As we grew, educating the public became critical to our success. 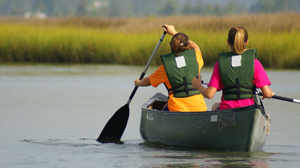 Students paddle a canoe during a Student Leadership course.

A U.S. Supreme Court ruling firmly established citizen suits as a force in protecting the environment under the federal Clean Water Act following CBF's arguments in the case of Gwaltney of Smithfield, Ltd. v. Chesapeake Bay Foundation, Inc. and the Natural Resources Defense Council. The Gwaltney meat-packing plant was a notorious polluter of the Pagan River, a tributary of Virginia's James River.

CBF released its first annual State of the Bay report, now a successful model that other organizations have adopted. 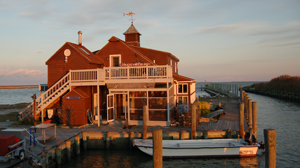 CBF satisfied growing demand for environmental education with the acquisition and renovation of two additional residential education centers at Port Isobel Island near Tangier, Virginia, and at Bishops Head, Maryland.

CBF responded to the Pfiesteria crisis by educating potential victims, the press, and legislators about the connection between pollution and human health risks and by monitoring vulnerable rivers and streams for outbreaks. 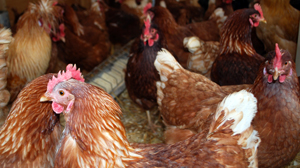 The State of Maryland, with intensive advocacy from CBF, passed the Water Quality Improvement Act. The legislation requires farmers to have nutrient management plans for nitrogen and phosphorous use on their farms.

CBF commissioned a University of Maryland study of toxic contamination in Baltimore Harbor, disseminated a list of toxic hot spots, and successfully pushed the Bay Program's Executive Council, which includes the governors of Maryland, Virginia, and Pennsylvania; the mayor of D.C.; the EPA Administrator; and the Chair of the Chesapeake Bay Commission, to sign a zero toxic contamination strategy for the Bay.