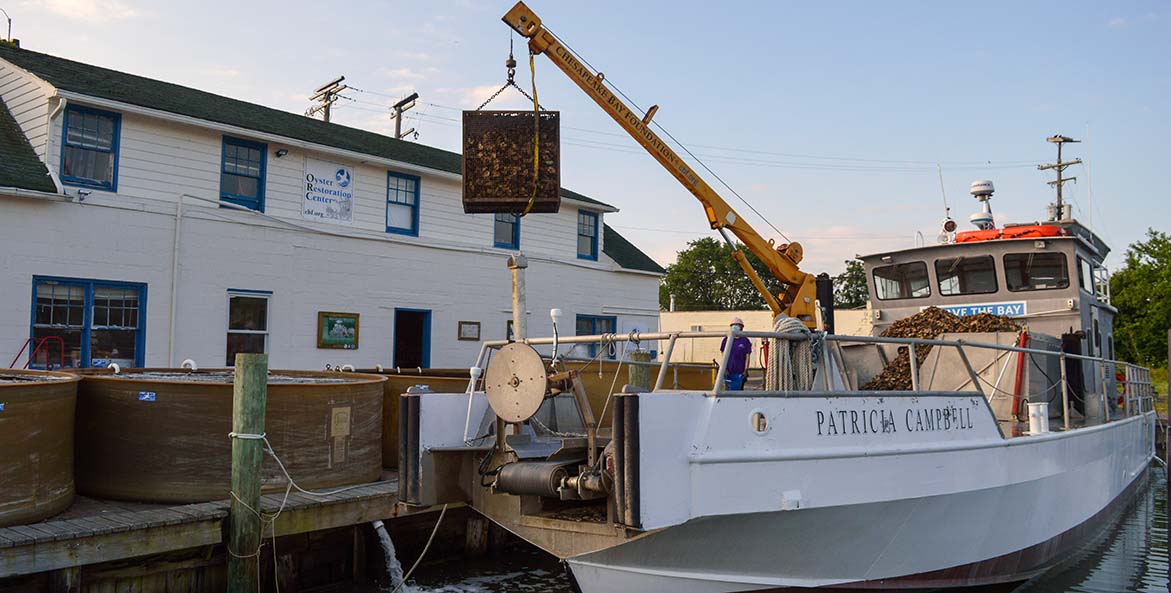 The Chesapeake Bay Foundation recognizes that saving the Bay is uniquely tied to restoring the native Eastern oyster, Crassostrea virginica. The Bay's native oyster population has been estimated at as low as one percent of historic levels, making restoration critical to help improve the Bay’s water quality and increase its economic viability.

In support of re-establishing this keystone species, CBF established its Maryland Oyster Restoration Center (ORC) in 2002. The ORC houses several large tanks for use in producing juvenile oysters, called 'spat.' It is also home to CBF's restoration vessel Patricia Campbell. The 60-foot boat transports and places hatchery-produced seed oysters onto sanctuary reefs throughout Maryland waters and carries oyster shell and other materials for reef construction. The ORC serves as the central location for all of CBF’s oyster restoration activities in Maryland.

The health and safety of our visitors, volunteers, supporters, and staff are our top priorities. All CBF offices and other facilities are closed through the rest of the year. However, limited events are re-opening with safety practices. All indoor event and meeting attendees must be vaccinated and wear masks. Public beach access is also closed at our Merrill and Brock Centers. Staff are working remotely. We will continue to assess the COVID-19 situation and update our website regularly regarding future events and building closures. Be assured that all decisions will be based on our confidence in providing a healthy and safe environment for participants, visitors, and staff.

What We Do at the ORC

ORC houses several large tanks for use in producing juvenile oysters, called 'spat.' These setting tanks are loaded with oyster shell, and then filled with Bay water. Oyster larvae, usually produced by the University of Maryland's Horn Point Laboratory, are then released into the tanks. After a few days, these larvae attach, or 'set,' onto the old oyster shells, at which point they are called 'spat.' CBF and our volunteers produce millions of spat at ORC each year, and transplant them onto restored sanctuary reefs.

Oyster shells are becoming increasingly scarce. Through CBF's Save Oyster Shells program, shells that would typically be thrown away are saved and used as homes for baby oysters (spat). Check our Save Oyster Shells page for dropoff locations and participating restaurants.

Get Involved with Maryland Oyster Restoration

What We're Doing in Maryland

Oysters are Thriving on CBF Reefs

Shell shaking involves cleaning oyster shells by shaking off the dirt and debris so baby oysters can successfully attach to and grow on them. This is activity is critical in our oyster restoration efforts. To find out more, visit our Shell Shaking Events page.