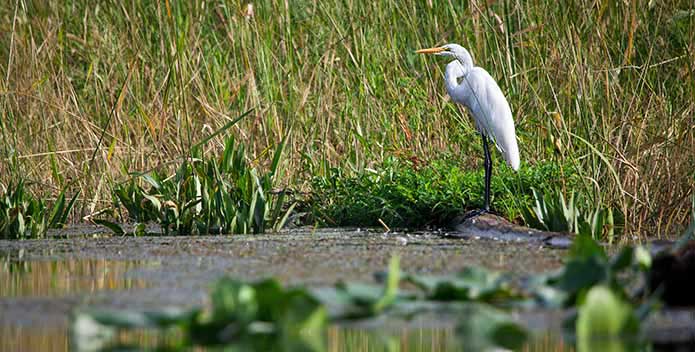 One of the Chesapeake Bay's Few Remaining Natural Gems

State fisheries biologists have called the Mattawoman Creek "the best, most productive tributary to the Chesapeake Bay." It is renowned nationally for its fish habitat. It is considered the best nursery for migratory (live in ocean but spawn in fresh water) fish in the entire Bay watershed. Once again it is being threatened. This time by the draft Comprehensive Plan currently proposed by the Charles County Planning Commission.

State and federal agencies have consistently characterized the Mattawoman watershed as exceptional in terms of its biodiversity and biological productivity. The Maryland Department of Natural Resources (DNR) has noted the creek's abundant underwater grasses and fish resources, including largemouth bass, rockfish, catfish, carp, bluegill, pumpkinseed sunfish, white and yellow perch, pickerel, and crappie.

It is home to more than 50 species of fish, as well as mussels, wood ducks and bald eagles. Its extensive wetlands and forest help support one of the healthiest food webs in the Bay, and help filter harmful nitrogen, phosphorus and other pollution.

The watershed's beauty and natural fecundity is priceless. Its fate will be a test of our resolve to save the Bay.

The watershed also has tremendous economic and cultural value. The commercial bass fishing industry in the Potomac River alone is worth $25 million a year in business.

The Army Corps of Engineers Watershed Management Plan characterized Mattawoman Creek as high risk due to the pressures of increased urbanization and loss of forest and wetland resources. Maryland's 1998 Clean Water Action Plan placed the Mattawoman in the top 25 percent of all watersheds in Maryland for having the highest loads of nitrogen and phosphorus per watershed acre. Portions of the watershed are also listed as impaired for nutrients and sediments on the state's "Dirty Waters" list.

In short, one of the natural gems of the Chesapeake Bay watershed is threatened once again.