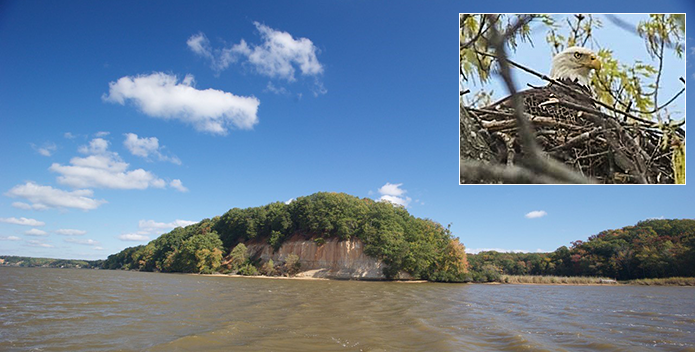 Fones Cliffs is an idyllic spot on the Rappahannock River. It is also a major habitat for nesting and migrating bald eagles. [inset]

Development in Critical Habitat on the Rappahannock River

Fones Cliffs defines a stretch of the Rappahannock River of immense environmental and historical significance and serves as a key hot spot for bald eagles. But the area is also the site of an enormous controversial proposed development.

The project experienced a terrible start with the illegal disturbance of 13.5 acres of forested land atop the cliffs in late 2017 without required permits.

The Virginia Attorney General's Office has filed a lawsuit against the developer, known as Virginia True LLC, for numerous violations first cited by the Virginia's Department of Environmental Quality (DEQ). 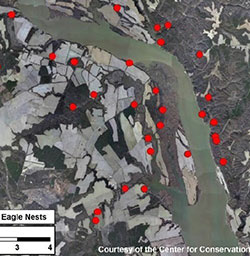 Red marks eagle nests along the Rappahannock River in the Fones Cliffs area.

The Center for Conservation Biology

A developer's failure to protect water quality would be of concern anywhere, but it's especially outrageous at Fones Cliffs. The extensive forest and high cliffs along this dramatic spot on Virginia's Northern Neck provide ideal hunting grounds for the hundreds of eagles that migrate to the area every year. The Rappahannock below is a major spawning and nursery area for fish, including striped bass, shad, and sturgeon. This bend in the river has played an important role in Virginia history dating at least to 1608, when Capt. John Smith noted a skirmish there with the Rappahannock tribe.

The developer illegally disturbed 13.5 acres of forested land adjacent to the cliffs without necessary sediment and erosion controls, destabilizing the area. This allowed bare soil and mud to run into the river and contributed to the collapse of sections of the cliffs during heavy rains in the spring of 2018. The land clearing only came to light after sharp-eyed neighbors and conservationists spotted the damage and notified officials, leading to a stop-work order from Richmond County in December 2017 and numerous violations from the DEQ.

Permits and environmental safeguards protect our quality of life, economy, and the waters we all enjoy. Fones Cliffs is a remarkable natural area, and we urge developers to respect this unique and sensitive site. CBF will continue to work with DEQ and Richmond County to ensure that developer violations are deterred and any future work on the site meets the strictest environmental standards.

Fones Cliffs has long been recognized for its natural beauty, and it has in recent years become a target for development. In 2015, developers asked Richmond County to rezone a 976 acre site atop Fones Cliffs to allow for a massive commercial-residential development. The original proposal included 718 homes and townhouses, 18 guest cottages, an 18-hole golf course, 116-room hotel, restaurant, a small commercial center, a skeet and trap range, equestrian center with stables, a 10,000 square foot community barn, and seven piers along the river.

CBF strongly opposed the rezoning, working with the community and local officials closely on the issue. However, in November 2015 the Richmond County Board of Supervisors ultimately approved rezoning the land to allow for the development. In 2017 the land was sold by Diatomite Corporation to New York-based Virginia True Corporation, the current developers.

The red marker shows the planned location of the Fones Cliffs development.