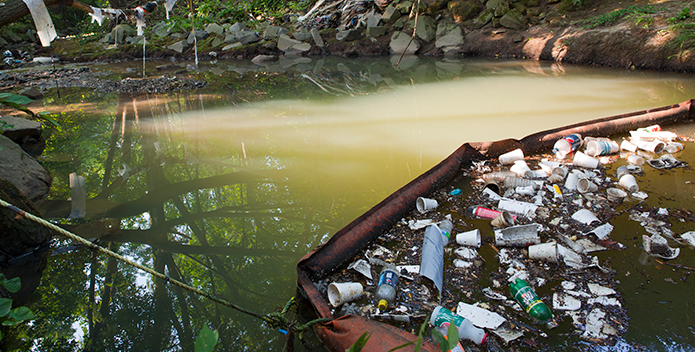 Garbage from storm runoff in the Hickey Branch of the Anacostia River in Washington, D.C., may eventually flow into the Chesapeake Bay.

Washington, D.C. has struggled with some very old underground infrastructure for a very long time. Back in the 19th and early 20th centuries, it was not uncommon for major cities to pipe all the polluted runoff from their rooftops and streets into an underground sewer system that was combined with the sanitary sewer system—it was all considered waste, after all, and the faster it got to a stream or river, the better. When simple sewage treatment plants came online, the surface runoff often helped dilute the sewage.  But as cities grew, the runoff during storms became a major input, and sewage treatment—which became ever more sophisticated—couldn't handle all that wastewater together. The result is that for many decades now, heavy rainstorms have deluged these treatment plants with stormwater runoff, causing them to overflow raw sewage into nearby rivers. Washington, D.C. was no different, and combined sewer overflow, or CSO, was (and remains) a major problem.

The federal Clean Water Act was supposed to lead to clean-ups of this situation, and after a series of lawsuits, in two consent decrees early in the last decade the District finally agreed to develop what's known as a Long Term Control Plan ("LTCP") as a remedy.  The LTCP largely relied on the construction of three massive "tunnels" under the city, along the Anacostia River, Rock Creek (Piney Branch), and the Potomac, to hold millions of gallons of polluted runoff during and after a storm, releasing it slowly. The estimated 25-year project cost was $2.6 billion.

But as the LTCP was being discussed those many years ago, CBF and others pushed for greener solutions that could more naturally infiltrate stormwater. Instead of such huge spending solely for what are essentially massive underground storage tanks (which store but don't really treat the runoff) and other "gray" infrastructure, we proposed a variety of greening projects that could capture and treat polluted runoff across the city. This kind of infrastructure goes beyond "storing and settling" to actual infiltration; it can be less expensive to construct and maintain; and it has multiple social and economic benefits for the city. Our proposals and commentary were ignored.

Beginning in 2010, DC Water took another look. It sought modification of the LTCP from the U.S. Environmental Protection Agency, proposing in 2011 that $10-30 million be used to install green infrastructure demonstration projects (such as large "rain gardens," planted infiltration trenches—bioretention filter strips—along city streets and sidewalks, more street trees, "green" roofs, and pavement that allows rainwater and snow melt to soak in) across the city to see whether such could substitute for or reduce the size of one or more of the tunnels.

After more preliminary investigation, by 2014 DC Water formally proposed its fully modified plan, which would spend $60 million in the Rock Creek watershed for 365 acres of green infrastructure and some downstream structural changes—instead of the Piney Branch Tunnel, and $30 million in the Potomac watershed in a hybrid plan to install green infrastructure for treating several hundred acres, reduce the size of the tunnel, separate sanitary from stormwater sewers on additional segments of the system, and add some treatment capacity at Blue Plains. See https://www.dcwater.com/green. Additionally, in May of 2015, the Department of Justice, the Environmental Protection Agency, and DC Water amended the 2005 consent decree that called for the construction of the tunnels, to allow for an additional five years to complete the new green infrastructure projects.

CBF has been and continues to be supportive of the extensive use of more natural systems to manage and treat polluted runoff across the Chesapeake Bay watershed. For D.C., it is important that the utility's plans be fully transparent, that time extensions granted for full compliance (from 2025 to 2030) be monitored and enforced, and that budgets be adequately secured.