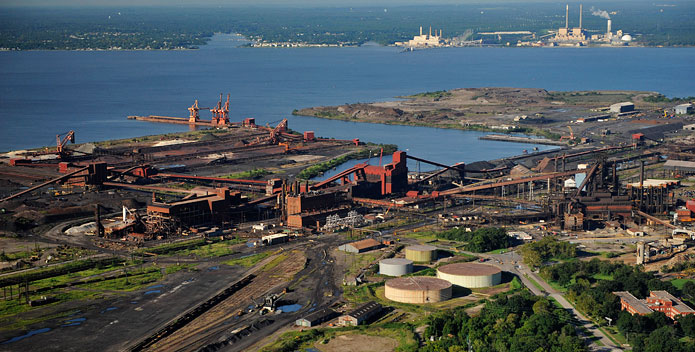 CBF filed a lawsuit in 2010 seeking a full investigation and cleanup of pollution at the Sparrows Point steel mill in Baltimore, Maryland.

The Chesapeake Bay Foundation (CBF) and the Baltimore Harbor WATERKEEPER (WATERKEEPER), filed a lawsuit Friday, July 9, 2010 against the current and former owners of the Sparrows Point steel plant, which has illegally discharged hazardous waste for decades. The complaint, filed in federal court and joined by several local residents, seeks a full investigation and cleanup of pollution. The plaintiffs are concerned for the health of neighbors of the plant, as well as the environment of Bear Creek and the Patapsco River.

"This plant has released toxic chemicals into waters where people live, swim, and fish, day after day, year after year," said CBF President William C. Baker. "It's time to draw a line in the sand.  Our lawsuit will petition the court to require the company to stop this pollution, and to do a full assessment of the risks to human health and the environment."

"The surrounding communities have unfairly suffered pollution for years from this site. Studies point to the extensive contamination of the river, yet Severstal has shown no intention of cleaning up their pollution.  That is unacceptable" said Baltimore Harbor Waterkeeper, Eliza Steinmeier. "We, the people, own this river and nobody—including Severstal or previous owners of the site—has a right to contaminate our river."

The complaint charges the current owner of the plant, Severstal N/A, and previous owner ArcelorMittal, with generating, storing, and disposing of hazardous waste at the site without a permit, and continuing to do so in violation of the federal Resource Conservation and Recovery Act and of state laws. The wastes, including benzene, chromium, lead, naphthalene, and zinc, have been found in Bear Creek and the Patapsco River. The chemicals could present an imminent and substantial endangerment to human health and the environment.

Contamination at the plant and in sediments surrounding the facility has been well documented. At one location, benzene, a human carcinogen, has been found in groundwater at levels 100,000 times the government's Maximum Contaminant Levels-concentrations. Sediments from some areas surrounding the facility are toxic to aquatic organisms. In addition, concentrations of some contaminants in sediments and groundwater exceed screening levels for human health.

Andrew Fan, EPA Project Coordinator for Sparrows Point, told a community gathering June 24 that one major source of offsite pollution at the mill, an underground hydrocarbon plume flowing into Bear Creek, is much like the light crude oil spill in the Gulf.

At issue is what's to be done. In May, 2009, CBF and the Harborkeeper filed a Notice of Intent to sue. Since then, federal and state agencies pushed Severstal toward a cleanup, but Severstal resisted a full off-site assessment and cleanup. That is unacceptable. Residents live all along Bear Creek, and often swim, fish, and crab in waters where the sediment is highly toxic in places.

"It's gotten to the point people are afraid to get in the water," said Will Strong, a resident and co-plaintiff who lives on Bear Creek. He said one of his neighbors recently fell in the water and immediately stripped off all his clothes, not knowing to what harm he might be exposed."

"Residents need to know whether Bear Creek and the Patapsco River are safe. No one should have to wait so many years for a risk assessment. A full investigation should begin immediately, and any necessary remediation should follow," said Dr. Beth McGee, CBF Senior Water Quality Scientist.

Nearly a century of industrial activities at the Sparrows Point Industrial Complex has left behind a legacy of toxic contamination that rivals many Superfund sites. The original owner, Bethlehem Steel Corporation (BSC), operated on the roughly 2,300 acre site for more than 80 years, making iron and steel and building ships.

In the late 90's, the Environmental Protection Agency (EPA) and the Maryland Department of the Environment (MDE) sued BSC for numerous hazardous waste violations. As a result, in 1997 a Consent Decree was issued that stipulated various cleanup and assessment requirements. The terms of the Consent Decree have not fully been met.

Severstal has made some progress after CBF and the Harborkeeper threatened a lawsuit in 2009, and after EPA and MDE increased enforcement of the Consent Decree. Severstal is expected, for instance, to begin preliminary cleanup in the coming months of the hydrocarbon plume at Coke Point section of the plant. But the steps do not go far enough. Severstal has challenged its legal obligation to investigate contamination that has migrated beyond the plant's borders, and disputed EPA and MDE’s authority to require the company to undertake such an assessment. CBF and the Harborkeeper believe legal pressure is necessary to prompt full and speedy corrective action.

The lawsuit asks the court to order Severstal and ArcelorMittal to fully investigate offsite contamination, take emergency measures to more fully prevent pollution leaving the facility, and to remove and remediate off-site contamination, among other measures.

A cleaner Bear Creek and Patapsco River could improve the health and welfare of Dundalk residents. Habitat will improve for fish, crabs, and other wildlife in the water. The area will become more attractive to residents, visitors, and business customers. Several business owners are co-plaintiffs in the lawsuit.

"My frustration is I want this river cleaned up," said Strong, who has lived on Bear Creek for most of his life and within the past few weeks watched peeler crabs die after "dark water" rolled through. "I've seen some good times but these are really getting to be bad times."

Find out the status of the case in CBF's list of Active Cases. 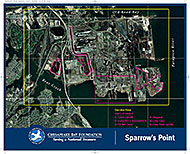 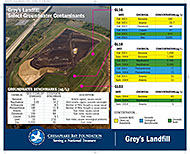 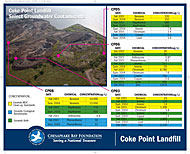 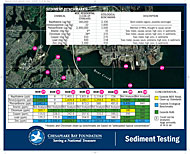