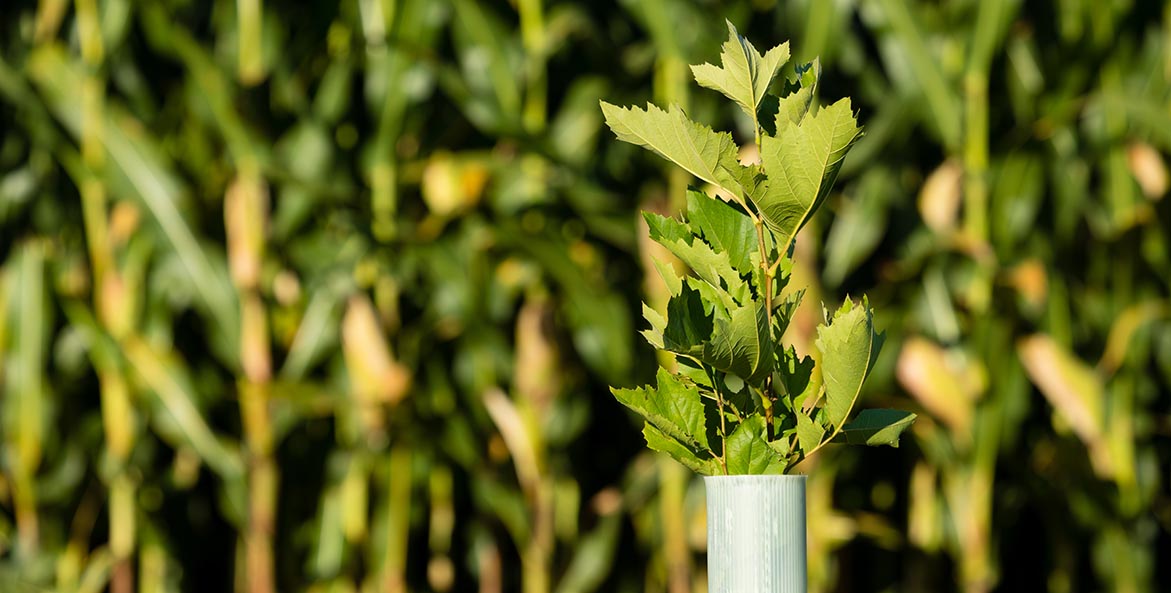 A young sapling is planted near farmland as part of the Keystone 10 Million Trees Partnership.

A planting day finds Laurie Crawford with a car full of tree stakes, protective tubes, and saplings. She delivers supplies—and snacks—to as many as three separate sites where volunteer crews wait at the ready to put roots in the ground. "The logistics," she says with a laugh, "are me running around with a lot of trees."

Crawford is the Executive Director of the Lebanon Valley Conservancy. Over the past two decades, the conservancy has preserved nearly 1,000 acres of farmland and wildlife habitat in Lebanon County, Pennsylvania, through conservation easements with local landowners. Now, it's an early partner in the Keystone 10 Million Trees Partnership, which CBF launched and coordinates.

We have students, stay-at-home moms, retired people—we have a true gamut, and we're spreading the message across generations.

Recognizing the critical role forests play in reducing water and air pollution and mitigating the effects of climate change, both locally and downstream in the Bay, the partnership sets an ambitious goal to plant 10 million trees in Pennsylvania by the end of 2025. The Commonwealth's patchwork of small farms and municipalities means local connections are especially important for making on-the-ground progress.

Lebanon County is home to 140,000 people and located roughly 30 miles east of Harrisburg in the Susquehanna River watershed. But the county can get overlooked when it comes to conservation funding, says Crawford. Support from CBF and its members allowed the conservancy to plant hundreds of trees in streamside areas—work it otherwise couldn't accomplish.

"We're a conservancy with one employee, so we thrive on partnerships," Crawford says.

Word of mouth is catching the interest of more landowners, including a sportsman's association that planted 300 trees this fall. And the plantings serve as a bridge to engage a wide segment of the Lebanon community in land and water stewardship. Volunteers bake brownies for the work crews. Kids collect leaf rubbings to learn about the trees.