Plants of the Chesapeake 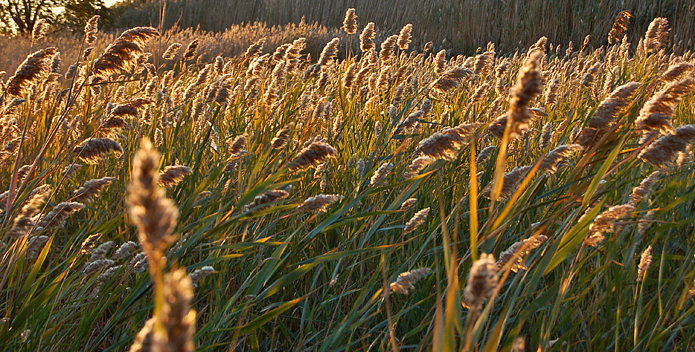 Phragmites is a non-native invasive wetland grass that has out-competed important native grasses throughout the Bay watershed.. 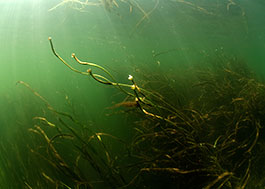 Like wetlands, underwater grasses (known as submerged aquatic vegetation or SAV) serve as habitat for aquatic animals, and as a food source for waterfowl. And like other Bay grasses, they produce much-needed oxygen. But perhaps their most constructive feature is their ability to trap sediment that can cloud the water. As waves roll into grass beds, the movement is slowed and energy is dispelled, protecting shorelines from erosion. During the growing season, Bay grasses take up and retain nitrogen and phosphorus, removing excess levels that could fuel unwanted growth or algae.

Fourteen species of grasses are commonly found in the Bay or nearby rivers. Five of the most common are wild celery, found in freshwater; sago pondweed, redhead grass, and widgeon grass found in more estuarine water; and eelgrass found in the lower Bay in saltier water. Salinity, water depth, and bottom sediment determine where each species can grow. Survival of Bay grasses is affected by the amount of light that reaches the plants. Poor water quality resulting in less light penetration is the primary cause for declining grasses. Algal blooms, as a result of too much nitrogen and phosphorus, also cloud the water and reduce sunlight to SAV.

The absence of SAV translates into a loss of food for many Chesapeake Bay species, but bay grasses have rebounded steadily since their lowest point in 1984.

Find out more about underwater grasses in the Chesapeake. 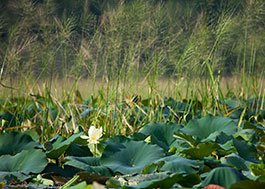 Tidal wetlands are dominated by nonwoody or herbaceous vegetation and are subject to tidal flooding. These wetlands have a low marsh zone (flooded by every high tide) and a high marsh zone (flooded by extremely high tides). Plants such as smooth cordgrass are found in the low marsh zone of brackish and saltwater marshes. The high marsh zone may be dominated by saltmeadow cordgrass, black needlerush, saltgrass, or marsh elder. Freshwater marshes also have low and high zones. Along the water's edge, you may find wild rice, arrow arum, pickerel weed, and pond lily. In the high zone, cattail and big cordgrass may be prevalent. 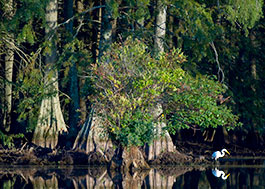