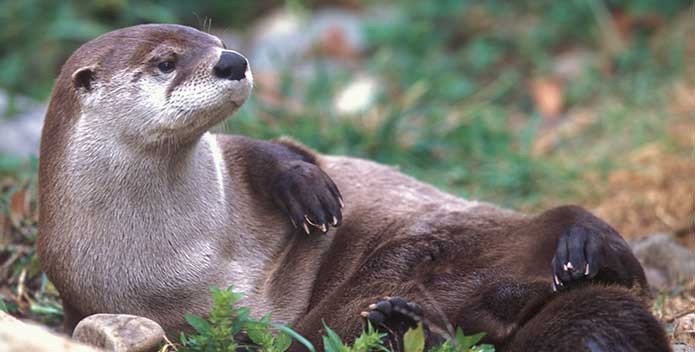 Once trapped to near-extinction for their glossy fur, river otters have made a comeback. Populations in Pennsylvania have been boosted by the introduction of otters from Maryland's Eastern Shore.

With the help of remote video cameras along two Pennsylvania rivers, researcher Sadie Stevens has spent hours filming the droll capers of wild river otters. Her sleek subjects inhabit streams throughout Chesapeake country, but are so elusive that few have the opportunity to view them as she does.

Stevens' window into otters' secret lives reveals their well-known penchant for wrestling, rolling, sniffing, and sliding in mud and snow. She's even grown fond of their "latrine dance," a foot-pumping ritual performed while depositing scat. "Otters are great to watch," she says of the footage.

Once, the Bay region teemed with otters. Two centuries ago, naturalist John James Audubon could count 46 of the "singular quadrupeds" on a single river in two hours. But unregulated trapping for their glossy brown fur swiftly exhausted otter populations across the continent.

Chesapeake marshes remained a refuge, but the weasel relatives, which average about two pups per litter, could not sustain the heavy harvest. Trapping pressures were compounded by the growing loss of wetland and riparian habitats, as well as water pollution from mining and industrial development.

By the 1980s, only remnant populations survived. In Pennsylvania, a small community of 350 persisted in the Pocono Mountains, isolated from their Bay-area brethren by cities and dams along the Susquehanna River. But graduate student Tom Serfass, encouraged by water quality improvements in the area, thought that reintroduction was possible, and pioneered the first restoration efforts. Now a professor at Frostburg State University, Dr. Serfass recalls feeling nervous when he freed his first four otters from their cages into Kettle Creek, a tributary of the west branch of the Susquehanna, in 1982: "We didn't know if they were going to survive."

Radio telemetry data from the released (and thriving) otters restored his confidence. The program grew quickly, ultimately releasing over 150 animals, including 40 captured from Maryland's Eastern Shore.

Actual counts of the notoriously shy creatures are hard to come by, but every Pennsylvania watershed now hosts river otters, and populations are believed stable or growing in other Bay states.

Serfass urges continued vigilance throughout the Bay watershed. "It's great to point to successes," he says, such as well-regulated trapping, "but we still have abandoned mine drainage...We're not making any more of these [otter] habitats."

Otters play a vital role in their own protection. Because of their sensitivity to human activity, says Frank Felbaum, former executive director of Pennsylvania's Wild Resource Conservation Fund, "they're an indicator species to the nth degree. They'll be out of an area before people know what's going on."

The successful reintroduction has cast the curious, playful creatures in a new role as conservation icons. Otter releases came to symbolize river cleanup, says Serfass, because "Pennsylvania realized otters' appeal promotes conservation—not just of otters, but conservation of other species and associated habitats." He advocates more public education about otters in aquatic environments, especially for schoolchildren. The reason is simple, he states. "The river otter is a very attractive face that can be put forth as a reason to conserve the bigger picture."