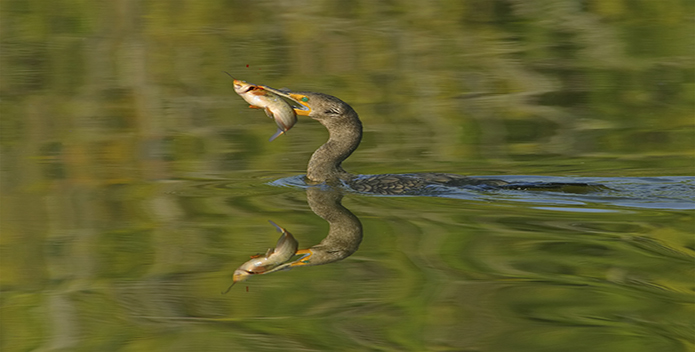 Cormorants have been associated with evil in Western literature because of their "gluttonous appetite." But, they are miraculous in their own way, and, in Asia, are beloved and trained as pets.

The Miraculous Comeback of a Misunderstood Bird

Double-crested cormorants are peculiar-looking fishing birds—with black feathers; long, snake-like necks; webbed feet; and hooked beaks. They often have a pair of shaggy tufts—double crests—on their heads that give them the appearance of disheveled professors. Cormorants nest in colonies and sing in grunting croaks that sound like a chorus of pigs.

Around the Chesapeake Bay, you may have seen cormorants standing on channel markers in their trademark pose: with their black wings held out sideways, to dry in the sun. It is this vampire-like posture—and the fact that cormorants eat fish—that has made the birds reviled by fishermen and misunderstood for centuries.

Long a symbol of bad luck and evil in Western literature and myth, cormorants have been persecuted and slaughtered by fishermen and governments, according to a new book called The Devil's Cormorant by Richard J. King.

The U.S. Fish and Wildlife Service has a policy of destroying cormorant eggs in some areas of the Chesapeake Bay. The Humane Society protests that this killing of cormorants is inappropriate, because cormorants are a native Bay species.

"It is really interesting to see how far back it goes, this sort of anticormorant feeling in literature and art," King said. "Milton famously described Satan sitting like a cormorant on the tree of life. Shakespeare uses cormorant imagery four times in his plays. And in Shakespeare's time, being 'cormorous' meant being greedy or insatiable."

Much more recently, a sports fishing blog described the birds as "gangly, gluttonous rats with wings." The article's headline: "I Hate Cormorants."

Despite this bad rap in Western culture, cormorants are miraculous and wonderful in their own way. They migrate thousands of miles, swim deep beneath the water with their webbed feet, and are trained as fish-catching pets in Japan and China.

Even more amazing is the species' Phoenix-like resurrection. After being nearly wiped out in the U.S., cormorants started multiplying in the 1970s after the federal government banned the pesticide DDT and outlawed hunting cormorants in 1972.

Maryland was home to zero nesting cormorant pairs in the 1970s. But by 1990, there were 55 couples reproducing here. And today, there are about 4,000 nesting pairs in the state, according to David Brinker, a wildlife biologist with the Maryland Department of Natural Resources. Thousands more are breeding in Virginia's part of the Chesapeake Bay.

"I view cormorants as a good sign," Brinker said. "Here's a new species that adds to the diversity of fish and wildlife populations."

Double-crested cormorants have long migrated through the Chesapeake Bay in the spring and fall, as they flew from their nesting grounds in New England to their wintering areas in Florida and back again.

Since the 1970s, their nesting territory has spread south from New England, as the bird population has multiplied. But whether cormorants ever nested in the Chesapeake Bay in the past is a matter of dispute.

One author, back in 1610, described cormorants in Virginia rivers "in such abundance as are not in all the world to be equaled."

Bryan D. Watts, Director of the Center for Conservation Biology, said it is "absolutely possible" that cormorants nested in the Chesapeake Bay hundreds of years ago, before being driven away by fishermen or other factors.

"Many water birds have expanded and contracted their ranges up and down the Atlantic Coast in recent decades," Watts wrote in an e-mail. "So there is no reason to believe that cormorants couldn't have done that several times in the past."

There are some nuisance issues associated with cormorants. The birds tend to nest in such densities that their waste kills grasses and trees on parts of the islands where they breed. They eat about a pound of fish a day, but not enough to impact overall fish populations or the fishing industry, scientists say.

Nevertheless, in 2013, the U.S. Fish and Wildlife Service intentionally destroyed about 3,200 cormorant eggs on Poplar Island in the Chesapeake Bay.

Peter McGowan, a wildlife biologist with the federal agency, said he and his colleagues sprayed a portion of the colony's eggs with vegetable oil, which suffocates the embryos. He said wildlife managers worry the booming cormorant population would crowd out other, more threatened birds. Common terns, glossy ibises, and snowy egrets are competing with the cormorants for nesting space, McGowan said.

"There are other species that are (more threatened)," McGowan said. "I wouldn't say they have preference, but they utilize habitats that are quickly being lost in the Chesapeake Bay. And we need to focus on trying to provide the nesting habitat for those [threatened] species, otherwise we are going to lose those birds from the Chesapeake Bay."

Stephanie Boyles Griffin, a director at The Humane Society of the United States, said the destruction of cormorant eggs is inappropriate—and an example of how the birds are still being unfairly persecuted.

"The Humane Society of the United States is strongly opposed to any lethal efforts to control cormorants," Griffin said. "They're a native bird. The reason that fishermen and wildlife managers want to manage them at all is because of land-use decisions that we as humans have made. We have taken up residence in most of the coastal areas of the Chesapeake Bay, and this is all colonial nesting and shorebird breeding ground."

Development and rising sea levels are forcing birds to compete for a shrinking number of secluded waterfront nesting sites. People are trying to pick the winners and losers in this competition, and a misunderstood black bird is paying a fatal price.