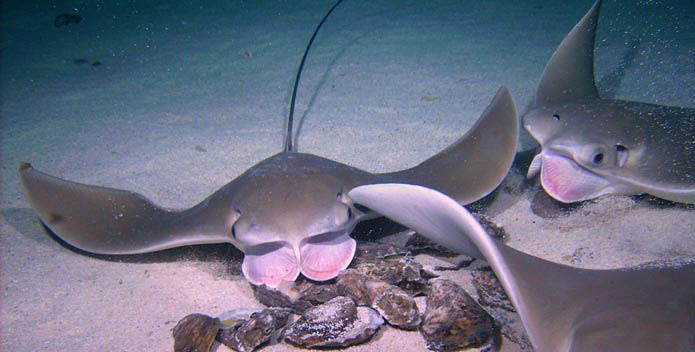 Cownose rays eat mollusks including oysters, razor clams, macorma, and softshell clams. They feed in the Chesapeake from May to October.

Every May, flocks of winged creatures soar just beneath the waves from the Atlantic Ocean into the Chesapeake Bay. The tips of their kite-shaped bodies slice the surface like shark fins. But they are not sharks—they are members of the same ancient family of fish with cartilage skeletons and sandpapery skin. They are called cownose rays, or Rhinoptera bonasus. The name comes from their almost bovine snouts, beneath which are slit-like mouths that vacuum up clams, crabs, oysters, and other hors d'oeuvres on the Bay's bottom.

Like sharks, the so-called "Chesapeake Stingrays" are feared and demonized. Rays are virtually harmless to humans, except for the spines at the base of their tails, which can deliver painful stings to people who step on them or handle them the wrong way.

But flocks of cownose rays gobble up oysters planted in underwater farms. And so advocates of expanded oyster aquaculture argue that they are a major obstacle to the industry. Claiming that ray populations have grown too large, oyster growers launched a campaign to reduce populations of this "pest" through commercial fishing and the slogan: "Eat a Ray, Save the Bay."

Robert Fisher, Fisheries Specialist at the Virginia Institute of Marine Science, is among those worried that killing rays to save oysters could go too far. After all, he said, rays are a species native to the Chesapeake Bay—and not an alien invader.

"They are definitely a misunderstood species, and unfortunately they have been labeled a villain, as far as the shellfish growers are concerned," Fisher said. "I commend industry for becoming educated on the biology of the ray and approaching the issue in a responsible manner."

He and others warn that a commercial fishing industry targeting rays—if not carefully controlled—could quickly wipe the species out, because they reproduce slowly. Rays take six to eight years to mature, and females give birth to only one pup each year.

As an alternative, Fisher and his colleagues are studying non-lethal methods of deterring rays from oyster beds. "Ray-shellfish interaction is the problem, not the ray," Fisher said.

Fisher and Roger Mann, Director of Research at the Virginia Institute of Marine Science, are proposing to work with oyster aquaculture companies to discourage rays by planting oysters under layers of older shells.

Fisher has also been experimenting with more exotic techniques, including "bubble curtains." These are produced by tubes that pump out streams of air in protective rings around oyster beds. Oddly enough, bubbles seem to confound rays.

Fisher also has been testing the use of magnetic fields around oyster beds. Magnets mess with a sensory system, called the Ampullae of Lorenzini, found in both rays and sharks. Tiny pores ringing their mouths detect faint electrical impulses from their prey—picking up, for example, the heartbeat of a flounder trying to hide under sand.

Another innovative approach: ray repellent. Fisher has been working with other researchers to inject the odor of rotting rays into their would-be prey (such as crabs), which appears to repulse the ray.

This ghoulish perfume has proven effective in driving away sharks. "It definitely provides a flight response," Fisher said. "The ray or the shark senses its own death." Growing oysters in cages also protects shellfish from rays.

In November 2010, Fisher completed a report for the National Oceanic and Atmospheric Administration (NOAA) that challenged conventional wisdom about rays. For example, he questioned an influential 2007 article in the journal Science that claimed a ray population boom.

Although some oyster farmers consider rays as oyster-eating machines, in fact "oysters... were not found to make up a significant portion of the diet of cownose rays," according to Fisher's NOAA report. More common as prey are thinner-shelled species, such as razor clams, macoma, and softshell clams.

A. J. Erskine, President of the Virginia Seafood Council, said he does not believe that oysters make up only a small portion of the ray diet. But Erskine agreed that alternatives to killing rays are worth investigating. The crucial thing, he said, is that action is taken to control rays. He explained that rays not only consume oysters, but also rip up underwater grasses that are important habitat for fish, crabs, and other forms of life.

"For the sea grasses, for all these shellfish, we need to be able to control this predator," Erskine said. "And if we don't, then I don't think we are going to be able to realize aquaculture in the state of Virginia and Maryland to its full potential."

Tommy Leggett, CBF's Virginia Oyster Restoration and Fisheries Scientist, said that recent history provides vivid examples of how rays can be a problem for not only commercial oyster aquaculture, but also for oyster restoration projects.

In 2006, CBF planted 650,000 oysters as part of a restoration project in the Piankatank River, only to see the oysters quickly devoured by rays, Leggett said. Two years later, CBF worked with the Cowart Seafood Company to plant about a million oysters in the York River, and rays again vacuumed them up.

"All of the big players (in Virginia aquaculture) have been severely impacted by cownose rays," Leggett said. "There are some proponents who would like to annihilate the whole species. But we need a more balanced approach to managing the Bay's resources."

Harvesting the slow-reproducing rays could have unintended consequences, conservationists warn. When California's oyster growers launched a program to eradicate oyster-eating bat rays, the campaign appeared to backfire and cause more oyster mortality, according to ray researchers and Sonja Fordham, President of Shark Advocates International. As it turned out, the California rays were not eating many oysters, but they were eating oyster predators, such as crabs, which became more numerous.

"This issue is not new," said Dean Grubbs, a researcher at Florida State University. "About every 10 years for the last 40 years, there has been an outcry from the oyster industry that ray populations have increased and are destroying oyster beds. But there have always been a lot of cownose rays in the Chesapeake Bay."

The explorer Captain John Smith encountered huge schools of cownose rays. In fact, a ray famously delivered a venomous sting to Smith (which was so painful his crew feared he would die) at a place in Virginia now called "Stingray Point."

An Ecosystem Out of Balance

A key to resolving the ray-oyster conflict may be restoring the balance of predators and prey in the Chesapeake Bay. One theory is that rays primarily fed on soft clams, until soft clam populations were decimated by overharvesting and disease—and so rays increasingly turned to oysters.

Charles "Pete" Peterson, Professor of Marine Sciences at the University of North Carolina, argues that overfishing of sharks removed a predator that kept ray populations in check. "The answer is better shark management, and we are moving toward that," Peterson said.

In the end, the solution may have many components. Among the steps needed are studies of ray populations, to see if they are on the rise, and how vulnerable they might be to overfishing. Nonlethal techniques to repel rays from oyster farms and restoration projects could work alongside a limited harvest of rays, as long as the harvest is carefully managed to ensure sustainability.

Education of the public is also important, to let people know that those shark-like tips rising from the water are not signs of monsters to be feared and hated. The wings beneath the waves are part of a natural ecosystem older than the Chesapeake Bay itself that glides with its own peculiar beauty and grace.