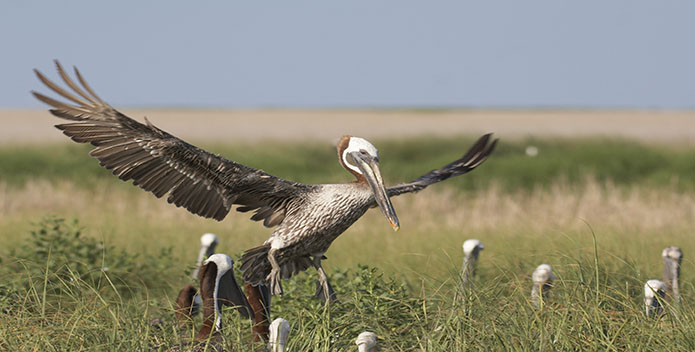 Once stalked by plume hunters and poisoned by DDT and other pesticides, brown pelicans have recovered and expanded beyond their historic range. They now nest on Maryland islands in the Bay, and scientists predict colonies may soon appear in New Jersey.

Moving On Up: At Home on the Bay

To most Bay residents, the brown pelican's outsized beak is just another comical trait of this popular but gawky bird. Two decades of banding pelican chicks, however, have given Dave Brinker, an ecologist for Maryland's Department of Natural Resources, a different perspective.  "They're not dainty," he says of the almost-Canada geese-sized young he handles. "That big bill has a long and effective nail at the tip."

Besides dodging defensive jabs by the chicks, Brinker and his banding team suffer through biting insects, boot-sucking mud, and stifling summer heat to reach nesting colonies. "It's fun," he says, "but you have to really want to do it."

Brinker began his banding study in 1987, when he found the first brown pelican nests ever recorded in Maryland on Tizzard Island in Chincoteague Bay. That discovery made national news, celebrated as evidence that the once-endangered bird was recovering from the egg-thinning effects of DDT. "It was cool!" Brinker remembers.

Neither American Indian refuse heaps nor early explorers' journals contain any evidence of brown pelicans nesting on the Chesapeake Bay. Many attribute the species' recently expanded range to the warming climate, which offers a longer season for the young to become self-sufficient. It takes a long time to raise a pelican chick, Brinker explains. Young birds must be nine weeks old to fly, then must develop the skills and muscle strength to catch enough fish for survival. Until the latter half of the twentieth century, he says, the Bay's frost-free period was too short to accomplish that.

Now, up to 2,500 pelican pairs nest on Chesapeake islands. The fastest population growth came in the 1990s, when storms destroyed nesting habitat in the Carolinas. Displaced birds ventured north, says Brinker, where "they found the Bay. They found the menhaden."

From as high as 70 feet up, brown pelicans can spot menhaden and similar schooling fish below the surface. Nature photographer Ian Plant describes their feeding dive as a full-speed, twisting plunge. Air sacs under the skin cushion the impact, and the capacious throat pouch scoops up almost three gallons of water and fish. Contrary to myth, the bird cannot carry away its catch in the pouch. Instead, it squeezes out the water and swallows its meal before taking off again. "They're not the most elegant birds," says Plant, "but they get the job done."

Plant photographed scores of pelicans on South Point Marsh Island for his new book, Chesapeake: Bay of Light (Mountain Trail Press, 2007). Traveling by sea kayak, he got close enough to their bustling colony to hear hundreds of nestlings hissing and clacking their bills. Pelican parents feed their chicks by coughing up partly digested silversides, and the growing birds need as many as three to five menhaden a day. "They look prehistoric," says Plant of the downy white young.

All that effort seems to be paying off for the Chesapeake's pelicans. Bay pairs raise, on average, one and a half to two chicks per nest—more than some Florida populations, which average less than one chick per nest. Ecologist Paul Spitzer, who has studied the relationships between Bay birds and menhaden, speculates that the South Point Marsh colony's success may stem from the surrounding waters, which are rich with menhaden and too shallow for purse-seine fishing. Brinker, too, attributes reproductive success to a healthy food supply, but cautions, "If the forage they feed on is to decline significantly, we'd see declines in pelicans."

The birds face other threats, especially in the long term. Plant and Brinker fear that rising sea levels could erode the beaches at South Point Marsh and other nesting areas. "Warming will expose more area to occupy, but the associated sea level rise will take the small islands they need to breed," says Brinker.

A once-robust colony on Fisherman's Island, where four of Virginia's first nests were found in 1987, is already shrinking. Pam Denmon, a biologist at the Eastern Shore of Virginia National Wildlife Refuge, says raccoons are the likely culprits, but points to dangers from creatures that can be tougher to manage than the masked bandits: human sightseers. Prominent signs in the refuge warn that the area is closed to visitors during nesting season. "If people cause the pelican parents to fly," explains Denmon, "gulls would go for the eggs in a minute." To protect island-nesting birds, she says, "One of the best things you can do is keep your distance."

Some view pelicans as an indicator species, an animal that should be monitored closely for changes in population or movements. "Because of their position on the food chain, they're a good indicator of the health of the Bay," Brinker explains. Photographer Plant sees another value. "I think people want to protect wildlife that they grow emotionally attached to," he says, and charismatic wildlife help people feel connected to the whole ecosystem. With their ungainly bodies and dramatic dives, says Plant, "Pelicans fill the bill."

DESCRIPTION: The brown pelican, or Pelecanus occidentalis, is a large, dark, water bird with a long, heavy bill and storied throat pouch. Mature adults have white heads with a brown streak at the back.

SIZE: The average brown pelican weighs about eight pounds and has a six-to-seven-foot wingspan. It is lighter and more slender than North America's other pelican species, the white pelican, but still impressively large.

WHERE TO FIND THEM: Check piers, pilings, and sandbars on Bay shores and tidal rivers for perching birds. Flocks are easy to spot in the air, flying in lines close to the water, or circling high on thermals. Bay-nesting pelicans migrate to Florida and the Caribbean in winter.

NESTS: Pelicans prefer to nest on predator-free islands in dense colonies, on the ground or in low trees. Females typically lay three chalky white eggs, beginning in April. Both parents incubate and care for young until August or September.