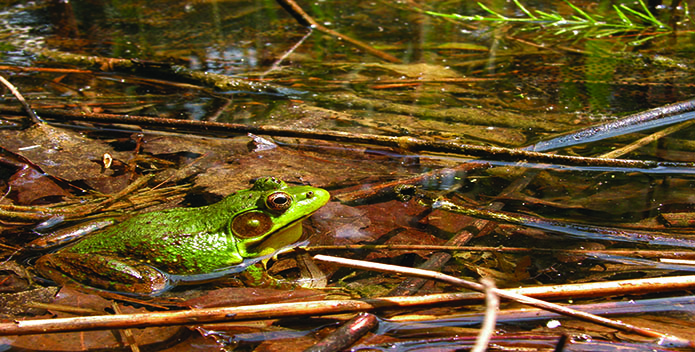 The most common frog in the Chesapeake region, the northern green frog inhabits freshwater ponds and wetlands. It has portected status, meaning it cannot be harmed or killed. Male green frogs have larger external eardrums (tympanums) than females. Tympanums appear as raised circles behind and slightly below the eyes.

At Home In the Bog

On a warm evening, on any one of thousands of streams and ponds dotting the Chesapeake landscape, you'll hear its distinctive call—a cacophonous twang that sounds like a loose banjo string. The northern green frog, one of the region's most common amphibians, is making itself at home.

And that's a good thing, because frogs are a prime indicator species, exceptionally sensitive to changes in their environment. With their thin, porous skin, they're particularly susceptible to toxins in water and air. When they disappear from an area, it can be an early warning sign of dangers in the larger ecosystem.

Pollution is not their only threat. Frogs are also endangered by the ongoing loss of wetlands and forests. If their natural breeding grounds are disturbed or eliminated, the frogs will find it harder to survive.

Rana clamitans melanota, the northern green frog common to the Bay region, is a medium-sized frog about two to four inches long. It lives only in freshwater, mostly in shallow ponds, ditches, and grassy swales. Its most distinctive feature is a pair of ridges along its back. It's one of the most active of all native frogs, and known to make enormous leaps. For many youngsters, the big-eyed, slightly slimy creature is one of the first wild animals they encounter, a memorable introduction to the wonders of the natural world.

Once their remarkable metamorphosis from tadpole to mature frog is complete, frogs breathe with their lungs on land, using the muscles in their throats. Underwater, they breathe only through their skin, which contains a dense web of blood vessels that carry oxygen to the rest of the body. Lacking scales, they rely on a coating of mucus to keep their skin moist.

"Green frogs are a good species to monitor to see trends and declines," says J.D. Kleopfer, a Wildlife Diversity Biologist with the Virginia Department of Game and Inland Fisheries, "but they're cyclical in nature. People often call me and say, 'Last year I heard lots of frogs in my yard, and this year, I don't hear any at all.' I explain that they're changeable; this could be a boom year because of a wet spring, and next year it will change. You have to look at long-term data to see any trends." This year, he notes, "frogs got off to a really good start because of the wet weather. There's probably some localized decline, but we don't have any information yet."

Biologists are keeping a close watch on frogs these days, looking for signs of a rampant fungal infection called chytridiomycosis (chytrid for short) which has devastated frog populations around the globe. National Geographic magazine quoted Australian researcher Lee Berger as saying the outbreak and resulting loss represented "the most spectacular loss of vertebrate biodiversity due to disease in recorded history." It reported that chytrid is now found on all continents where frogs live, in 43 different countries and 36 U.S. states. However, frogs in the
Chesapeake region, including the northern green, seem to be unaffected.

"Almost everywhere we test in Virginia, we find positive signs for chytrid," Kleopfer says. "We think it might be part of natural fungal fauna, but we have not seen massive die-offs like those happening out west or in Central and South America. Our frog population might not be immune, but it's tolerating chytrid. We're not sure why. It seems to be species-specific, particularly devastating for mountain-type frogs. It might be because they're more susceptible to exposure to ultraviolet light. There are a lot of questions that have to be answered."

Frogs and amphibians all over the globe are increasingly stressed by water pollution, climate change, and disease. Scientists are sharing information to monitor the health of their populations worldwide. Recently, Frogwatch USA, a project managed by the National Wildlife Federation and the American Association of Zoos and Aquariums, recruited volunteers to collect data on frogs in their region. Citizens listened for frog Calls several times a week during breeding season, which runs from early spring to late August, and submitted their findings for evaluation.

"It would be a sad world without that loose banjo string sound," said CBF Senior Naturalist John Page Williams. "Our responsibility is to be good stewards of this planet, so that we can protect not only northern green frogs, but ourselves.