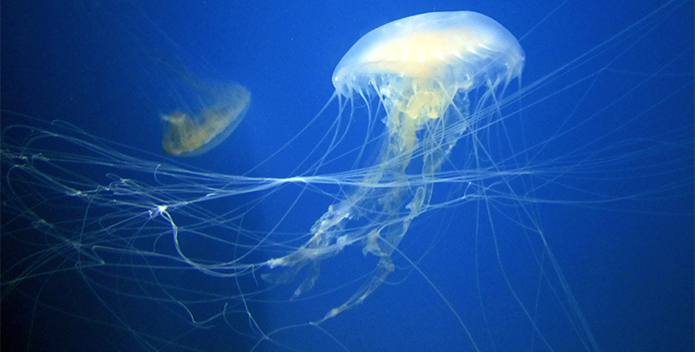 Although both Atlantic sea nettles and comb jellies eat larval oysters, the sea nettle spits them out unharmed. And, sea nettles help protect baby oysters by eating comb jellies during the summer months when oyster larvae are most abundant.

I saw it just a second too late. I remember as a teen squeezing my eyes shut as I dove off the side of our boat into the Severn River. The tentacles wrapped around my head and shoulders as I pierced the surface of the warm water. The venom left stringy red welts across my face and chest. What were these sea nettles doing in my river?

I know now that jellyfish do play a role in our Bay's ecosystem. These drifters graze on zooplankton, keeping populations of some smaller animals from growing out of control.

In the near future, jellyfish worldwide may be heading for a population explosion. Scientists point to the out-of-balance state of our planet's oceans. Jellies, it turns out, have been around for some 600 million years, and they are very good at adapting. Better than most fish.

While, jellyfish tolerate the effects of the pollution we dump into our water, fish populations decline. With fewer of the jellyfish's natural predators and jellies snapping up more food, a vicious cycle begins. This is the theme of the "Jellies Invasion" exhibit at Baltimore's National Aquarium.

Jellyfish expert Jennie Janssen, the aquarium's Manager of Changing Exhibits, took me behind the scenes recently. I highly recommend visiting this popular exhibit in person, but don't wait too long. Although a replacement exhibit is not yet scheduled, the jellies, originally slated for a three-year stint, have already been around for twice as long.

The summer afternoon when I visited, Jennie took me through the exhibit, stopping to answer questions from an excited throng of school children. In this setting, over a backlit field of blue, the jellies were stunning.

The tanks are set up to take advantage of the jellyfishes' need to swim against the current. Water flow inside the tanks is adjusted based on the size of the animals and with the aim of keeping the jellies in good viewing positions for visitors.

Although mature nettles can achieve a weak swimming motion by contracting and relaxing their bell, their location is mostly controlled by winds and currents. Except when they are in the larval and polyp stages, sea nettles are drifters.

The Atlantic sea nettle spawns in late summer through early fall at the end of its short life cycle. Males release sperm into the water. Females pump the sperm through their bodies and release tiny larvae, called planulae. The larvae float for a few days before attaching themselves to a hard surface. There the larvae grow into polyps.

When conditions are right, during the warmer months of May to August, each polyp swells into a stack of small discs and buds off as many as 45 miniature jellies smaller than the head of a pin. Baby jellies float around in smaller creeks or streams and move to bigger bodies of water as they mature.

If conditions are unfavorable, being too cold or not having enough salinity, for example, the polyps can enclose and survive harsh conditions for extended periods.

When the waters are too cold for the nettles, another jellyfish makes its way into the Bay. The lion's mane jellyfish, the world's largest jelly, can grow up to eight feet across in far northern waters. In the Bay, they grow to about four inches, the same size as our sea nettles.

Summertime cohorts of the nettle include the comb jelly and the moon jellyfish. The non-stinging comb jellies are actually a distant cousin to the jellyfish. Their walnutshaped forms reach a maximum size of about five inches and can glow (through bioluminescence) at night if disturbed.

Appearing mostly in the southern Bay, the moon jelly's clear, disk-shaped bell is fringed with hundreds of short tentacles. These true jellies can grow up to about 12 inches in diameter and temporarily shrink to one-tenth their size to conserve energy when no food is available.

Sea nettles eat zooplankton and small fish, worms, and crustaceans. Their tentacles are covered in stinging cells called nematocysts, which stun or kill prey. The nettle uses its oral arms, which hang from the center of the bell, to move food to its mouth.

When oysters are in their floating larval stage they are prone to predation by nettles and comb jellies. Although both eat larval oysters, the sea nettle spits them out unharmed. And, sea nettles help protect baby oysters by eating comb jellies during the summer months when oyster larvae are most abundant.

Because the nettle has few natural predators (sea turtles being one), their abundance is more affected by rain and heat. Since they like warmer saltier water, more nettles are likely during dry, hot summers.

In case you needed another reason to fight for clean water, getting our Bay back in balance with healthy fish and turtle populations may help control the nettle. In the meantime, I suggest avoiding swimming on windward shores, where jellies tend to traffic jam. And, if stung, apply vinegar, which keeps unfired nematocysts from stinging.

If the sting is still bothersome, remember the nettle was just drifting around the Bay eating oyster enemies. Forgiveness is a funny thing. It warms the heart and cools the sting.

Atlantic Sea Nettles at a Glance

APPEARANCE: The Atlantic sea nettle is a translucent white and can sport brown, red, or purple stripes. Up to twenty-four stinging tentacles hang from the edge of the dome-shaped bell. Ribbon-like oral arms hang from the underside and help guide food to the nettle's mouth.

SIZE: The bell of a mature Atlantic sea nettle is about the size of a softball. Tentacles can be up to six feet long.

GEOGRAPHIC RANGE: Atlantic sea nettles are found on the Atlantic and Gulf coasts from Cape Cod to Texas.