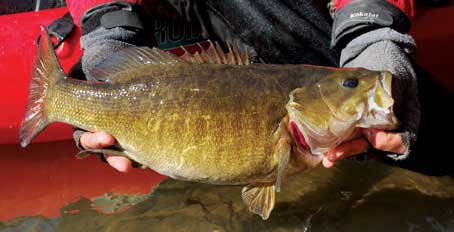 Smallmouth bass are loved by anglers because they are spectacular fighters. When hooked, these bronze freshwater fish with red eyes and stripes tend to leap high out of the water and thrash with the power of fish several times their size. Also called "bronzebacks," they favor faster-moving, rocky, cooler, upstream sections of rivers, and so are often pursued by outdoors enthusiasts in waders, kayaks, canoes, and shallow-bottomed boats.

Smallmouth bass are not native to the Chesapeake Bay region; they are originally from the Mississippi River basin and Great Lakes. (Wait a minute. If smallmouth bass aren't native why are we trying to save them? Keep reading.) During the 19th century, the fish were stocked in rivers across the U.S., often by federal and state fish commissions, because smallmouth were regarded as a desirable game species. In 1854, smallmouth bass were carried from the Ohio River in the water tank of a train and released into the Chesapeake & Ohio Canal, where they multiplied and spread into the Potomac and connecting rivers. Smallmouth were introduced to the Susquehanna River in 1869, the James River in 1871, and the Patuxent River in 1897. Today, smallmouth bass comprise a $630-million industry across the Bay watershed states.

Along with their bigger counterparts, largemouth bass—which are also non-native to the Chesapeake Bay region, smallmouth bass are considered an exotic species, not an invasive species. The latter designation means the species kills off native species and causes harmful levels of competition for resources. Exotic species, like earth worms and bumble bees, exist in harmony with native species.

Smallmouth bass do not tolerate pollution well, which makes them an indicator of water quality. Some fisheries biologists suggest that smallmouth bass may be like the "canary in the coal mine," indicating possible future health problems with other species of fish. High levels of nitrogen and phosphorus pollution, rising water temperatures, and chemical contaminants may have combined  to weaken the immune systems of smallmouth bass and make them more susceptible to naturally occuring bacteria, viruses, and parasites. Those pollutants may start in  fresh water rivers, but they continue downstream, contributing to the nitrogen, phosphorus, and contaminant problems plaguing the Chesapeake Bay.

Over the last decade, this prized freshwater sport-fish species has suffered fish kills and perplexing illnesses in several Bay tributaries. These tributary rivers include the South Branch of the Potomac River in West Virginia, the Shenandoah and Cowpasture Rivers in Virginia, the Monocacy River in Maryland, and the Susquehanna River in Pennsylvania. Problems with the fish have included lesions, blotchy skin, wart-like growths, excessive mucus covering their bodies, lethargic behavior, and abnormal sexual development in which males grow eggs in their testes.

In the 2013 CBF report “Angling for Healthier Rivers,” Dr. Vicki Blazer, research fisheries biologist with the U.S. Geological Survey (USGS), and colleagues theorized that smallmouth bass were under siege by a “perfect storm” of pollution, chemicals, and climate.

In 2020, it is still believed that rising water temperatures caused in part by climate change, nitrogen and phosphorus pollution, and endocrine-disrupting chemicals like herbicides, cosmetics, detergents, and hormones from animal and human waste are stressing the smallmouths and weakening their immune systems. (See Smallmouth Bass are Making a Comeback below.)

While more study into the causes of the fish kills and illnesses is required, one fact is clear. To restore populations of smallmouth bass, as well as the health of the Chesapeake Bay and its rivers and streams, we must reduce nitrogen and phosphorus pollution. Of the myriad of contributing factors, this is one factor that people can easily control. And addressing the problem will help sustain the economic benefits of smallmouth bass.

Cutting back nitrogen and phosphorus pollution will help reduce stress on smallmouth bass and other fish. Reducing pollution will also further efforts the Bay states—New York, Pennsylvania, Maryland, Delaware, Virginia, and West Virginia—and the District of Columbia are making to meet mandatory limits on pollution entering the Chesapeake Bay. In 2010, EPA established science-based limits for nitrogen, phosphorus, and sediment pollution and allocated reduction targets to each state. The states then developed and now are putting into effect their own Blueprints for restoring clean water sufficiently to remove the Bay from the notorious Clean Water Act 'dirty waters' list (of section 303[d] of the act). The plans must be in place by 2025. Together the limits and the states' plans are the Clean Water Blueprint for the Chesapeake and its rivers and streams.

The Bay states are making good progress already. But the story of the smallmouth bass reminds us that the job is far from done. The good news is that as we accelerate implementation of the Blueprint, we can expect healthier fishing and swimming, the creation of thousands of jobs, and a proud legacy of restoration for our children and grandchildren. Truly, we find ourselves at the moment in time for the Bay.

The Smallmouth Bass at a Glance

SCIENTIFIC NAME: Smallmouth bass  (Micropterus dolomieu), owe their name to the fact that their jaws are shorter than those of their larger cousins, the largemouth bass (Micropterus salmoides).

SIZE: Mature "smallies" are often about 12 to 20 inches long and weigh up to about eight pounds.

HABITAT: This fresh-water fish prefers locations that have gravel or rubble substrate, have some shade and cover, and have a moderate current.

SPAWNING: Smallmouth bass spawn in rocky areas of rivers during May and June. Males build nests out of sand and gravel, and females lay thousands of eggs. The male guards the nest from predators until the young fish hatch and are large enough to swim away. 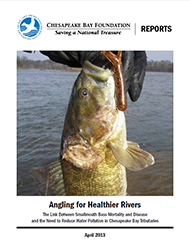 The link between smallmouth bass mortality and disease and the need to reduce water pollution in Chesapeake Bay tributaries.

Read our latest report and find out what smallmouth bass are telling us.