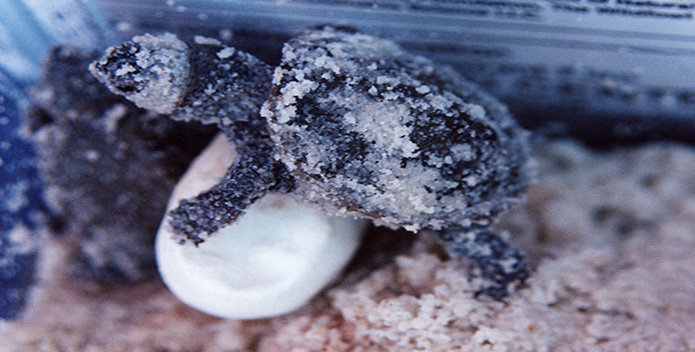 Dr. Willem Roosenburg was cruising down the Patuxent River in Maryland on a warm day last June when he saw something disturbing. Poles jutted out of the flat green water, marking a commercial fish trap called a pound net. Trapped inside were hundreds of rare diamondback terrapin, their heads poking out, their nostrils sucking air. They were alive, but clearly under stress.

"Many of them were big adult females who should have been nesting, but they were trapped and thus unable to lay their eggs," recalled Roosenburg, an expert on terrapin. "The nets were perfectly legal, because they were set up for fish. But nobody was checking these nets, and so the terrapin were caught accidentally and held there."

The incident was a vivid reminder for Roosenburg. The Ohio University biologist had successfully lobbied with several partners the year before, in 2007, to win approval of a Maryland law banning the trapping of terrapin, a dinner-plate-sized reptile with diamond-shaped bumps on its shell. Virginia and other states have long banned the catching of diamondbacks.

Terrapin populations suffered in the last decades of the twentieth century, in part because trappers were catching thousands of them for sale to China. The market for Chesapeake turtles soared as the supply of Asian turtles vanished. The trend was an eerie replay of the Victorian era in America, when a craze for terrapin soup nearly drove the species to extinction.

The new law to prohibit trapping is an attempt to stabilize the population, but the net full of terrapins Roosenburg encountered illustrated a sad truth: Banning the intentional catching of terrapin won't save the species unless more also is done to prevent their unintentional capture. Roosenburg said this accidental "bycatch" in fishing nets and crab traps can be minimized by asking, or requiring, watermen to check pound nets set in rivers where terrapin live every three or four days, and by installing turtle-blocking devices on recreational crab traps.

Scott Smith, an ecologist with the Maryland Department of Natural Resources, said a taskforce is looking into Roosenburg's concerns to see if additional regulations are needed to protect the terrapin.

Smith said that, beyond fishing, terrapin also face a major threat from the destruction of the Bay's sandy beaches. As more of the Chesapeake shoreline is bulkheaded or reinforced with boulders, fewer spots remain for the diamondbacks to form nests and lay their eggs. Waterfront development has "hardened" beaches, making it difficult for the terrapin to follow their instinctual urge to lay eggs on the shore.

Builders can help by creating living shorelines, planting marsh grasses, and leaving sandy areas for terrapins to nest. Or, better yet, Smith said, simply leave the Bay's natural shorelines alone. "Nature has done a heck of a great job of building what the terrapin needs," he said.

Another concern for the terrapin is water pollution in the Bay, particularly toxic wastes such as oil and PCBs, said Smith. PCBs ingested by terrapin remain in their bodies for a long time. Dr. Paula Henry, a zoologist with the U.S. Geological Survey, said it's important to protect the turtles because they are a good indicator of the Bay's health. "The terrapin lives on shore, on beaches, and in the water, and it has been around socially and historically as a major component of the Bay's culture," she notes. "It is the only estuarine turtle in North America," uniquely adapted to the mix of salty and fresh water in the Chesapeake. "We should care about them because they represent everything that is great about the Chesapeake Bay."

DESCRIPTION: Diamondback terrapin (Malaclemys terrapin) are turtles, about a half-foot long when mature, with a row of diamond-shaped bumps along the top of their shells. They can also be recognized by the black and white spots on their necks. Terrapin have webbed feet with claws, which they use to catch and eat mollusks, snails, small crabs, and other critters.

WHERE TO FIND THEM: Terrapin are the only turtle species in North America adapted to a brackish mixture of fresh and salt water, such as that found in the Chesapeake Bay. The turles require sandy beaches for nesting, and live in an area that extends from Cape Cod, Massachusetts, to Corpus Christi, Texas.

HISTORY: Diamondback terrapin became famous in the late 19th century as a delicacy dished up in fancy restaurants, and were nearly wiped out by a national turtle soup fad. Since 1932, the "Terp" has been the mascot of the University of Maryland.

POPULATIONS: Researchers suspect terrapin populations in the Chesapeake Bay have been falling since the 1990s, after a rebound in the mid-20th century. One of the few studies in this region was performed by Dr. Willem Roosenburg, who found a 75 percent decline in the population in the Patuxent River between 1996 and 2005.