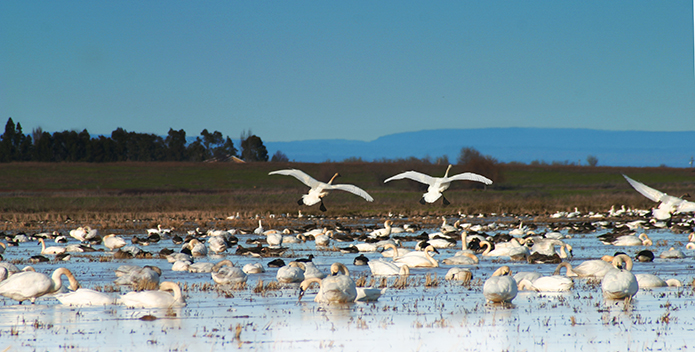 Tundra swans are wintering in the Chesapeake Bay less and less in part because of declines in underwater grasses and soft clams, which they eat.

A Fading Winter Chorus in the Chesapeake

In an ice-crusted soybean field on Maryland's Eastern Shore, under a brilliant blue sky, hundreds of large white birds are singing in a strange chorus. They are tundra swans, the largest birds native to the Chesapeake Bay region, with five-foot wing spans, dazzling white feathers, and black beaks. They nest and raise their young in the frozen wastelands of Alaska and northern Canada. Then, every winter, they fly as much as 3,000 miles south—spending almost three months in the air.

The epic journeys of tundra swans to the Chesapeake's fields and marshes are like winter vacations to a tropical getaway. In this farm field south of Cambridge, Maryland, they peck at soybeans frozen in the mud, rebuilding their strength after their flight.

Tundra swans used to be called whistling swans. But they don't really whistle—just as their better-known cousins, mute swans, are not really mute. Mute swans, the fairy-tale-looking swans with orange knobby bills and curved necks, are from Europe. They are an invasive species here, unwanted by wildlife managers and many other people, because mute swans rip up underwater grasses and aggressively drive away native species, such as least terns and black skimmers.

By contrast, the more slender and straight-necked tundra swans are the old aristocracy here in the Chesapeake region, too refined to grunt, hiss, or brawl. Tundra swans entertain each other by forming clarinet ensembles—choruses of reedy, piping voices.

"Their call is an incredible sound, and you should not take it for granted," said Larry Hindman, Waterfowl Program Manager for the Maryland Department of Natural Resources. "For some people, to see and listen to these birds, it is a once-in-a-life-time experience."

As he speaks, the tundra swans in this field take flight. Their wing strokes are knifelike, graceful and powerful, as they soar up and over the row of trees edging the field. Their fantastically white feathers flash in dazzling contrast to the brown woods, iron fields, and dead grasses.

Hindman's job is to watch the arrival of tundra swans every winter and estimate their numbers. Over 35 years of spying on their flocks from low-flying airplanes, Hindman knows tundra swans are a less frequent sight here.

While numbers of tundra swans appear to be healthy across the continent, fewer and fewer are wintering in the Chesapeake Bay. This may be in part because the underwater grasses and soft clams they normally eat are being killed by pollution and other problems, Hindman said. As a result, more swans are feeding in farm fields. Others are skipping the Chesapeake region altogether and flying farther south.

Meanwhile, the total number of tundra swans in Eastern North America grew by 43 percent over this time period. Additionally, the number wintering in North Carolina more than tripled, from an average of 20,700 from 1971 to 1975 to 68,600 from 2006 to 2010, according to survey data. Clearly, the birds are finding the Chesapeake less desirable, Hindman said.

"The real threat to tundra swan habitat in the Chesapeake Bay region is too many people and urbanization, and what they do to the quality of the water," Hindman said. "You've got to have good water quality to produce submerged aquatic vegetation, and of course that is one of the problems with the grasses in the Chesapeake Bay. We have too many pollutants and high levels of nutrients that are damaging to the Bay grasses."

At its most pristine, the Chesapeake Bay supported more than 600,000 acres of submerged aquatic vegetation, according to the Virginia Institute of Marine Science. These grasses not only provide food for birds and habitat for blue crabs and many other aquatic species, but also help filter and clean the water. Water pollution and sedimentation in the Bay caused a major decline in these underwater grasses starting in the 1950s, with a major blow to grasses dealt by runoff flushed into the Bay by Hurricane Agnes in 1972. Since then, there have been rebounds of the grasses in some areas, including the northern Bay around the Susquehanna Flats. But overall, by 2011, the amount of aquatic vegetation in the Bay remained at less than 10 percent of historic levels, with only 57,964 acres of grasses, according to the Virginia Institute of Marine Science.

"That could be the most logical explanation," for the decline in the number of tundra swans wintering in the Bay, said Robert J. Orth, Professor of Marine Science and expert on aquatic vegetation at Virginia Institute of Marine Science. "The amount of food has gone down, and that has probably had a ripple effect through the ecosystem."

Compounding the problem is the fact that another food of the tundra swans, softshell clams, has suffered a near disappearance from the Chesapeake Bay. Softshell clams were once as common as grass on the Bay bottom. But commercial harvests of softshell clams with machines called hydraulic escalator dredges began in the 1950s. Harvests plummeted from an average of 500,000 bushels a year from 1956 to 1971, to 2,665 bushels in 2010, according to the Maryland Department of Natural Resources. The cause for the decline remains unclear, but could include a protozoan parasite, a viral disease, and perhaps overharvesting.

"Softshell clams have been characterized by some as a keystone species in the Bay," said Chris Dungan, Manager of Shellfish Health at the state agency. "But they were much more of a keystone in the 1950s than today. Today there are not as many left."

Remove keystones, and the building falls.

The migration of the tundra swans is one of the most distinctive and beautiful phenomena to grace the Chesapeake's winters. But unless we do more to restore the Bay's ecosystem, the songs of these arctic angels may become just a memory.

Habitat Degradation   About the Bay

Tundra Swans at a Glance

DIET: Tundra swans feed in shallow waters on small shellfish and Bay grasses. Increasingly, they are relying on grains left on farmland over the winter

INTERESTING FACT: Tundra swans sleep while floating and they are thought to mate for life.