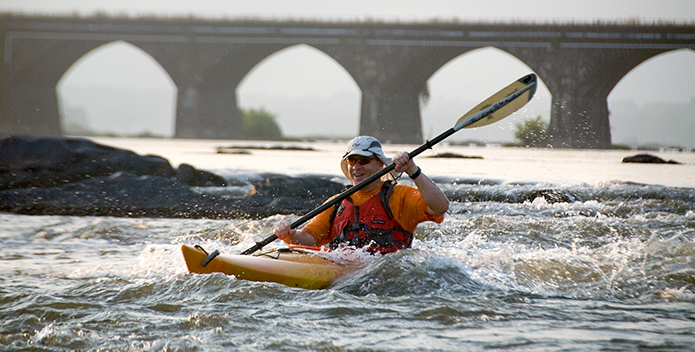 A kayaker enjoys the Susquehanna River near Harrisburg.

The Chesapeake Bay is essentially the Susquehanna River's valley floor. It is the tidal portion of the Susquehanna. The river and the Bay are two integral parts of one ecosystem.

Before There Was A Chesapeake Bay

Twenty thousand years ago, during the last Ice Age, sea level was about 330 ft. lower than it is today. At that time, the Susquehanna flowed from the edge of the polar ice cap (in what is now north central Pennsylvania) down to the Atlantic. All of the rivers in what is now the Chesapeake drainage basin flowed into it.

As the earth warmed up and sea level rose, the Atlantic backed up into the Susquehanna's valley floor, forming the Chesapeake Bay and the tidal portions of rivers like the Potomac and the Nanticoke.

The Susquehanna's large drainage basin, or watershed, means the pollution that flows into Pennsylvania rivers and streams ultimately finds its way to the Chesapeake Bay.

The Mighty Susquehanna Is Ailing

Many of Pennsylvania's waterways suffer from an overload of pollution from many different sources, including agriculture and stormwater. A water quality report issued by the Pennsylvania Department of Environmental Protection (DEP) in 2020 found that as many as 25,468 miles—30 percent—of Pennsylvania's 85,000 miles of rivers and streams are impaired for various uses.

One intervention that could be instrumental in improving the river's health is its inclusion in the Environmental Protection Agency's 303(d) Impaired Waters List. This list includes rivers and streams across the country that are significantly impaired and designates them for additional study and superior restoration investments and ensures that each of these waterways will have a recovery plan.

CBF petitioned Pennsylvania's governors and Department of Environmental Protection (DEP) to include the Lower Susquehanna in its 303(d) recommendations for several years. The2018 report included a 46-mile segment of the river to be impaired for aquatic life.

The Susquehanna River is the source of drinking water for millions of Pennsylvanians and is an economic engine for tourism and recreation. Though the river's health is making progress under Pennsylvania's Clean Water Blueprint, agricultural runoff, acid mine drainage, and polluted urban runoff continue to contaminate the Susquehanna, its tributaries, and the Chesapeake Bay.