Walking the Watershed from around the World 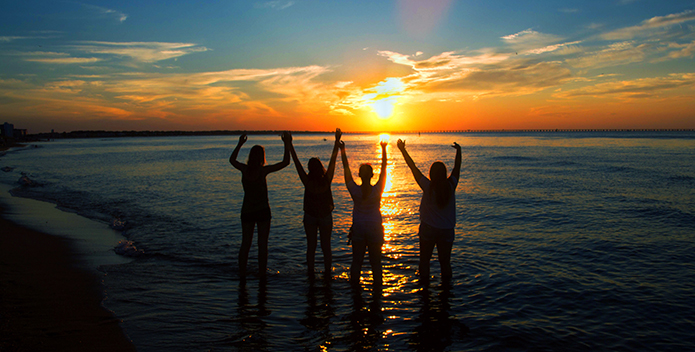 Friends enjoy a Virginia sunset on the Bay.

In the middle of a global pandemic, 745 CBF staff, friends, and supporters from around the world turned to nature to nurture their physical and emotional wellbeing and help save the Bay.

When CBF’s signature summer event and largest fundraiser, Bands in the Sand, had to be canceled, CBF staff pivoted toward another initiative that would not only raise critical Bay-saving funds but also connect and support the CBF community during an unprecedented and challenging time.

Walk the Watershed, CBF’s first ever peer-to-peer fundraiser, challenged participants to build a virtual team and commit to walking a combined 200 miles—the approximate length of the Chesapeake Bay. More than simply a fundraiser, it was a regional public health initiative designed to unite our socially distant community and get people outside and connected with the restorative powers of nature. By partnering with generous and environmentally responsible companies like Hannon Armstrong, participants’ efforts were amplified to make an even more meaningful impact on the Bay.

We quickly learned that our supporters are something special. What began as a regional effort quickly reached across the globe—engaging participants as far away as Japan, Australia, and India.

Three years ago, Narendra Jindal visited his good friend Emmanuel D’Silva in Chevy Chase, Maryland. Among many of the sights around the U.S., it was the beauty of the Chesapeake Bay that stuck with Narendra.

When Emmanuel registered a to participate in Walk the Watershed, Narendra was among the many friends Emmanuel invited to join his team. Because Narendra’s city in Central India remained on lockdown, Narendra walked in the basement of his house. Despite frequent breaks due to sciatic nerve pain, Narendra averaged three miles a day and was “delighted to contribute in cash and miles to help preserve the Bay.

In Maryland, students and staff at Baltimore Lab School also committed to walking the watershed. The school’s Outdoor Education Coordinator, Patti Child, incorporated the challenge into their virtual learning as a way to demonstrate the power they hold “together” while remaining safe and separate.

The school and its community collectively walked an impressive 5,361 miles, sharing stories and photos along the way. One student kept track of a small family of Canada geese that included one baby. Over the weeks, she watched the gosling grow and eventually swim in her neighborhood pond while its parents watched carefully from the water’s edge.

Along with the public, CBF staff enthusiastically embraced the effort. They got outdoors and raised $15,000 in support. “A lot of us are already runners, hikers, walkers, etc., and during this pandemic these outdoor activities have really served us all well for our mental, physical, and emotional wellbeing. And now, adding a bit of the friendly competition between colleagues has made these activities even more fun,” said a CBF staff member.

For many, walking the watershed served as a daily reminder that you can find solace and beauty in nature found just outside your front door. We are grateful to our worldwide community for their participation and support of our mission to implement the Chesapeake Clean Water Blueprint and save the Bay.

The Walk the Watershed Challenge ended on June 30, 2020, but you can still raise funds for the cause by setting up a BayRaiser for free in as little as five minutes.