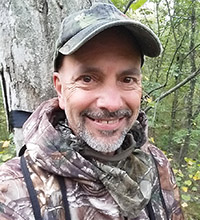 B.J. Small is a native Pennsylvanian who enjoys hunting, fishing, canoeing, and the myriad of other outdoor pleasures the Commonwealth has to offer.

He is CBF's Media and Communications Coordinator in Pennsylvania, working with editors and producers throughout the Keystone State to deliver CBF's clean water messages across many platforms.

He was appointed by Governor Tom Wolf to serve on the board of the Pennsylvania Fish & Boat Commission. He currently writes weekly outdoors columns for two newspapers and is a former newspaper editor and broadcaster.

His favorite Bay spot is the place that serves his next oyster or blue crab.