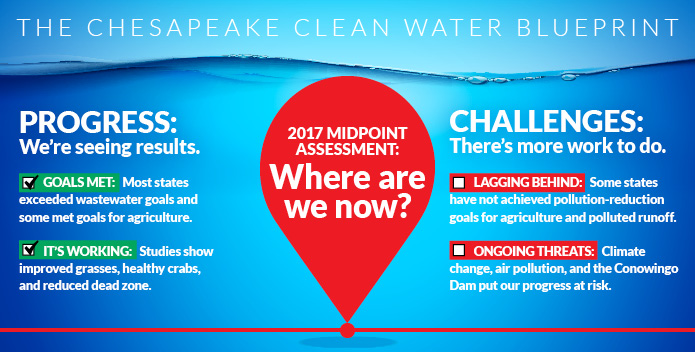 At the end of the first half of the 15-year Clean Water Blueprint process, it’s clear that Maryland and Virginia are carrying the team—mostly by tackling wastewater. As the clock counts down to 2025, we know the second half is going to be tougher. We will not see a restored Chesapeake Bay unless all three states and their federal partners expand their playbooks and push harder. See where things stand, below, and then take a look at some of the current and future challenges we face and what we need to do to overcome them.

ABOUT THE MIDPOINT GOALS

In December 2010, EPA in collaboration with the six Bay states and the District of Columbia established the Chesapeake Clean Water Blueprint—the science-based limits for nitrogen, phosphorus, and sediment needed to restore the Chesapeake Bay and its rivers and the state-specific clean-up plans to achieve those limits.

The Bay jurisdictions agreed to fully implement their plans by 2025. In addition, each committed to a midpoint assessment of progress in 2017. At this midpoint, practices should be in place to achieve 60 percent of the necessary pollution reductions. See the chart below for an evaluation of how well jurisdictions met their midpoint goals.

In early 2018, EPA released the data needed to determine whether the 2017 midpoint-assessment goal was met. Specifically, the agency released modeled estimates of the pollution reductions resulting from practices that were implemented in all the Bay jurisdictions between 2009 and 2017.

Watershed wide, the states missed the nitrogen pollution-reduction goal, achieving only 40 percent of the needed reductions. The biggest shortfall is in Pennsylvania, but in all jurisdictions, reducing polluted runoff from urban and suburban areas is also off-track.

On the positive side, the data indicate that the practices in place have helped achieve pollution-reduction goals for phosphorus and sediment. More importantly, there is scientific consensus that our pollution-reduction efforts are working. Underwater grasses continue to thrive, with acreage in 2017 setting yet another record. In addition, dead zones are shrinking, the oyster population is rebounding, and in places water clarity is better than it has been in a long time.

CBF evaluated progress toward 2017 midpoint goals. First, we looked at state-specific estimates of pollution-reduction progress. This assessment, however, only tells part of the story. We also wanted to understand which policies and programs added to this progress or contributed to any shortfalls. To that end, we evaluated whether the jurisdictions implemented key policies, programs, and funding committed to in their clean-up plans. These actions have a direct effect on the success or failure of achieving the pollution-reduction goals from wastewater, agriculture, and urban and suburban stormwater.

Pollution-reduction progress is assessed with modeled estimates of the pollution-reduction benefits from implemented practices such as upgrades to wastewater treatment plants, best management practices like cover crops and streamside forested buffers on agricultural lands, and stormwater practices in urban areas like rain gardens. Progress in each sector for the three pollutants is compared to the 60 percent by 2017 goal. 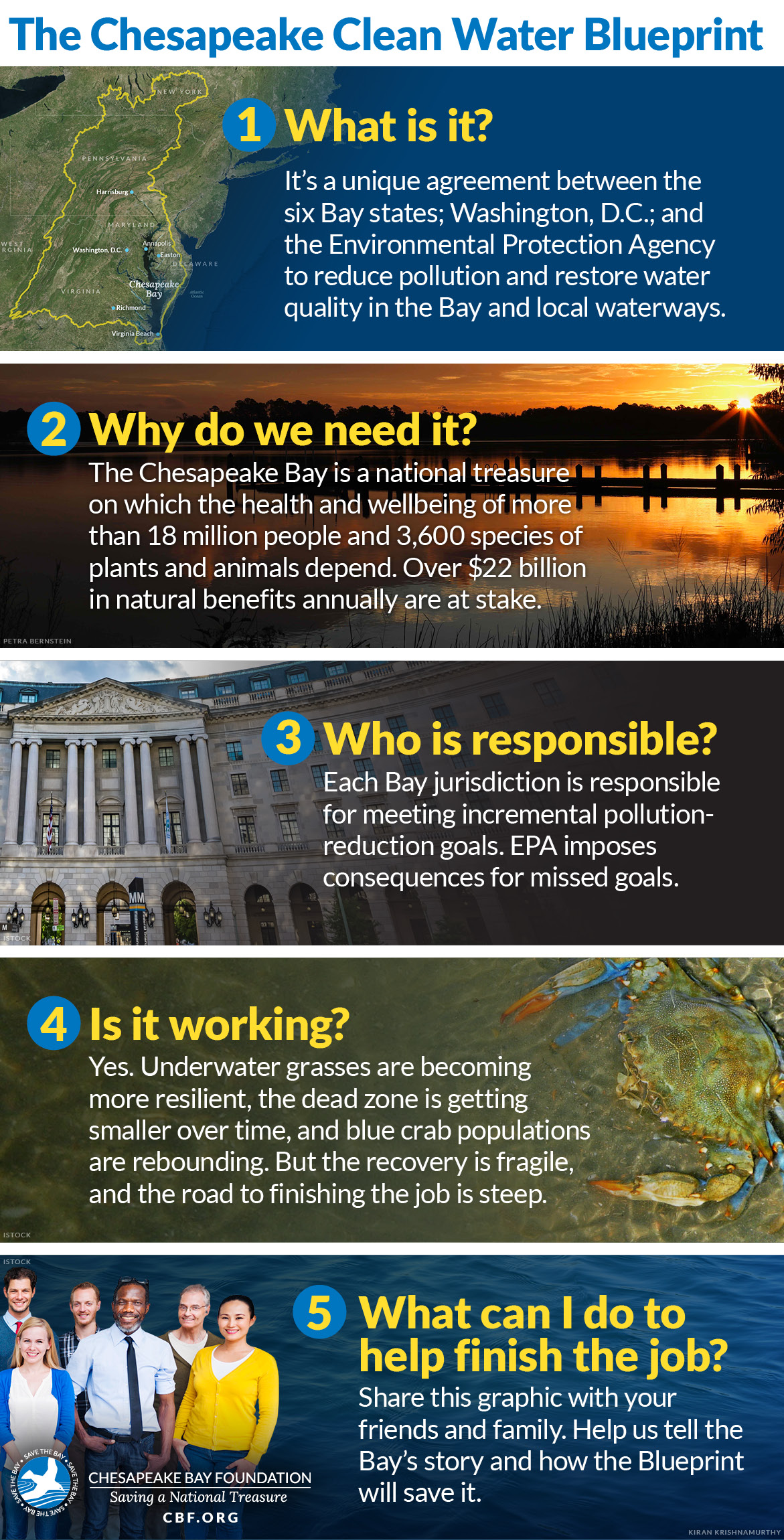