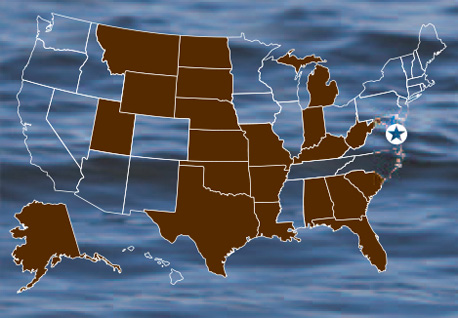 On February 29, 2016, the U.S. Supreme Court denied the request of the American Farm Bureau Federation and its allies to take up their case challenging the legality of the Chesapeake Clean Water Blueprint. That decision means that the ruling of the Third Circuit Court of Appeals will stand. That unanimous ruling found that EPA did not exceed its authority and that the efforts to restore local rivers, streams, and the Chesapeake Bay are entirely legal. See Supreme Court Allows Chesapeake Bay Blueprint to Stand

In February of 2014, the American Farm Bureau Federation and Fertilizer Institute recruited 21 states from across the country to support their efforts to derail Chesapeake Bay restoration. Together, they're seeking to overturn the recent ruling which declared the science-based pollution limits and the cleanup plan legal.

At issue is the Total Maximum Daily Load (TMDL or pollution limits), developed by EPA and the Bay states, which sets the maximum nitrogen, phosphorus, and sediment pollution that the water bodies can withstand and remain healthy. Taken together, those limits and the individual state plans designed to achieve the pollution reduction goals create the Chesapeake Clean Water Blueprint.

Opponents of the Blueprint contend that EPA has usurped the states' authority over land use and development. Those supporting the Blueprint point out that the states and EPA cooperated to develop the pollution limits and that each state developed its own implementation plan. These are exactly the actions called for under the Clean Water Act.

The Chesapeake Bay states have worked with the federal government to develop a Blueprint for clean water in local rivers, streams, and the Chesapeake Bay. And it is working. Hard-working farmers, businesses, and individuals are working together to make our rivers and streams safer, improve habitat, protect human health, and strengthen local economies.

According to their amicus brief, these 21 states are concerned that if the Blueprint works here, other watersheds—like the Mississippi River Basin—"could be next." And they have every reason to be concerned. A review of the EPA's National Water Quality Assessment Report indicates these states face their own serious water quality issues.

Read more on the legal challenges to the Blueprint

Get the facts about the Bay Blueprint.