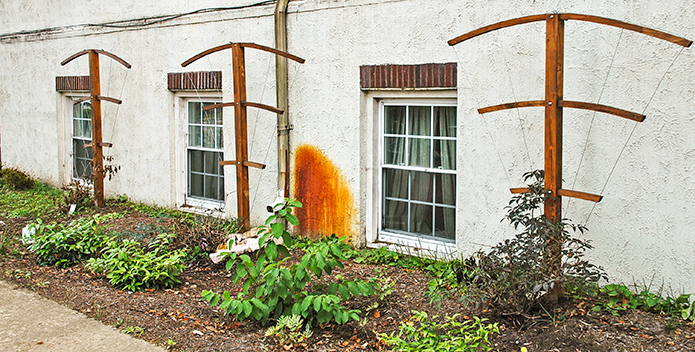 Rain gardens like this one will soon be popping up around the Broad Rock neighborhood of Richmond.

New projects in Southside Richmond—On September 2, 2020, The National Fish and Wildlife Foundation announced a $227,467 grant to the Chesapeake Bay Foundation (CBF) and local partners for the two-year Greening Southside Richmond Project. Work will be carried out in neighborhoods suffering from extreme heat linked to racially-motivated housing discrimination in the past. This project will plant hundreds of trees, train local youth for green jobs, transform asphalt into green space at Branch’s Baptist Church, and cool some of the hottest neighborhoods in Richmond. READ MORE

The Broad Rock neighborhood contains portions of three watersheds—Broad Rock Creek, Goodes Creek, and Grindall Creek—all of which drain into the James River and, ultimately, the Chesapeake Bay. According to the Stormwater Master Plan commissioned by the City of Richmond, these waterways are polluted with fecal coliform bacteria, sediment, and nutrients. The City, as well as all of the localities within the Chesapeake Bay watershed, are currently charged with meeting specific cleanup goals for local waterways that feed into the Bay. CBF's project is assisting with this endeavor, and by helping to clean up these small watersheds, we will ultimately help in cleaning up the Bay.

The Broad Rock neighborhood is older, urban, and under-served, with many aging commercial corridors that were constructed prior to requirements for environmental impact management, resulting in large expanses of pavement. Pollution due to decades of commercial use and economic disinvestment has reduced the environmental and aesthetic benefits local waterways could provide for residents. CBF's activities helped increase the amount of green infrastructure, which lets rain soak in where it lands. In addition to addressing water quality needs, CBF's project can inspire urban residents to be more engaged as environmental stewards. By re-greening the neighborhood strategically, the project improves water quality and habitat for fish and wildlife while also linking people to trails and parks that reduce their stress and help them become healthier.

CBF engaged the Broad Rock community in a wide range of activities. We hosted neighborhood walks, where community residents joined us to explore their local waterways. Walks were held along Broad Rock Creek behind Bellmeade-Oak Grove Elementary School, where adults and students heard about pollution, especially pet waste, and ran a seine net through the creek to identify critters in this urban waterway. Another Watershed Walk was an exploration of the Richmond Slave Trail along the James River led by Ralph White, former superintendent of the James River Park System.

CBF also hosted our Volunteers as Chesapeake Stewards, or VoiCeS, adult education class in the Broad Rock neighborhood. During the VoiCeS classes participants were provided with a historical, environmental, and scientific basis for understanding local waterways, such as Broad Rock Creek and the James River, and the Bay. VoiCeS graduates must complete a minimum of 40 hours of volunteer service on a Bay-related project to earn CBF's designation as a "Chesapeake Steward."

CBF staff hosted a group of students aboard our educational vessel, Baywatcher. Twenty-three seventh-grade students from Boushall Middle School joined CBF's education staff as we explored portions of the James River in Richmond and saw first-hand the impacts of land use on water quality. Community leaders also had a chance to get outside aboard the Baywatcher to learn more about ways to prevent polluted runoff in urban communities.

CBF also helped foster a community coalition to vet project ideas, be part of project implementation, and carry forward the project's work. To do this, the project has paid for community citizens to participate in Non-Profit Point Leadership training leadership skills.

In summer 2014, CBF sent a postcard mailer to thousands of homeowners and businesses in the Broad Rock community, informing them about the availability of funds to install small rain gardens on residential properties. CBF met with the many homeowners who responded to the mailing, discussing stormwater issues, including the need to limit impervious surfaces in order to reduce runoff loads. As a result of these visits, CBF educated many individuals about green infrastructure projects and selected five property owners to have rain gardens constructed on their properties.

In addition to these smaller green infrastructure projects, CBF worked with Civil and Environmental Services, LLC to install one large-scale project at Second Baptist Church of South Richmond. The church owns a seven-acre property of which 5.8 acres are impervious, or hardened, surfaces. The church's enormous roof and paved parking lot came with a price tag—the church was paying an $8,000-per-year stormwater utility fee to the City of Richmond based on the amount of impervious surface on their property. As CBF got to know Pastor Hodge and the congregation of Second Baptist, they explained the church was located in a "food desert." Southside Richmond displays higher rates of diabetes, obesity, and hypertension than other parts of the city. Pastor Hodge wanted to provide fresh fruits and vegetables for his congregants while also making the congregation be better stewards of the environment.

To accomplish the church's goals and achieve the grant deliverables, CBF proposed a three-part solution:

The project succeeded in enhancing the site in multiple ways:

When the project was complete, Virginia First Lady Dorothy McAuliffe attended a community ceremony and spoke about the need for more projects such as the one at Second Baptist Church.

In summer 2016, Second Baptist harvested peppers, tomatoes, snow peas, radishes, eggplant, squash, okra, basil, and many other vegetables which were sold at a low cost to the congregation on Sunday mornings. The vegetables have been grown organically, so congregants don't need to worry about pesticides in their food. The church has also hosted cooking classes to teach congregants how to prepare vegetables with which they might not have been familiar. They even hold an occasional farm stand, where they sell their food to the general public. The congregation also use their community garden as a teaching tool for others, partnering with Virginia State University and Virginia Cooperative Extension to offer a series of gardening workshops called Feeding the Mind, Body, and Spirit. Second Baptist Church is very happy with their garden; and CBF is thrilled it was able to implement the community's vision and to demonstrate how water quality improvements have far-reaching social, economic, and cultural benefits.

CBF is thankful to the National Fish and Wildlife Foundation, The Community Foundation Serving Richmond and Central Virginia, RBC Blue Water Project, and REI Outfitters for funding the Restoring Southside Richmond Watersheds project. We are also appreciative of our partners who are helping CBF meet the project deliverables, including Civil and Environmental Services, LLC, Green Infrastructure Center, and the City of Richmond.