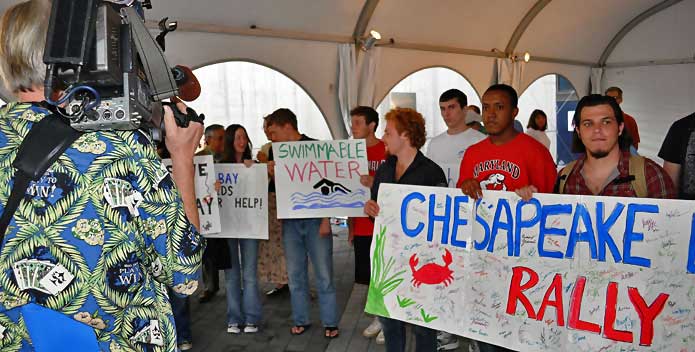 Bay advocates join CBF at a rally in Annapolis.

The Chesapeake Bay Foundation and its members, now more than 300,000 strong, are the strongest and most effective voice that exists for protecting and restoring the Bay and its rivers and streams. We work at local, state, and federal levels for effective laws and regulations that will reduce pollution, restore vital natural systems like oyster reefs, forests, and wetlands, and encourage smart growth in our communities.

CBF acts as a watchdog to elevate good practices for healing our waterways, while being vigilant in opposing projects or proposals that would degrade water quality. Our scientists submit comments to governing bodies regarding fisheries management, wetlands mitigation, stormwater issues, construction and development projects and more. CBF is a well-respected resource on environmental issues that impact the Chesapeake Bay, its rivers, and streams.

There is no greater advocate in Maryland for the Chesapeake Bay than the Chesapeake Bay Foundation. We are fortunate to have their strong voice leading the fight for a healthier Bay and its tributaries. For over 50 years, their efforts to engage and educate Marylanders on the actions they can take to save the Bay has worked to protect the Bay's natural resources, safeguard its wildlife, and ensure clean water for our communities and future generations.

One of CBF's top priorities is to defend and implement the Chesapeake Clean Water Blueprint. Much of this work is unfolding in Washington, D.C., where CBF and our allies worked hard to stop legislation that would have dramatically set back efforts to restore the Chesapeake Bay. Just as important, however, are the local communities struggling to implement their states' plans in innovative and cost-effective ways. CBF's advocacy efforts are designed to help and to hold the states and the federal government accountable for staying on the course of restoration.