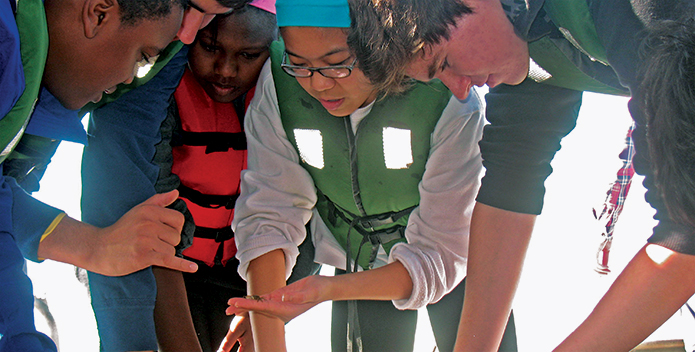 Born in Washington, D.C., and raised in Prince George's County, Devan is exactly the kind of high schooler CBF's student leadership program was designed to reach: leaders who have yet to discover their connection to this national treasure.

We are the future, and we will inherit the legacy from any decisions you make about the Bay today.

"It was mind blowing," said Devan Ogburn remembering the first time she saw the Chesapeake Bay. "I guess you could say I was somewhat of a city person. I didn't really have any experience with the Bay."

Born in Washington, D.C., and raised in Prince George's County, Devan is exactly the kind of high schooler CBF's student leadership program was designed to reach: leaders who have yet to discover their connection to this national treasure.

In 2012, when Devan was President of the Maryland Association of Student Councils (MASC), she attended a weekend retreat at CBF's Karen Noonan Center on Maryland's Eastern Shore. Between sessions spent on MASC business, the students learned about Chesapeake Bay ecology, scraping for crabs, trawling for fish, and exploring the tidal marsh. "It really opened my eyes," she said, "to learn something new about a different part of an area I had been in all my life but never really gotten to see." The retreat inspired her to take an environmental science class. To hear Devan tell it, things just fell into place after that.

Her enthusiasm for protecting the Bay grew as did her involvement with CBF. In the spring of 2014 she became the President of CBF's Student Bay Advisory Council, the only forum of its kind in which high school students from all the Bay states can come together to discuss regional issues and share Blueprint-associated project ideas. The council meets regularly at CBF's headquarters where students either participate in person or through videoconference. The council recently endorsed the movement to create an Environmental Literacy requirement for Virginia high schools.

In June 2014, Devan and three alumni of CBF's education programs spoke before the Chesapeake Bay Executive Council, which includes Bay state governors, Washington, D.C.'s mayor, the Chair of the Chesapeake Bay Commission, and the EPA Administrator. Representing their peers in Maryland, Virginia, Pennsylvania, and the District of Columbia, the students urged their elected officials to consider the legacy they leave behind and support efforts to improve water quality in the Bay. "It was a little nerve wracking at first," Devan said. "But it was exciting being able to sit in front of our own governors. And once we started speaking, their attentiveness put us more at ease."

When asked if she sees herself in a leadership role as an adult, her voice rings with passion, "I do. I really do. I realize how important my view actually is, and that gives me more drive to speak out on these issues. I think because we're able to start so young, we have an even stronger connection to what we're working towards. And I think that once we get into our adult years, that bond is something that we'll never lose."

"I'm really thankful to CBF for educating me about my surroundings. I now understand how everything is really connected to the Bay, and why it's important for me to not only speak out on these issues but to work just as hard on actually trying to save the Bay and protect our environment."

What’s Up in Education