About Anglers for Clean Water 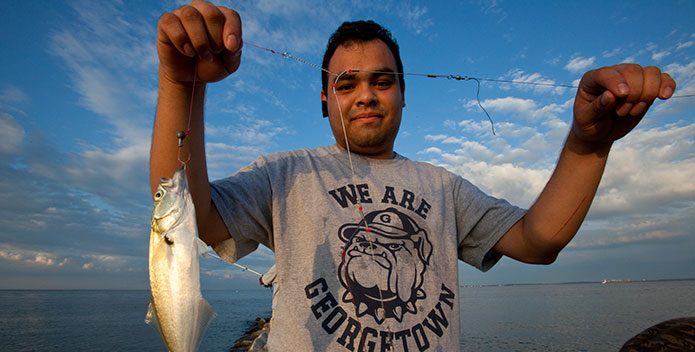 Chesapeake fish need clean water and a healthy habitat. Restoring and sustaining the Chesapeake region's fish stocks are as much about improving water quality and fish habitat as they are about fishery management. But there is all too often a disconnect between the Bay's angling and environmental communities, and sometimes they even work at cross-purposes. Could they join forces? We believe they can.

A Project from the Chesapeake Bay Foundation's Fisheries Program

"If sportsmen and environmentalists worked together, they would be invincible" ~Ted Williams

"Whenever sportsmen combine with environmentalists, you have 60 to 70 percent of the population, an absolutely irresistible coalition," said noted hook-and-bullet outdoor writer Ted Williams. In the Chesapeake, there is definite interest in building that natural partnership.

How Anglers for Clean Water Works

CBF's Anglers for Clean Water (ACW) program aims to grow and strengthen that partnership by reaching out each month to established angling clubs across the Chesapeake Bay watershed to inspire, educate, equip, and mobilize them to be advocates for clean water. CBF's ACW team members—Bill Goldsborough, Chris Moore, and John Page Williams—are all hard-core anglers. Each month they will assemble a package of three-to-four stories about fish habitat and clean water that clubs can share with their members and post on their websites.

Some of the stories will be good news, others not so nice. Either way, the stories will shoot straight about the science, and in many cases, they'll offer Bay-area anglers opportunities to get involved in hands-on projects such as oyster reef restoration and stream buffer planting. From time to time, we'll also ask them to weigh in on specific issues like addressing polluted runoff from urban and suburban areas. Sometimes, the stories will offer tips that can help improve club members' fishing experiences. After all, the more anglers learn about how the Chesapeake and its tributaries "work," the more they will grow in understanding the behavior of the fish they seek through the seasons.

Things never happen as fast as we would like, especially reversing a century-long decline in a large ecosystem like the Chesapeake's. We've been at this Bay-cleanup business for over thirty years. During that time, the human population in the Chesapeake watershed has grown from twelve to eighteen million. Want to guess how that growth has affected livestock numbers, or acres of forests and fields cleared for pavement, concrete, and rooftops, or cars on the roads?

But we have the best ecosystem science on Earth telling us where we are now and what more we need to accomplish. The news is good: we're halfway there, and the Clean Water Blueprint is designed with two-year milestones to make sure we get there by 2025. Now imagine how much good might come if anglers and environmentalists joined forces to advance the Chesapeake Clean Water Blueprint and the improved fish habitat that will come from it.

Want to learn more and join in?
Well, here we go…

Oh, and if your organization isn't already part of Anglers for Clean Water, sign up today!

Four Ways You Can Help

Helping to restore the Bay's health doesn't require us to be scientists but instead, active citizens. Restoring habitat such as oyster reefs and reducing pollution in the water around them are absolutely essential to healthy stocks of fish and crabs. Here are four ways anglers can respond actively to those challenges: