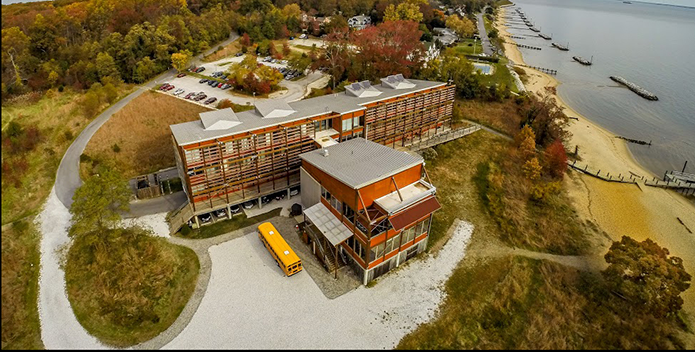 After a heavy rain, you won't find a puddle much larger than three feet or deeper than an inch at CBF's Philip Merrill Environmental Center. That's because the building is surrounded by a "great green filter" of switchgrass, rushes, and native trees, as well as three vegetated bio-retention areas, a large wet meadow, and pervious gravel.

2015 has brought us multiple deluges, beginning with June's record precipitation, which eclipsed even that from Superstorm Agnes in 1972. Photos from Norfolk to Annapolis show streets closed and cars parked with water halfway up their tires. Here in Anne Arundel County, the Maryland Department of the Environment and the county Health Department strongly advise people to have no direct body contact with the water around here for at least 48 hours.

Last summer, CBF's Maryland Office Media Coordinator, Tom Zolper, led a program with three counties and their local colleges to investigate pollution from fecal bacteria in public waterways after rainstorms. The testing sites in Frederick, Harford, and Howard counties included several popular swimming areas. Many of the results are alarming.

This kind of pollution threatens not just swimmers but the legs of anglers wade-fishing and even boaters whose hands get wet handling bait and fish. Yes, these are Maryland examples, but Virginia has plenty of places with similar concerns, from the Pony Pasture in the fall line of the James at Richmond to the Lynnhaven River in Virginia Beach.

Are these the waterway conditions we must accept as normal today? Are they what we want to pass on to our children and grandchildren? Of course not. Bacterial pollution from storms goes hand-in-hand with the rain-driven flow of nitrogen, phosphorus, and sediment that damages water quality and fish health all over the Chesapeake. The good news, though, is that the Chesapeake Clean Water Blueprint offers local solutions that we can support and take part in.

After this week's heavy downpours at CBF's Philip Merrill Center, it's hard to find a puddle much wider than three feet, or deeper than an inch, even though all of that rain fell onto a 32,000-square-foot-building and a parking lot where about ninety staff members park each day.

From the early 1930s until the late 1990s, CBF's campus here was the site of the Bay Ridge Inn, and the Merrill Center sits on the site of the former Inn's Olympic-sized swimming pool, with a gravel parking lot beside it. The Merrill Center's design team carefully laid out the site to have it behave exactly this way, with roof and parking lot plumbed to three vegetated bio-retention areas and then to a large wet meadow that had been drained in the 1930s for the Inn's softball field. We have allowed it to revert to a "great green filter" of switchgrass, rushes, and native trees. Yes, we had the opportunity to completely re-engineer this site when we began planning for the Center in 1998, but so does anyone re-developing a "brownfield" site. In fact, many jurisdictions require such environmental site design for commercial re-development today.

The opportunities to correct local stormwater runoff issues are out there. A great example of such a project is highlighted in a two-part blog post by Julia Poust, CBF's 2015 Chesapeake Conservation Corps volunteer. Her home church, Christ Our King Presbyterian in Bel Air, Maryland (Harford County, north of Baltimore) had developed chronic flooding problems due to its own growth and the continuing suburban development around it. With help from members of the church, Master Gardeners, and Doug Myers, Senior Scientist in CBF's Maryland Office, Julia designed and led a "do-over" of the land. The before-and-after photos of the project help her words tell the story.

Julia's project is, fortunately, no longer unique. We see a growing number of similar improvements all over Virginia, Maryland, and even central Pennsylvania. Do they apply to us as anglers? You bet! Know a place with problems like Julia's church that drains to a favorite tributary? Let us know. We might be able to help connect you to a solution.