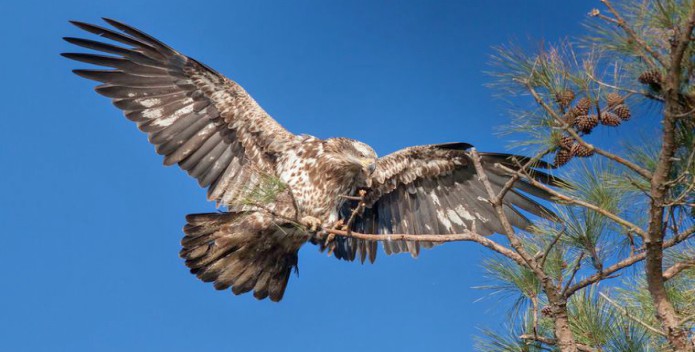 A young bald eagle on the Western Branch of the Elizabeth River, Portsmouth, Virginia.

A young Bald Eagle comes in for a delicate landing on a branch that seems too flimsy to hold him . . . but did! Taken in late February on the Western Branch of the Elizabeth River, Portsmouth, Virginia.

We moved to the edge of the Elizabeth River in the fall of 1970 when seeing an eagle in the whole of the Mid-Atlantic region was a very rare and exciting treat. [With DDT] the population was at its low point. It wasn't until the 1980s, far up the York and James Rivers, that I saw my very first eagle in the wild. It wasn't until the mid 1990s before I spotted one anywhere on the Elizabeth River.

What an exciting change there has been because now we look forward to every winter, as several eagles of varying ages come to visit the Elizabeth. The eagle and osprey define the character of the Bay for me as much as the oyster and blue crab.

Ensure that Bill and future generations continue to enjoy extraordinary sights and places like these along the Chesapeake. Support the Chesapeake Clean Water Blueprint—the plan to Save the Bay and its waters!