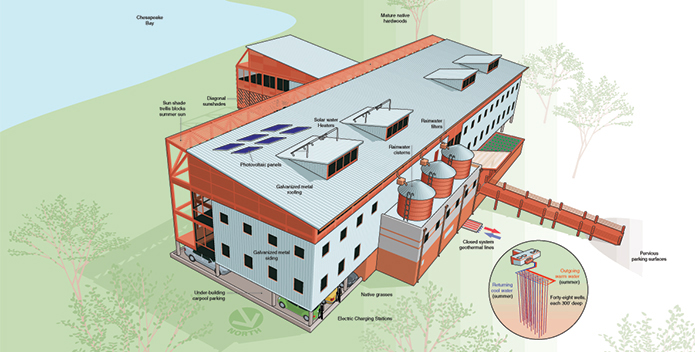 Engaging, Informing, and Inspiring Generations to be Environmentally Responsible

The Chesapeake Bay defines the Philip Merrill Environmental Center and not just in the stunning view that fills the 32,000-square-foot building's entire southern wall of windows. The Center embodies the Chesapeake Bay Foundation's dedication to a clean, healthy Bay and to resource restoration and protection and environmental advocacy and education. More than a decade after its construction the Center remains a destination for those who want to learn how to build "green."

After purchasing the property in 1997, CBF saw construction of its new headquarters as an educational opportunity, a chance to "walk the talk" and set an example for environmentally responsible building. At the same time, the U.S. Green Building Council was starting its program to encourage more people to be environmentally responsible and build more sustainably. They started a program called "Leadership in Energy and Environmental Design," better known as LEED. The LEED rating system is designed to promote design and construction practices that increase profitability while reducing the negative environmental impacts of buildings and improving occupant health and well-being.

When the Merrill Center opened its doors in 2001 it became the first LEED Platinum building in the world and a model for the newly emerging green architecture and green building industries. It has won international acclaim as an interactive model that educates and inspires people—including hundreds of businesses, organizations, and government agencies—and remains one of the world's most energy-efficient buildings. Today, many energy reduction and environmental construction practices pioneered by the Center have become, if not yet mainstream, at least cost-effective options for commercial and home construction around the world. Just one example is flooring.The use of renewable cork and bamboo flooring, rare in the 1990s, has become commonplace and within the budget of homeowners shopping at Lowes and Home Depot.

Today, CBF is leading a new generation of environmentally responsible construction. The SmithGroupJJR, architects for the Merrill Center and today one of the premier green architectural firms in the world, joined CBF in constructing the Brock Environmental Center at Pleasure House Point, Virginia. The Brock Center is an innovative example of environmentally sensitive and smart building—among the first in the nation to embrace energy and water independence and designed to meet the strictest environmental standards in accordance with the Living Building Challenge™, recognized as the world's most rigorous design and construction standards. The new building will serve as the hub for CBF's Hampton Roads office and support its Bay education, outreach, advocacy, and restoration initiatives.