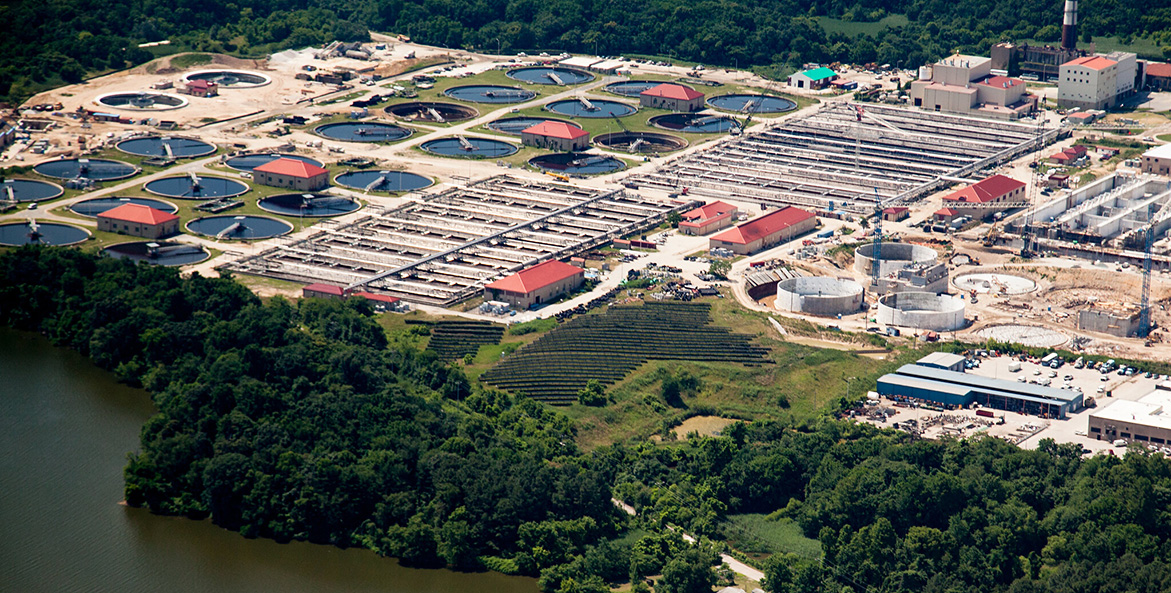 An aerial view of the Back River Wastewater Treatment Plant in Dundalk, Maryland (2016).

What’s going on with pollution issues related to Baltimore’s Patapsco and Back River wastewater treatment plants?

Maryland’s two largest wastewater treatment plants have not been working as designed since at least spring of 2021, resulting in an unknown amount of excess pollution entering the Chesapeake Bay.

The Maryland Department of the Environment (MDE) has detailed the maintenance and operational issues at the Back River and Patapsco wastewater treatment plants in a series of inspection reports.

Many of the problems could be seen in photos released with the reports. Settling tanks at the plants, which are used to remove the sediments from wastewater as it arrives at the plant, were clogged with fats, oils, grease, and sediment. Phragmites, a marsh-loving plant, grew in biological reactors designed to remove Bay pollutants such as nitrogen and phosphorus from the water. 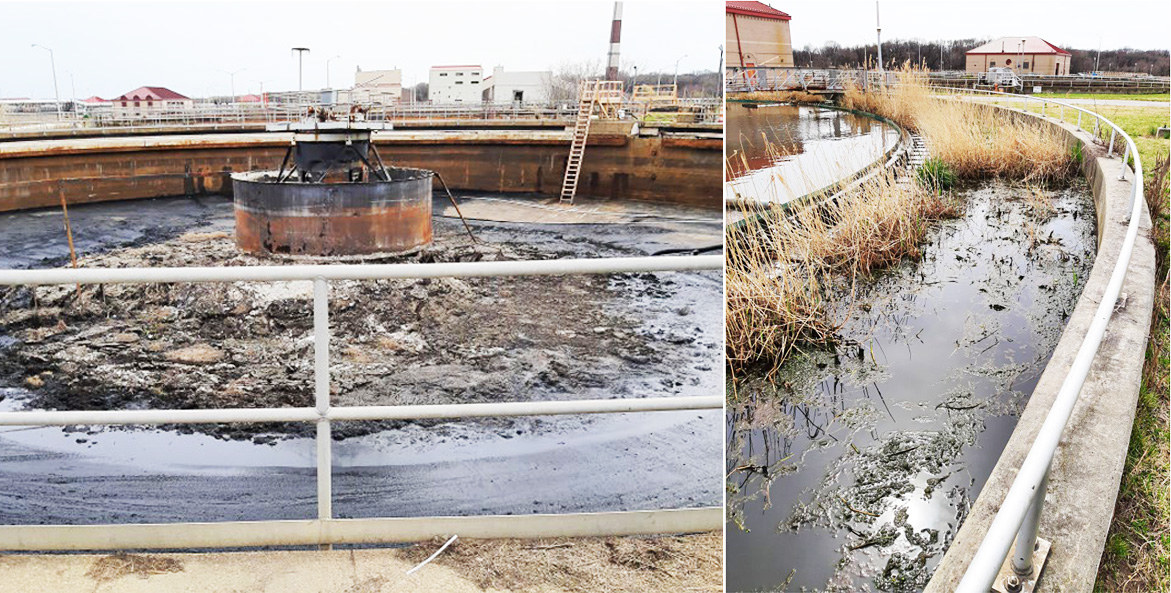 (Left) An inactive primary settling tank at the Back River Wastewater Treatment Plant due to solid buildup. (Right) Phragmites and other vegetation grow in a secondary clarifier at the plant. Photos taken March 22, 2022.

Maryland Department of the Environment

Later in the treatment process, secondary clarifiers were inundated with algae and plant growth preventing them from removing the remaining solids in the water. At the next step, filters designed to remove nitrogen from the water were clogged with solids not filtered out in the initial steps.

Taken together, the multiple problems throughout the treatment process, which the state is now working to fix, have resulted in gray water and black solid particles being discharged into nearby waterways when the effluent should have been as clear and clean as drinking water. The ongoing pollution discharges exceed permitted levels for the plants, which threatens Chesapeake Bay water quality.

Due to public health risks, MDE advised on April 22, 2022 that everyone should avoid any contact with Back River water and if you do accidentally touch the water to wash with soap and water as soon as possible.

How Did We Get to This Point?

In subsequent inspection reports, MDE evaluated how the operational issues were harming the treatment process. The problems caused the plants to discharge excessive amounts of bacteria, nitrogen, and phosphorus into Chesapeake Bay tributaries. In the water, these pollutants threaten public health, cause fish kills, and lead to low dissolved oxygen levels.

Previous MDE inspection reports of the facilities have shown that some of the maintenance issues first began in 2017 and compounded over time.

MDE and environmental groups, including CBF, urged Baltimore’s Department of Public works to quickly fix the issues. Baltimore City officials have since said that the COVID-19 pandemic, supply chain issues, staff retirements, and struggles to hire new staff have all contributed to problems at the plants.

What's Happening to Fix the Plants?

In late March 2022, MDE took over control of the Back River treatment plant from Baltimore City and instructed the Maryland Environmental Service (MES) to fix it. MES has experience operating smaller wastewater treatment plants throughout the state and has since sent employees to the plant to assist with cleanup operations. The Patapsco plant is still being operated by the city.

On June 9, MDE publicly released a report from MES that details the significant staffing and maintenance issues at the plant during the previous year. MES noted the plant is operating at about half of its needed staffing level due to staff vacancies. Staff training at the plant is being conducted by apprentices with limited experience. The facility lacks an interview process for hiring new employees, many of the staff members are unlicensed to run the plant, and there is a lack of support and discipline from management.

MES also reported plant workers are not doing any preventative maintenance, resulting in only limited maintenance happening when a piece of equipment completely fails.

“There is no consideration for maximizing an asset’s performance or longevity,” the report notes. MES determined this lack of maintenance coupled with inattentive and inexperienced staff led to cascading failures at the plant.

After the report was released, Baltimore City agreed to drop a lawsuit contesting the state’s takeover of the plant and cooperate with MES officials working to fix the ongoing issues. As part of a consent order between the state and the city, Baltimore also agreed to reimburse MES for its work.

MES plans to continue its work at the Back River plant until it meets its pollution permit requirements for three months, according to the order.

As the work continues to fix the Back River plant, a lawsuit is being pursued by MDE in partnership with Blue Water Baltimore against the city. That lawsuit, filed in January 2022 by the state, asks the city to get the Back River and Patapsco plants back into compliance with pollution permits or face daily fines.

What Is CBF Advocating for on This Issue?

CBF has urged MDE and the city to work through red tape and immediately fix the maintenance backlog at the plants.

The repairs must take place while not sacrificing the plants’ continued operations because both are essential infrastructure that treat sewage from Baltimore and Baltimore County residents. The Back River plant is designed to treat an average of 132 million gallons of wastewater per day, while Patapsco treats about 63 million gallons per day.

CBF would also like the city and MDE to continue to provide regular public updates while being transparent about what caused the failures. Public information will help residents understand the risks of using waterways near the plants.

CBF remains concerned about whether Baltimore City is capable of fixing the ongoing issues at the Patapsco plant and has encouraged the state to assist efforts to fix that plant.

Lastly, CBF is calling for an accurate accounting of how much additional pollution entered waterways due to issues at the Back River and Patapsco plants. The plants’ permitted pollution limits are used as part of the Chesapeake Bay Clean Water Blueprint to calculate overall pollution in the Bay and figure out ways to offset or reduce the pollution.

If the pollution being discharged by the plants was far greater than their permitted limits it could risk Maryland’s ability to meet pollution reduction goals as part of the 2025 Chesapeake Bay Clean Water Blueprint. Maryland is relying on significant pollution reductions from wastewater treatment plants to reach its goals.

What about All the Expensive Upgrades Recently Made to the Plants?

The Patapsco and Back River plants in recent years have undergone significant upgrades to reach Enhanced Nutrient Removal standards, which remove about 95 percent of nitrogen and phosphorus from the water. The upgrades cost about $260 million at the Patapsco plant and about $575 million at the Back River plant, according to Baltimore’s Department of Public Works. The updated technology at the plants helps Maryland meet its pollution reduction requirements under the Chesapeake Clean Water Blueprint. The upgrades may not work properly if clogged with sediments due to the ongoing operational and maintenance issues, but likely can be fixed.

Workers also recently completed the Headworks Project at the Back River plant in 2021, a system of tanks and pumps designed to alleviate sewage pipe backups happening throughout the city. The estimated $430 million project enables the Back River plant to store wastewater in underground tanks and then pump the wastewater into the plant when it has the capacity to treat it. Prior to the Headworks Project coming online, wastewater would back up into homes and businesses, especially during heavy rainfalls. This infrastructure may help engineers fix the maintenance issues at the Back River plant since the underground tanks can hold millions of gallons of wastewater coming to the plant, potentially giving staff time to fix compromised equipment.

May 5, 2021 – Blue Water Baltimore tests water from the Patapsco plant’s effluent pipe and discovers high bacteria levels. The nonprofit notifies MDE that day about the issue.

May to June 2021 – MDE inspectors find numerous maintenance issues at the Patapsco plant and determine the plant was not meeting its pollution permit limits for 2020 and beginning of 2021.

June to Aug. 2021 – MDE inspectors find several maintenance and operational issues at the Back River plant that led to pollution violations from Aug. 2020 through May 2021.

Aug. 30, 2021 – Blue Water Baltimore reveals in a press release the results of MDE inspections and its findings related to the Patapsco and Back River wastewater treatment plants.

Jan. 21, 2022 – MDE files a state lawsuit against Baltimore City for unauthorized discharge of pollutants at the Patapsco and Back River wastewater treatment plants. The complaint asks the court to require the city to stop all unpermitted discharges from the plant.

Mar. 27, 2022 – Following another failed inspection, MDE announced it would take over the troubled Back River plant and the agency ordered the Maryland Environmental Service to run it.

Apr. 22, 2022 – MDE issues a public health advisory recommending that no one come into contact with water in Back River due to high bacteria levels near the wastewater treatment plant.

June 9, 2022 – MDE releases the MES report detailing the staffing and operational issues at the Back River plant that caused cascading failures to the wastewater treatment process. In response, Baltimore City agreed to cooperate with the state to fix the plant and drop the lawsuit it filed contesting the state's takeover of the plant.