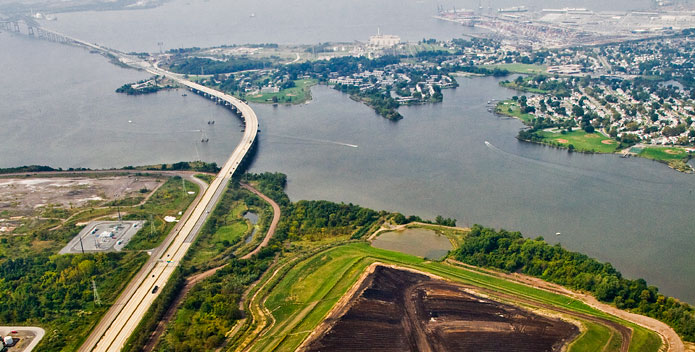 Dundalk neighborhoods sit directly across Bear Creek from the Sparrows Point steel mill. Toxic pollution has been found in the creek's sediment and residents can't recall the last time anyone swam in the creek.

From the Desk of Josh Kurtz

The new law calls for the state to reduce emissions by 60 percent by 2031 and reach net-zero emissions by 2045. Methods to reach the goals include electrifying state vehicle fleets and buildings and creating a climate corps to prepare young workers for careers in renewable energy and other fields.

However, one of the original bill's most significant measures—barring gas hookups in new buildings—was removed due to backlash from utilities and the building industry.

Despite that, CBF believes the bill will set a strong foundation for future efforts to reduce emissions. In the Bay, climate change fueled by greenhouse gas emissions has led to stronger storms, increased flooding, more runoff pollution reaching waterways, and changes in wildlife distribution. “This bill set Maryland up for climate success and positions Maryland as a leader in the fight against climate change,” said CBF Maryland Executive Director Josh Kurtz.

The Chesapeake Accountability Project, a group of several environmental organizations from around the watershed, released a report in March highlighting the long-term decline of Maryland water quality enforcement.

The Maryland Department of the Environment's (MDE) Water and Science Administration has taken an average of 75 actions against water pollution violators since 2016 compared to the average of 168 per year from 2001 to 2015. The decrease in staff and enforcement has led to questions about the state's ability to hold polluters accountable for violating state-issued pollution limits. In the water, excess pollution causes algal blooms and fish kills and can be harmful to human health.

“If we fail to address this issue, it will only make it more difficult for the state to meet the requirements of the Chesapeake Clean Water Blueprint,” said CBF Maryland Senior Scientist Doug Myers.

To correct this problem, CBF worked with Chesapeake Accountability Project members and other organizations to pass a new law this year that will force MDE to more actively inspect pollution permit violators and review expired permits. The new law goes into effect in July.

The work to clean up Baltimore's former Bethlehem Steel Mill at Sparrow's Point got a boost in March from the federal government. The EPA announced it will list the sediments beneath the water of Bear Creek as a Superfund site.

The designation enables the EPA to access significant federal funding to investigate the extent of pollution in the sediments and eventually clean them up.

“Many Superfund sites are in communities of environmental justice concern,” said EPA Mid-Atlantic Regional Administrator Adam Ortiz, in a statement. “Through the cleanup of these sites, the Superfund program works to ensure that residents do not bear a disproportionate share of the negative environmental consequences resulting from past industrial, governmental, and commercial operations.”

CBF advocated for a federal cleanup in Bear Creek after a 2015 study commissioned by CBF found elevated levels of chromium, zinc, copper, and cadmium in sediments near the former mill site. CBF is also working with residents of the historic African American community of Turner Stations, which is across the creek from the former mill, to ensure their input is considered as EPA cleanup plans are developed.