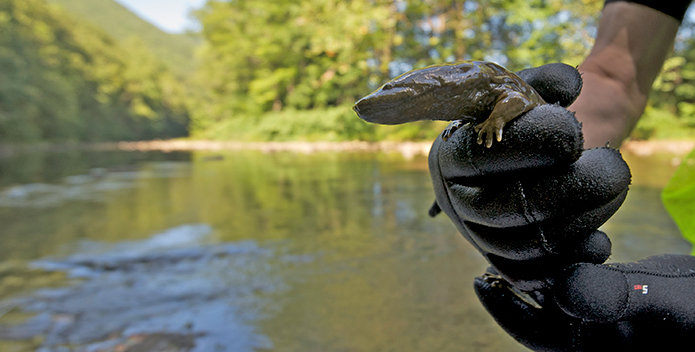 Pennsylvania's Eastern hellbender is a Susquehanna watershed native and the largest amphibian in North America (they can grow as large as 29-inches).

Helping the Hellbender Hang On!

Hellbenders are the largest salamander species in North America. They can be found in cold, clear, swift-running rivers and streams of the Susquehanna watershed. They prefer rocky streambeds with crevices, which they use for protection and for nesting sites. But the loss of forested buffers along these waterways is resulting in warmer waters and silted streambeds, degrading their habitat and decimating their numbers in streams where they were plentiful as recently as 1990.

The SLC students wondered why more people don't know about hellbenders and the problems they're facing. So they came up with a plan to designate the Eastern hellbender Pennsylvania's official state amphibian. To this end, they drafted a piece of legislation and met with elected officials to get it passed.

Organizations supporting the hellbender bill include: