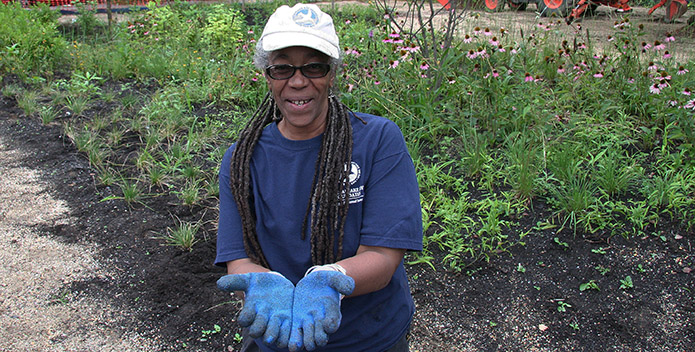 With CBF's help, residents in low-income sections of three southcentral Pennsylvania cities continued to make the most of opportunities to improve local water quality, reduce flooding, and beautify their neighborhoods.

"Meeting people where they are, to appreciate their concerns and priorities, builds understanding, respect, and helps empower people," says CBF's Pennsylvania Executive Director Harry Campbell. "Clean water is a vital part of that. Our families and communities depend on it. That's why we all should have the knowledge and opportunity to be part of the solution."

In York, a few sidewalks bear colorful messages about keeping trash out of storm drains.

Over 100 new street trees are taking root in Lancaster.

These and other environmental justice projects are made possible by an Environmental Education Grant from the state Department of Environmental Protection (DEP) and matched by CBF.

Pennsylvania DEP Secretary Patrick McDonnell defined environmental justice as "empowering low-income minority communities with better environmental information so they can more fully participate in the kinds of processes we at the department engage in every day; connecting people with their environment and their government to get better outcomes."

Urban and suburban polluted runoff is a leading source of stream pollution in Pennsylvania. Polluted runoff from impervious surfaces like roofs, streets, and parking lots finds its way into the nearest river or stream, threatens drinking water, and can cause nuisance flooding that damages homes and businesses.

With the grant, awarded in 2017, CBF has been collaborating with local partners in urban communities about problems caused by polluted runoff, how to have a say in how it is addressed, and taking action.

"Partnership is everything. Many hands make light work," said Carla Johns, CBF Grassroots Field Specialist in Pennsylvania. She coordinates many of the environmental justice projects on behalf of CBF.

In Harrisburg, volunteers planted new street trees in Midtown and two three-tier rain barrel systems were installed at the Camp Curtin YMCA in the city.

A demonstration rain garden was added to Harrisburg's Summit Terrace neighborhood in partnership with Capital Region Water. Rafiyqa Muhammad is the rain garden maintenance specialist for CBF's Pennsylvania office and overseeing its progress.

Muhammad, a native of Harrisburg, finds her biggest challenge to be educating her community about the value of rain gardens. "I'm praying that they take care of them," she said. "Keep them clean, help maintain them. Aren't we tired of how our city looks?"

In another activity, CBF staff and the Appalachian Audubon Society prepared garden sites at Benjamin Franklin and Foose elementary schools in Harrisburg, to serve as outdoor classrooms, bird habitat, and native pollinator garden

At a workshop at Columbia Crossings River Trails Center in Lancaster County, over 40 people helped to make rain barrels for homeowners. A composting workshop at the same location was part of CBF's Homeowner's Best Management Practices series.

A paddling trip from Columbia and on the Susquehanna River as part of Lancaster Water Week, encouraged paddlers, many for the first time, to enjoy local waterways.

In York, winners of the "Street 2 Creek" contest added their colorful artwork to storm drains in high traffic areas of the city, promoting the importance of keeping trash out of the stormwater system.

In another part of York, volunteers from Salt and Light youth ministry dug and planted a rain garden in the city's Royal Square community garden.

Volunteers also took part in a United Way community garden workday, and CBF donated plants and helped get a new garden into the ground at the United Way Foundation in York.

CBF plans to add an urban outreach program to its environmental justice efforts in Pennsylvania. Workshop topics could focus on stormwater issues and urban agriculture. Residents would be encouraged to get involved in local government.

"If you don't have the buy-in of the community you aren't going to get very far," Carla Johns added. "People who know their community best have made it blossom because they care and want to see their community improve."

What's Up in Pennsylvania