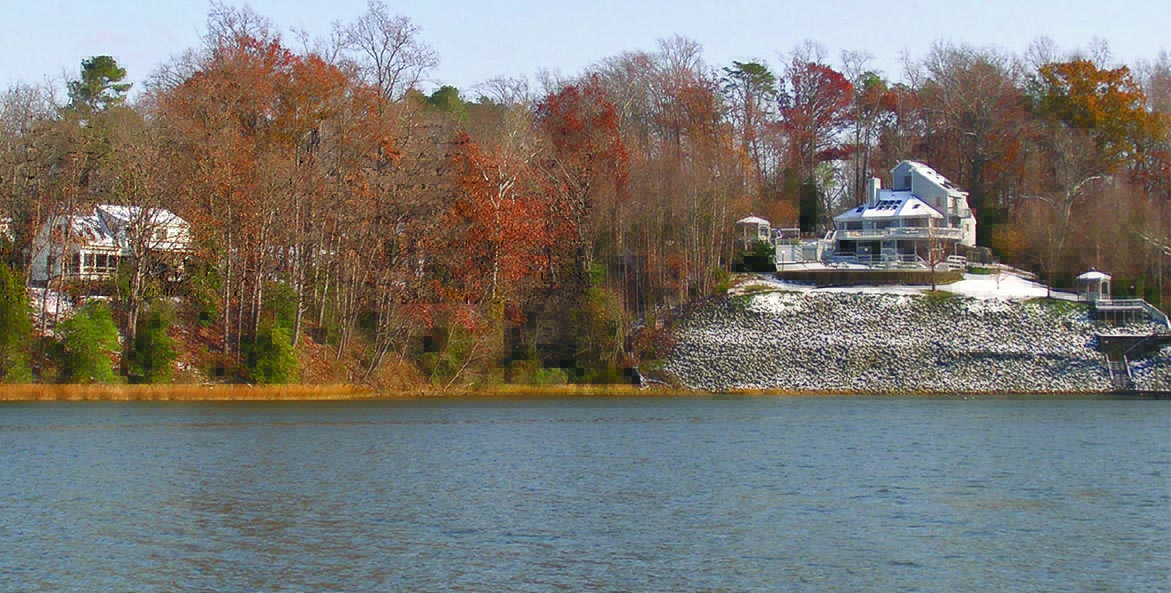 A contrast in shorelines: The living shoreline on the left featuring marsh grasses, trees, and shrubs provides many water quality and wildlife benefits while blending in with the natural environment. The shoreline on the right is completely covered in stone and has no vegetation behind it to prevent erosion.

Living shorelines are the preferred approach to shoreline stabilization, but there is no one-size-fits-all method for designing, installing, and maintaining a living shoreline. This can be frustrating and sometimes hard to navigate. The list below breaks the process down into six steps and allows homeowners to make an informed decision on the best management practice for erosion prevention on their property.

If you would like a visual reminder of these six steps as you work on your project, print out our single-page PDF.

Note: many of the links on this web page will take you off of CBF's site.

Step 1: Getting the Lay of the Land

This illustration of an "ideal" living shoreline shows a succession of natural filters, from trees and shrubs above the tide line down to underwater grasses in shallow water, that normally would be found in undisturbed ecosystems.

Knowing your site's specifics is a first step to help understand if a living shoreline may be right for you. Some initial research will reveal both the possibilities and limitations of your site's living shoreline potential. Use our Site Evaluation interactive PDF to help guide you through the initial process.

VIMS Center for Coastal Resources Management (CCRM) has done a lot of research and data collection on the best management practices for shoreline stabilization. They have put all the findings into an interactive map. Instructions on how to access the map are below.

Use the VIMS Shoreline Decision Support Tool for guidance on the shoreline erosion management strategies appropriate for your setting.

Evaluate your site to determine if only marsh enhancement is needed.

In some cases, sand backfill and bank grading may be needed to ensure proper elevations for plant survival. In other cases, creation and enhancement of fringe marsh without protective structures have the potential to be successful as well! Here are some site conditions to consider:

Contact CBF staff member Kati Grigsby at kgrigsby@cbf.org or 757-644-4117 for an assessment.

Evaluate your site to determine if oysters are a suitable component.

Living Shoreline Oyster Reef Suitability
For some sites, oysters and oyster structures can be used to help attenuate wave energy. A viable site for an oyster reef needs to contain these elements:

To see if oysters would be a viable option at your location, see our Living Shoreline Oyster Reef Suitability Map for Virginia.
This map is for educational purposes only and if you choose to incorporate oysters into your living shoreline, we recommend speaking to a professional beforehand. There are several oyster professionals and oyster restoration techniques available.

Incorporating Oysters into Living Shorelines
There are many benefits of using oysters as part of a living shoreline.

Testing Oyster Reef Materials in the Nansemond River
A pioneering partnership between the Nansemond River Preservation Alliance (NRPA) and Chesapeake Bay Foundation (CBF) will deploy a variety of innovative oyster restoration techniques with the hope that these living shoreline will increase oyster populations and prevent erosion, among other benefits.

Find out more about this incredible project in our interactive story map below.

Ask for additional advice from non-profits

There are professionals for hire who can assist you with living shoreline projects, including a contractor (to help you build), an agent (to help you through the process and permitting), and others who can help you design your living shoreline. Our Living Shorelines Contractors List can get you started.

The Chesapeake Bay Landscape Professional (CBLP) Certification program directory lists over 175 CBLP-certified professionals who bring a wealth of experience to sustainable landscaping projects. You can filter the directory by "living shorelines" to find qualified professionals.

These programs will help homeowners pay for a living shoreline:

Programs for private organizations and municipalities:

There are many factors that play into the final cost of a living shoreline. In general, if a living shoreline is non-structural and does not require any bank grading, then the project cost is much less than a hardened shoreline. No matter the cost, it is nice to have an idea for budget purposes. Also, locating the source for your materials and having the material specifications is needed for the permit application. Our Living Shorelines Supplier List can get you started.

We highly recommend getting in touch with your local VMRC and Wetlands Board representative for a pre-application site visit to discuss your site and preliminary plans. Look up your contacts for your locality:

Timelines you should keep in mind:

A marine agent or contractor can help you develop a plan and navigate the permitting process. But if you want to do it yourself, there are some important things to know.

To speed permitting and encourage Living Shorelines as the preferred method of coastline management, Virginia created a General Permit for Living Shorelines. If you meet the criteria, your application and processing fees are waived, and the Virginia Marine Resources Commission may issue your permit without a public interest review—which saves you time and money!

There are two categories of “General Permit.”

For these permits, all applicants are required to fill out a Joint Permit Application (JPA). Don't worry! Although the application looks long and daunting, you will only have to fill out certain sections. See "Joint Permit Application (JPA)" on the Center for Coastal Resources Management Permit Information page for step-by-step instructions for filling out the permit application. If you have any issues or need additional assistance with the application process, feel free to contact your local VMRC or Wetlands Board staff member.

Permits do require that adjacent landowners be notified of the project to ensure they have no objection.

Once your permit is ready for submission, email or mail the application to VMRC. Submission instructions are available here (pages 2-3). We strongly encourage you to notify VMRC's habitat division of your submission (757-247-2252) once completed.

Here are some helpful things to keep in mind: 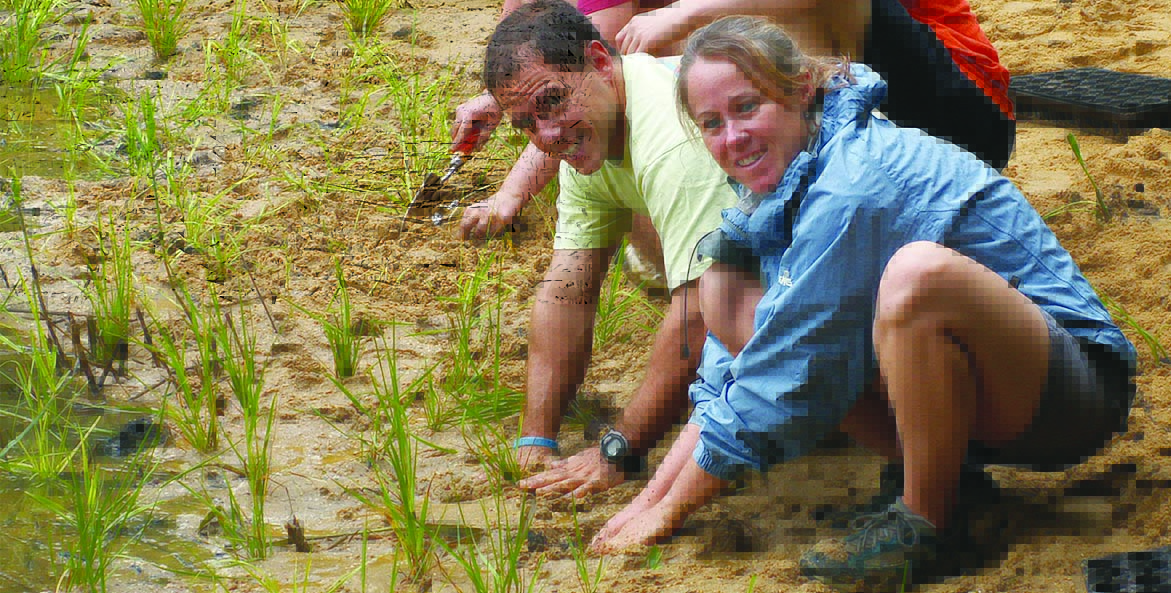 If you need volunteers for the construction, reach out to any of these non-profit groups for volunteer planting assistance. The more lead time you give them to recruit volunteers, the better, so plan as far ahead as possible!

If you have a contractor, they will most likely be the one purchasing the materials needed for your project. If needed, download the Living Shorelines Supplier List.

Like most outdoor projects, how soon the project gets completed is based on weather conditions. However, tide also needs to be considered when installing a living shoreline.  Ideally living shorelines are constructed at low tides to allow for ample access to the site. The Center for Coastal Resourcs Management website has these design guidelines for planting.

Hint: Keep a narrow unplanted path to the water for beach access.

To ensure your living shoreline does not become an all-you-can-eat buffet for ducks and geese, goose netting, a three- to four-foot tall mesh enclosure, needs to be installed immediately after grass planting. This is just for the first year to allow for grasses to fully develop.

Don't forget to take before, during, and after pictures to document the progress.

Step 6: Living With Your Living Shoreline 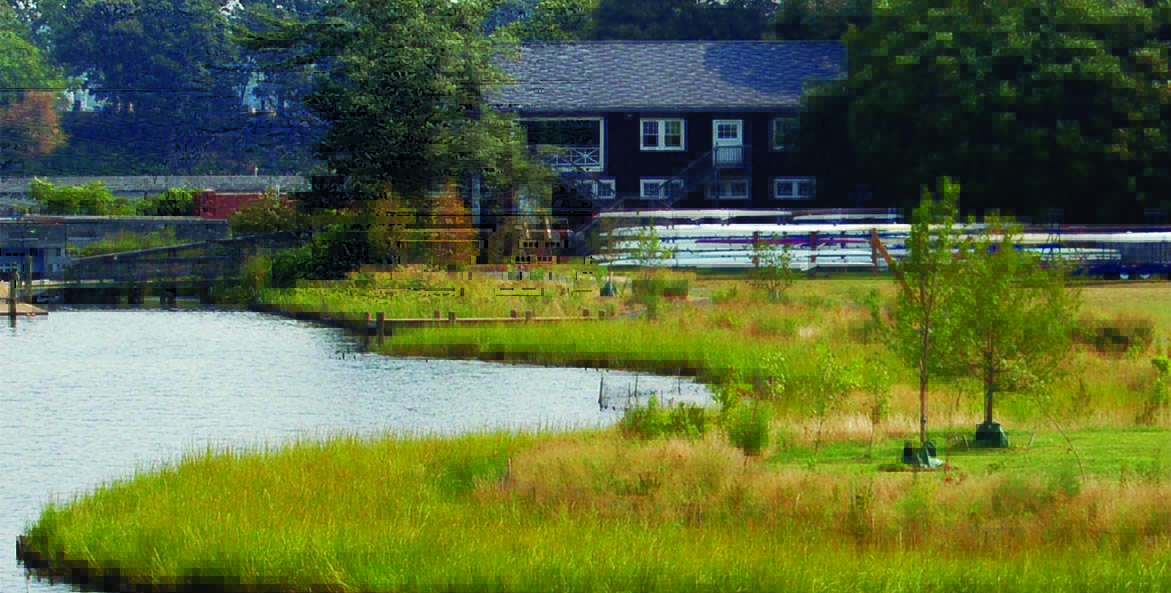 A living shoreline of marsh grasses fronted by a biolog works well in these calm cove waters.

Maintaining your living shoreline is an on-going process.

The first growing season is a critical time for plant development. Here are some things to keep an eye out for during this time:

Educate your neighbors about living shorelines.

Educate your neighbors and community about why you constructed a living shoreline and what the benefits are to your local watershed and the Bay. The more connected these shorelines are, the better they function.

Enjoy your beautiful shoreline and the wildlife it will attract!

For more information or if you see something that needs to be added to our website, contact Kati Grigsby at kgrigsby@cbf.org.