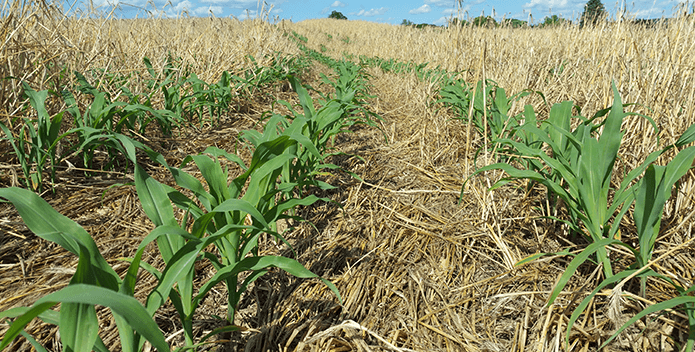 New corn emerges through a thick matting of terminated rye, the cover crop that protected the soil and conserved nutrients through the winter. Conservation practices like these protect our rivers, streams, and the Chesapeake Bay.

Why the Farm Bill is Crucial to Saving the Bay

The Farm Bill, which is passed every five years or so, is crucial to Bay cleanup efforts because it includes conservation programs that help farmers stop pollution at its source and ensure our families enjoy clean water.

The House and Senate passed a compromise Farm Bill, which will increase conservation funding, simplify and streamline the Regional Conservation Partnership Program, and help ensure adequate and fair compensation to landowners willing to implement forest buffers. The President signed this bill, now known as the Agriculture Improvement Act of 2018, into law on December 20, 2018.

The new Farm Bill contains several key provisions that were a priority for CBF, including amendments to the Conservation Reserve Enhancement Program (CREP) and to the Regional Conservation Partnership Program (RCPP).

CREP and the RCPP need to keep pace with the Cheseake Clean Water Blueprint.

CREP is a subprogram of CRP that helps landowners in the Bay watershed plant trees along the banks of streams, referred to as forested riparian buffers. These buffers significantly reduce sediment and nutrient runoff and are one of the most cost-effective methods of improving water quality. Recognizing this, the Chesapeake Bay watershed states committed to foresting 70 percent of the riparian (stream bank) area in the watershed by 2025 by restoring 900 miles of buffers each year.

The Chesapeake Bay Foundation is a longtime partner in the CREP program. In Pennsylvania alone, CBF's restoration specialists have assisted farmers in installing more than 2,300 miles of stream buffers since 1997. Learn more about the Conservation Reserve Enhancement Program (CREP). Working with many partners, we leveraged roughly $25 million in private, state, and federal resources.

Unfortunately, however, enrollment has waned in recent years. In 2018 Pennsylvania Senator Bob Casey introduced legislative language aimed to reinvigorate CREP, thereby helping Pennsylvania and the other Bay jurisdictions meet state Chesapeake Bay cleanup goals.  CBF staff worked closely with Senator Casey's staff on this language which was informed by input from a broad variety of stakeholders brought together by the Chesapeake Bay Alliance. Much of this language was adopted as part of the new Farm Bill.

Although it is still far smaller than the 32 million acres of past farm bills, the new Farm Bill slowly regrows CRP from 24 million acres to 27 million acres by 2023. Here are some of the other key provisions:

In 2014, Congress established the RCPP in an effort to prioritize conservation resources and attract and leverage private sector partners and resources. The RCPP replaced the Chesapeake Bay Watershed Program, which had been unique for its commitment to target resources to priority lands. The new program was designed "to accomplish the functions of the Chesapeake Bay Watershed Program as well as the Agricultural Water Enhancement Program, the Cooperative Conservation Partnership Initiative, and the Great Lakes Basin program."

Unfortunately, the RCPP has not lived up to this goal. The number of partnerships and allocated federal resources for the Chesapeake Bay Watershed have been lower than anticipated leading up to 2018. While the RCPP requires the USDA to report on which critical conservation conditions the projects address, it does not require reporting on the results to water quality. On the administrative side, stakeholders have experienced significant issues with the RCPP.

CBF coordinated policy discussions among stakeholders and agriculture restoration specialists to develop recommendations for adjustments that would ensure the program performs as intended. For details on specific issues and recommendations, see CBF's white paper, "Strengthening the Regional Conservation Partnership Program for the Chesapeake Bay Region."

Maryland Senator Chris Van Hollen introduced amendments to the RCPP to increase funding, give preference to areas like the Chesapeake Bay that have water quality problems, and help increase program efficiency. Here again, many of these provisions were adopted under the new Farm Bill including a tripling of mandatory funding from $100 million annually to $300 million annually and an increase in the proportion dedicated to Critical Conservation Areas from 35 percent to 50 percent. The Chesapeake Bay Watershed is one of eight Critical Conservation Areas.

Some of the other improvements to the RCPP under the new Farm Bill include:

As mentioned above, two more Farm Bill conservation programs deserve a lot of credit for improvements being made to water quality across the watershed.

Find out more about farm conservation and the economy

Learn more about how farm bill-supported conservation programs help farmers and the Bay in our Farmer Success Stories blog series.