There are more than a dozen varieties of underwater grasses, also called submerged aquatic vegetation or SAV, that grow in shallow water regions of the Bay and its rivers.

At its most pristine, the Bay may have supported several hundred thousand acres of underwater grasses. Since the 1950s, there has been a tremendous decline of grass beds due to degraded water quality and climate change. CBF is working to help meet the Chesapeake Bay Watershed Agreement target of 185,000 acres of underwater grasses covering the bottom of the Bay and its tidal tributaries by 2025.

Like most grasses on land, underwater grasses require sunlight to grow and thrive. When the Bay's waters become clouded with sediment from stormwater runoff and algal blooms resulting from excess nutrients in the water, grasses find it harder to survive. 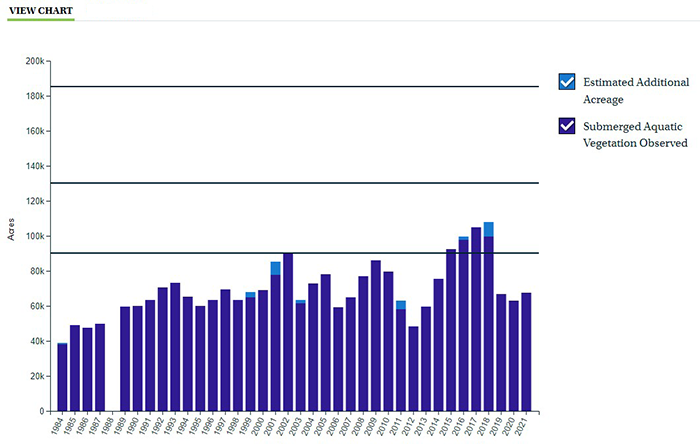 In Bay restoration we don't often see straight-line progress, and the recent decline in underwater grasses in the Bay is a sobering reminder that extreme weather can set back recovery. It also reminds us that we need to focus on the elements we can control, especially reducing pollution to the Bay and its rivers and streams.

Though we can't control Mother Nature, reducing pollution—including better managing stormwater runoff before it gets into rivers and streams—will help mitigate weather extremes, improve water quality, and contribute to Bay grass revival. The 2018 survey seems to support that theory. Virginia, Maryland, Pennsylvania, the other Bay states, and the District of Columbia all committed to reducing pollution from all sources as their part of their Clean Water Blueprint.

All of CBF's activities—from land-use planning and stormwater management to wetland protection and riparian buffer planting—contribute to Bay grass revival.

Progress is being made, but many local waterways and the Chesapeake are still polluted. If we don't keep making progress, we will see more signs declining grasses numbers, and we will continue to have polluted water, human health hazards, and lost jobs—at a huge cost to society.