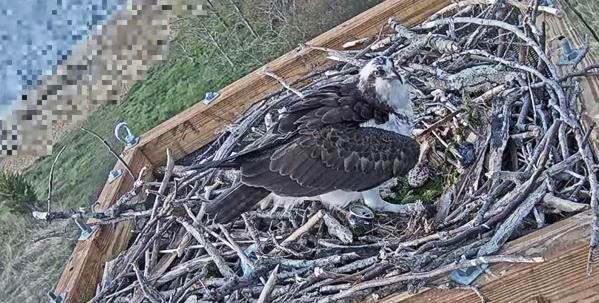 A camera shot from spring 2016 of an osprey with her egg.

Hello osprey...and geese fans! Welcome to our Bay/nest cam. This penthouse overlooking our Merrill Center headquarters and the beautiful Bay has housed both geese and osprey over the years.

Often called the "osprey garden," the Chesapeake Bay has the most concentrated population of osprey in the world! Every spring, these quintessential Chesapeake birds travel thousands of miles to return to the same nests, where they reunite with their mate, breed, and fish for menhaden.

Visit our osprey page to learn more about these birds that call the Chesapeake region home.

Please remember that this is no Disney film! Nature can be a cruel place, but it is our policy not to interfere with anything that goes on in the nest. We also will use our discretion to turn off the cameras at any time should we choose.

In 2016, a young osprey couple called this nest their home and even produced some eggs. Unfortunately, those eggs were consumed by a crow when left unattended.

As you can imagine, CBF staff and supporters were eagerly awaiting the osprey return the following year. However, before the osprey could lay claim to their nest, a pair of resident population Canada Geese took possession and in early April 2017 mother goose laid six eggs. Roughly a month later, the six goslings followed their parents in taking the 35-foot plunge off the osprey platform to the ground. A few minutes later, the family took their first swim together in the waters of Black Walnut Creek.

Again, the last few years we've had geese. On May 5th, 2018 the goslings departed the nest with their parents and headed for the waters of Black Walnut Creek. During the first few weeks of March 2019, an osprey and its mate were hovering around the nest, but a pair of geese who were also eyeing the platform beat them to it. On April 28, 2019, our Canada goose couple and their seven goslings offically jumped the nest. The geese were back again for 2020, hatched seven eggs, and everyone hopped off the nest on April 24, 2020.

After the geese departed the nest in 2018, a pair of osprey moved in and hatched a chick of their own on July 2, 2018. Take a look at a video snapshot from July of mama osprey feeding the baby a hearty meal of menhaden and one more from August of that year when the chick took her first flight from the nest.

For best viewing experience, use Firefox or Chrome browser. Video may not load for some Internet Explorer users.

Big thanks to BGE for helping us build this osprey platform and install a web cam so that osprey lovers like you might enjoy it. BGE also asks that their customers help them protect ospreys and continue safe and reliable delivery of electricity by letting them know of nests on or near utility equipment by emailing ospreywatch@bge.com. A trained crew will be dispatched to shield the birds from equipment or relocate the nest.