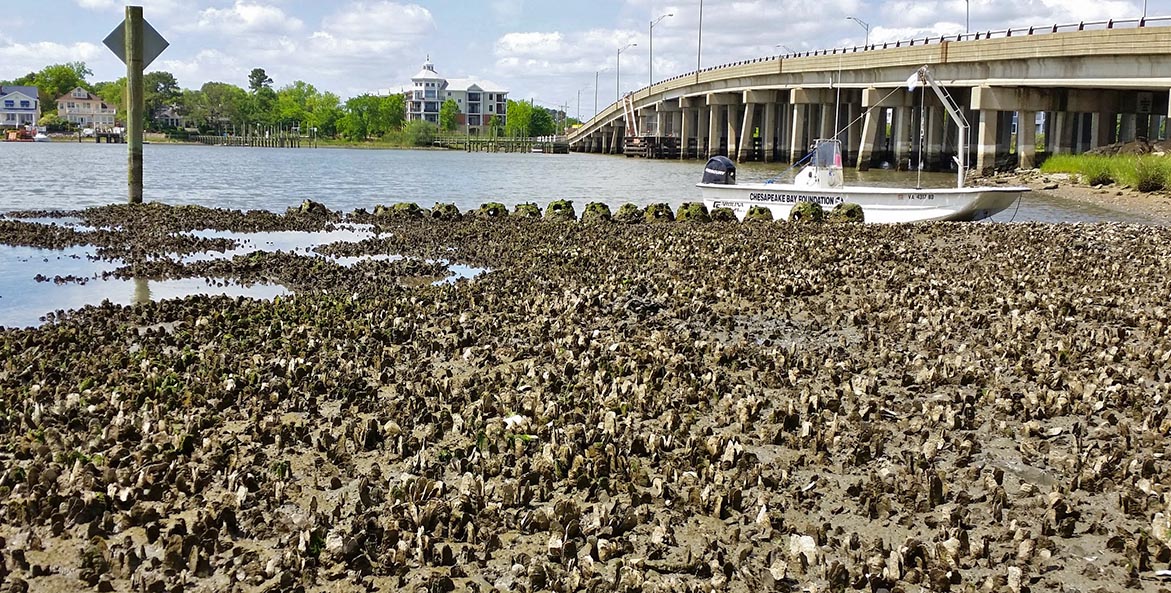 Restoring oysters in 11 tributaries by 2025

State, federal, and local partners are rebuilding oyster reef ecosystems in 11 tributary rivers to improve water quality and biodiversity in the Bay.

Recognizing the importance of oysters to a healthy Bay, the 2014 Chesapeake Bay Watershed Agreement includes an ambitious goal for the large-scale restoration and protection of native oyster populations and the tidal rivers they call home. Under the goal, Maryland and Virginia selected 11 rivers for targeted projects aimed at rebuilding healthy, functioning oyster reefs by 2025.

As of December 2021, reef construction was complete in five of those rivers—Harris Creek in Maryland and the Lafayette River, Piankatank, Eastern Branch of the Elizabeth River, and Great Wicomico in Virginia. Five more are expected to be completed by the end of 2022. Restoration teams continue to seed the reefs with oysters and monitor their progress.

The remaining six rivers include the Tred Avon, Little Choptank, St. Mary’s, and Manokin in Maryland, and the Lynnhaven, and Lower York in Virginia.

Track the progress of the restoration effort on the Chesapeake Bay Program's Chesapeake Progress website.

Why Large-Scale Restoration Is Important

Oysters are a keystone species in the Bay and have a direct impact on both water quality and habitat. They improve water quality and clarity by filtering out sediment and algae. Their three-dimensional reefs provide crucial habitat for a wide variety of aquatic life, including crabs and fish.

As a result of decades of overharvesting, pollution, and disease, the Bay’s native oyster population is a fraction of historic levels. Large-scale restoration projects are the best chance for reversing the population decline and safeguarding the vital services oysters provide. These projects create refuges for adult oysters that reproduce and seed additional reef areas in the Bay. They also build functioning reef systems that work collectively to improve the Bay’s water quality and biodiversity.

Monitoring of completed reef projects shows that the strategy is working. Oysters have flourished in Harris Creek, according to reports by the National Oceanic and Atmospheric Administration. A 2018 Nature Conservancy study determined the oyster reefs can filter the full volume of Harris Creek in less than 10 days during summer months. In the Lafayette River, a CBF survey in 2017 found that oyster reefs are reproducing and thriving.

Restoration projects in each of the 10 rivers undergo several phases, which include developing a restoration plan, constructing and seeding reefs with oysters, and monitoring and evaluating progress.  Strong collaboration between state, private, and federal partners, including NOAA and the U.S. Army Corps of Engineers, is vital to the projects’ success.

To accelerate restoration efforts, CBF in 2018 founded a diverse coalition of organizations known as the Chesapeake Oyster Alliance. The Alliance aims to add 10 billion oysters to the Bay by 2025.