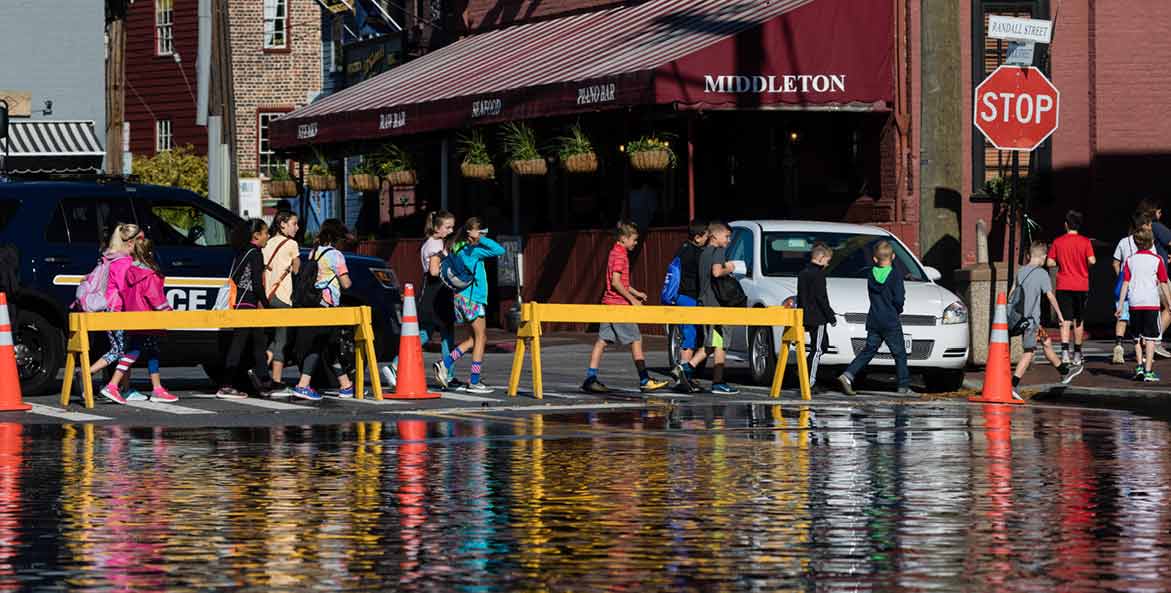 Climate change is increasing the amount of flooding seen in susceptible areas, such as Annapolis, Maryland, pictured here.

The Chesapeake Clean Water Blueprint is working. Over the long term, polluted runoff in many areas is decreasing, along with summer dead zones. But the road to finishing the job is steep. In addition to the unique challenges each state must overcome to meet the Blueprint targets, climate change and the continuing loss of forests and farmland to development are serious threats to progress. In fact, they are increasing the amount of pollution in the watershed. To address these challenges and meet the 2025 Blueprint targets on time, the U.S. Environmental Protection Agency (EPA) must hold states accountable to their commitments and the federal government should play a larger role in mobilizing the resources necessary to finish the job.

Climate change is affecting the Chesapeake Bay and rivers and streams across the watershed—adding more stress to a system still out of balance. Water and air temperatures are increasing, putting both wildlife and people at risk of dangerous heat and worsening the Bay’s low-oxygen dead zone. Sea levels are rising at a rate nearly twice the global historic average, causing damage to habitat and property. And record-breaking storms are becoming more common, washing more pollution into rivers and the Bay. All of this makes achieving pollution-reduction targets more difficult. Watershed-wide, EPA and the states agreed practices need to be in place to reduce an additional 5 million pounds of nitrogen and 0.5 million pounds of phosphorus by 2025 to account for climate change. The states must incorporate these additional reductions into their Blueprint plans beginning in 2022. Preliminary estimates indicate that number could double—requiring 10 million pounds of additional nitrogen reductions—by 2035, highlighting the urgency of addressing climate change impacts now, rather than later.

Find out more about the impact of climate change on the Bay and its rivers and streams.

Land Development and Accounting for Growth

Preliminary data suggest that between 2014 and 2018, the Chesapeake Bay watershed experienced a net change of 270,000 acres of forest and non-urban tree canopy due to such land use/land cover modifications as timber harvest, urbanization, agricultural expansion, and other drivers. Preliminary data suggest that within the watershed, we have added nearly 25,000 acres per year of new urban land over a recent four-year timeframe. These are troubling figures for the watershed’s future. Forests and other open lands provide wildlife habitat, moderate heat, supply fresh water for drinking, trap carbon, and are crucial for filtering out pollution before it reaches rivers, streams, and the Bay. But none of the states are accounting for or adequately offsetting the effects of this loss. Nor do state regulations adequately account for the additional polluted runoff generated by new roads, lawns, buildings, and other hard surfaces. To achieve the Blueprint by 2025—and protect the long-term health of streams and the Bay—this must change.

Find out more about land development and growth challenges facing the Bay.

EPA is the only independent party that can hold states accountable to their Blueprint commitments. It is required to exercise its authority under the Clean Water Act to ensure that all Bay jurisdictions develop plans that meet their targets for reducing pollution by 2025. To date, the agency has failed. After EPA initially accepted inadequate plans from New York and Pennsylvania, CBF and our partners, in conjunction with three watershed states and the District of Columbia, sued the agency in 2020. But plans alone are not enough. Pennsylvania is due to submit an updated plan to EPA, but the agency must ensure there is reasonable assurance the Commonwealth can implement it on time. Pennsylvania’s historically paltry funding for clean water and enormous gap in progress to date indicate the need for drastic change. EPA must take much more forceful action to ensure that change happens.

Additionally, the Bay restoration’s federal partners must step up to the plate. The best chance to achieve the Blueprint is a major acceleration of conservation practices on farms, particularly in Pennsylvania. The same practices that improve water quality can reduce greenhouse gas emissions and build resilience to climate change. The federal government should urgently direct all possible resources to support this effort and the United States Department of Agriculture (USDA) should establish the Chesapeake Resilient Farms Initiative to ensure that sufficient levels of federal funding for agricultural conservation practices are sent to areas in the watershed that will have the greatest impact.