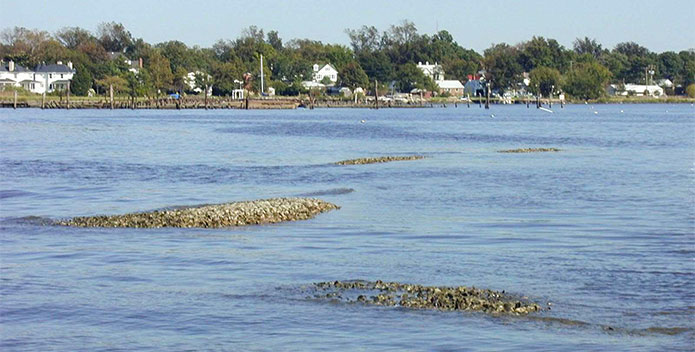 The first 20 words of the 1972 Clean Water Act are straightforward and completely impossible to misinterpret: "The objective of this Act is to restore and maintain the chemical, physical, and biological integrity of the Nation's waters."

More than 40 years later, bodies of water across the U.S. are so polluted that huge areas are unable to support aquatic life, human health is at risk, and our economy is hurt. The Chesapeake Bay has been on EPA's "dirty waters" list for decades.

According to the Clean Water Act, states must develop a Total Maximum Daily Load (TMDL) specifying the maximum pollution levels allowable to meet water quality standards for all waters identified on their "dirty waters" list.

The Chesapeake Bay is arguably the most studied large body of water on earth. Forty years of intense scientific investigation by leading estuarine scientists have identified why the Chesapeake is degraded and how to fix it. No other water body in the world can boast this level of scientific understanding.  It is an unusually complex ecosystem, but there is a great deal of scientific consensus on the causes of its decline. First and foremost among these causes is a huge and systemic overabundance of human-introduced nitrogen and phosphorus flowing into the Bay from the land and the air. This excess nitrogen and phosphorus feeds algal blooms that block sunlight to underwater grasses and contribute to the formation of dead zones, areas in the Bay and its tidal waters without sufficient levels of oxygen. Ultimately, this degradation of water quality contribute to the decline of the Bay's living resources.

Prior to 1983, with rare exceptions, the jurisdictions that make up the Bay watershed made their own plans and programs independent of one another. Even after the first joint agreement was signed in 1983, efforts remained voluntary—and, unfortunately, ineffective:

The definition of insanity is to keep  doing the same thing over and over and expecting different results. The decades long history of signing Chesapeake Bay agreements and then failing to achieve those commitments clearly wasn’t working.  If there were to be any hope of breaking out of this cycle, the federal, state, and local governments of the region needed to commit to take dramatic, cooperative action.

On January 5, 2009, CBF and a group of partners filed suit against EPA asserting that EPA was legally required to use its existing authorities to set science-based pollution limits (i.e., the TMDL), but more importantly to provide leadership, ensure accountability and impose consequences on the Bay jurisdictions for failing.

Settlement discussions were begun with the new Administration. On May 12, 2009 President Obama issued an Executive Order calling the Chesapeake Bay a "national treasure" and instructing his administration to exercise leadership and develop a federal strategy to restore the Bay. Reports on the strategy were due in September, a draft strategy in November, and a final strategy on May 12, 2010.

On May 11, 2010, CBF, its co-plaintiffs, and EPA settled their lawsuit with a binding agreement that required EPA to take specific actions by dates certain to ensure that pollution to local rivers, streams, and the Chesapeake Bay was reduced sufficiently to remove the Bay from the federal "dirty waters" list.  Among other commitments, the settlement agreement incorporated the Chesapeake Bay TMDL as well as an “accountability framework” designed to hold states accountable for developing and implementing clean-up plans and two-year milestones.

Signed in 2014, the Chesapeake Bay Watershed Agreement marked the first time representatives from the entire watershed signed on to a Bay cleanup agreement. The agreement includes 10 goals, each with a series of time-bound, measurable outcomes to accelerate pace of restoration and protection of the Bay watershed and align federal directives with state and local goals. In a letter, partners promised to openly and publicly engage watershed citizens in implementing these goals and outcomes. Partners also identified the management strategies they plan to participate in. 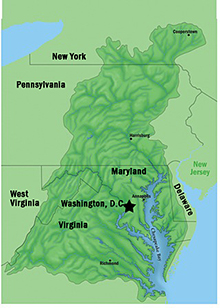 (above) The dark green area shows the Chesapeake Bay watershed as it spans six states and the District of Columbia. From its headwaters in Cooperstown, New York to the Virginia Capes, where its waters collide with the Atlantic Ocean 650 miles away, the Chesapeake is a single biological and hydrological system.

The Chesapeake Bay receives half of its water from a network of 110,000 streams and 1.7 million acres of wetlands, most of which are non-navigable tributaries and non-tidal wetlands that drain to those tributaries.

More than 40 years of scientific research by the Stroud Water Research Center in southeastern Pennsylvania attests to the critical importance of small headwater streams in removing pollution from higher order streams and rivers, as well as in preserving aquatic and riparian life throughout the entire system.