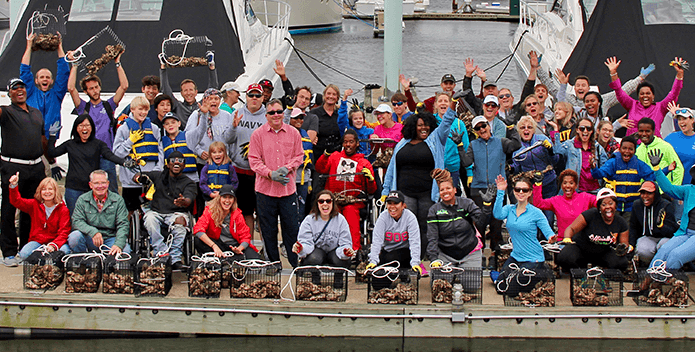 Oyster gardeners set their cages for the winter at Lighthouse Point.

The Waterfront Partnership of Baltimore

The Great Baltimore Oyster Partnership is a collaboration between the Waterfront Partnership of Baltimore’s Healthy Harbor Initiative and the Chesapeake Bay Foundation (CBF).

The program was launched in October 2013 as the Healthy Harbor Oyster Partnership. The following year, the program expanded and changed its name to the Great Baltimore Oyster Partnership. The hope was to restore a small part of the oyster population that once was a fundamental part of Baltimore and Maryland's identity, economy, and ecosystem, and also to help educate Baltimore residents about the important role that oyster play in providing habitat and filtering the water. In July 2019, the Partnership met an audacious goal of planting five million seed oysters. And the work continues.

The Great Baltimore Oyster Partnership connects the business community and residents of Baltimore to their Harbor in ways that are engaging and inspire stewardship for the local waterway, wildlife and Chesapeake Bay restoration. There are many barriers associated with accessibility to the water; including transportation, awareness and overall acceptance. But by connecting residents to water in various ways through hands on restoration like oyster gardening it can encourage connections to a perceived lifeless environment.

Oyster gardeners, including adults and students from the Baltimore community learn about the local ecosystem, benefit of oysters to the water quality and in providing habitat for a variety of species in the Inner Harbor and Bay. Since the program began, hundreds of members of the public have participated, building their own cages and learning how to be oyster gardeners. Their cages are deployed along the piers of the Downtown Sailing Center and Baltimore Marine Centers' Lighthouse Point, and other locations around the Inner Harbor. Volunteers start growing baby oysters in the fall, filling wire cages with tiny oysters attached to old oyster shells and suspending the cages in the Harbor from piers and other structures. They maintain the cages throughout the winter. After nine months, the matured oysters are planted on a protected oyster sanctuary on the Patapsco River.

"Oysters are considered a ‘keystone species' in the ecosystem of the Chesapeake Bay," said Carmera Thomas, CBF Baltimore Program Manager. "But the oyster population has been decimated by pollution, over-harvesting, and disease so federal, state, and non-governmental organizations have teamed up to create large sanctuary reefs where oysters can grow in relative safety."

And participants are expanding their activities beyond harbor piers. In 2018, volunteers also helped paint murals and traveled to Annapolis to advocate for environmental legislation.

The Great Baltimore Oyster Partnership is part of the Healthy Harbor Initiative to inspire the City to explore, love, and clean the Baltimore Harbor, and a part of CBF's Maryland Oyster Gardening program. It includes members of the local business community, residents, and CBF members in Baltimore City. It also includes youth from schools around the city who are engaging groups on water quality issues in the Baltimore Inner Harbor specific to oysters and restoration in the Chesapeake Bay watershed.