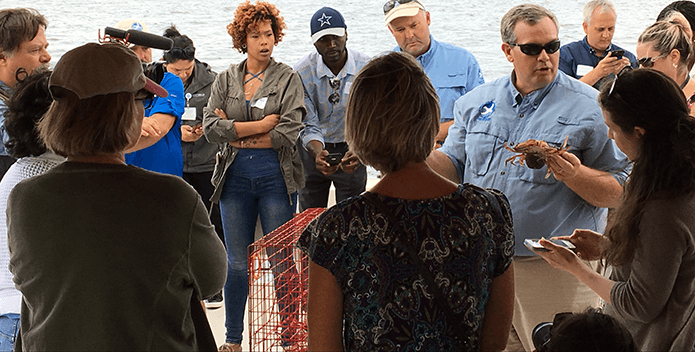 The Chesapeake Bay Foundation's (CBF's) Partnership to Restore Hampton Waterways has reduced polluted runoff, restored critical shoreline, and jump-started the restoration of native oysters in the city of Hampton, Virginia.

Hampton is located at the southern end of the Chesapeake Bay, a region where residents have long relied on waterways for food, recreation, economic well-being, and our nation's security. Hampton faces many challenges for water quality, including a dense population with approximately 138,000 residents living in a 51-square mile area. Polluted runoff from streets, parking lots, and buildings is one of the city's biggest threats to clean water. While the two-year grant that launched this project ended in early 2018, it supported efforts that continue to restore local waters

CBF worked with Hampton University and other partners to jumpstart oyster restoration activities in the Hampton River. Data from the program help CBF determine where oyster recruitment occurs in the river and where we should focus restoration efforts.

CBF engaged the Hampton community in a wide range of activities. Through these educational experiences and materials, CBF hopes that Hampton's leaders will take steps and make investments in managing stormwater pollution.

CBF is thankful to the National Fish and Wildlife Foundation for funding the Partnership to Restore Hampton Waterways project. We are also appreciative of our partners who have helped CBF meet the project deliverables, including the City of Hampton, especially the Department of Public Works; Hampton Roads Sanitation District; Hampton University; and NASA Langley Research Center.