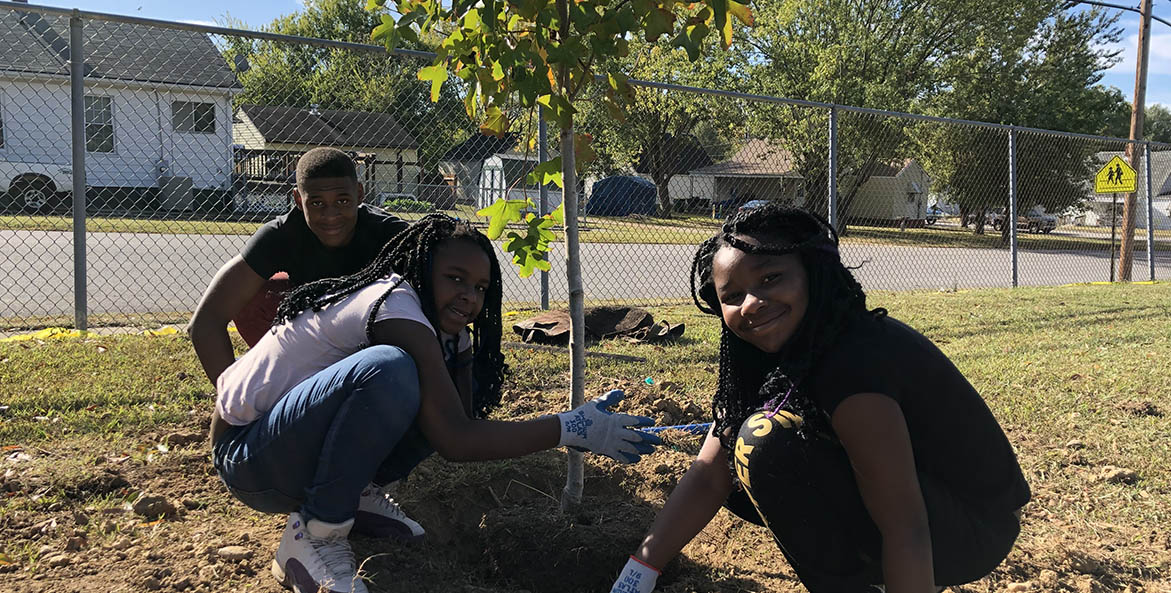 Once known for catastrophic industrial pollution, the small city of Hopewell, Virginia, is turning a new leaf. Since 2016, CBF has worked closely with the City of Hopewell and other partners to plant hundreds of trees, restore wetlands and streams, create community green space, decrease flooding,and reduce polluted runoff to the James and Appomattox rivers. The work is made possible thanks to two grants from the National Fish and Wildlife Foundation (NFWF) and a host of other supporters.

About 20 miles south of Richmond, Hopewell is home to 23,000 people on 11 square miles at the confluence of the Appomattox and James Rivers. The city developed into an industrial hub in the early 1900s, with many manufacturing giants, including DuPont, Allied Chemical, and WestRock, building their factories in Hopewell.

Like many older cities, much of Hopewell was built prior to requirements for stormwater management, resulting in large expanses of impervious surfaces with no stormwater controls. As a result, many streams within the city have suffered dramatic erosion. Pollution from decades of commercial use and economic disinvestment has reduced the environmental and aesthetic benefits local waterways could provide for residents. The increased flooding risk from stormwater runoff can cause repeated and costly damage to homes and businesses.

Unfortunately, the lack of stormwater controls and eroding channels contributed to the Virginia Department of Environmental Quality listing segments of the Appomattox River and the tidal James River on its “Dirty Waters List.” The Virginia Department of Health has placed the Appomattox River in Hopewell on its fish consumption advisory list for 23 species of fish due to PCB contaminations, and for all fish species because of Kepone contamination (Kepone is a pesticide manufactured by Allied Chemical and illegally dumped into Hopewell rivers in the 1960s and 1970s, eventually resulting in significant fines and closure of the river to fish harvest for years. The incident increased environmental awareness in Virginia and across the country.)

In 2016, a NFWF grant launched CBF efforts in Hopewell to plant trees, install rain gardens and rain barrels to reduce runoff, and reach out to local residents.

In 2018, the city, with the help of CBF and other project partners, completed its Riverside Park Greenway. This effort restored one of Hopewell’s oldest parks, connected the city marina to green space, and made progress towards the city’s Chesapeake Clean Water Blueprint goals by preventing significant amounts of pollutants and sediment from reaching local waterways.

We are now working with the city to build on this work, restoring eroding stream channels and reestablishing floodplain wetlands.

CBF has also committed to serve the diverse and low-income populations of Hopewell through our urban trees canopy initiative. Research shows that trees have benefits for pulmonary and cardiovascular health, mental health, and children’s birthweight—all issues that need to be addressed in Hopewell. CBF created a tree canopy assessment for the city in summer 2018. This assessment revealed a direct correlation between low-income areas and areas with a low percentage of tree canopy. These same census blocks also have lower life expectancies. Not surprisingly, the University of Wisconsin Population Health Institute’s County Health Rankings ranked Hopewell near the bottom of Virginia localities in terms of health outcomes

A second NFWF grant to CBF kept momentum moving forward in Hopewell from 2019 into 2021. This project engaged 280 volunteers on the following key initiatives:

Tree Stewards Program: CBF also established a Hopewell Tree Stewards program to make sure that these trees survive and thrive. In all, 12 volunteers have been trained as tree stewards who work with the city’s arborist to stake, water, prune, weed, and mulch the city’s trees. These tree stewards also identify future planting opportunities and trees that need to be replaced due to age or disease. The Tree Stewards curriculum was taught by Virginia Department of Urban Forestry Community Forestry Specialists, Virginia Cooperation Extension Urban Forestry Specialists, and Tree Stewards from neighboring localities.We were thrilled when the Tree Stewards were honored by Hopewell Mayor Jasmine Gore and the Hopewell City Council for completing the stewardship course and for committing to expand and preserve Hopewell’s tree canopy.

Tree Stewards have also been active on their own to increase tree canopy in Hopewell, showing how CBF’s project is creating a sustainable interest in expanding urban tree canopy. After training as a Hopewell Tree Steward, Stephanie Dayberry wanted to create a community orchard in Hopewell. CBF staff helped Stephanie work with the Hopewell Recreation and Parks Foundation to apply for funding from the Department of Forestry Trees for Clean Water Grant. The Foundation received the funding, and Stephanie spearheaded efforts to plant 25 fruit, nut, and shade trees to create the Woodlawn Learning Center Urban Orchard.

Community Tree Giveaway: CBF also enaged the wider city community by giving away approximately 400 bare-root trees, along with planting guides and tips, at community events. Everyone who received a tree signed a pledge to plant and care for them.

Stream Restoration Project: The city led a stream restoration project adjacent to Hopewell High School, Patrick Copeland Elementary School, and Mathis Park—the most heavily used city park. Between the schools and the park, this is one of the area’s most active community gathering spots. The project restored close to a quarter mile of actively eroding stream channel and re-established adjacent floodplain wetlands.City staff were able to leverage CBF’s grant funding to raise additional project funds from Virginia’s Stormwater Local Assistance Fund matching-grant program, as well as private funding from the Virginia Environmental Endowment to enhance the stream restoration project. The city’s work, helped in large part by CBF, has helped the municipality rebrand itself as environmentally-friendly. For example, the local newspaper featured a story in October 2019 about the city’s good stewardship work and in fall 2020, the Hopewell Restoration Project—the collaborative effort between CBF and the city of Hopewell—was recognized as the Best New Environmental Sustainability Program by the Virginia Recreation and Park Society.

Environmental Education: CBF and Hopewell City Schools trained teachers from the Hopewell area to develop Meaningful Watershed Education Experiences. CBF offered a five-day teacher professional learning course focusing on the cause-and-effect relationship between land use and stream channel erosion, and the resulting habitat loss and pollution to waterways. The stream restoration project provides a hands-on learning resource for both teachers and students.

Invasive Species Removal Events: Volunteers came together at two different events to remove invasive species threatening trees and plants at parks across Hopewell. The events were organized by CBF and Hopewell Stormwater and Recreation and Parks Departments.