Save Oyster Shells in Virginia 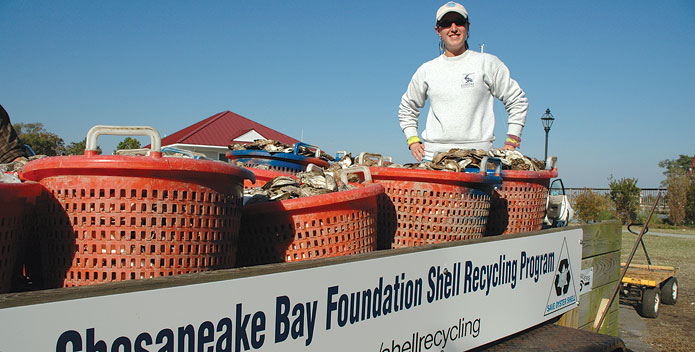 Oyster shells are literally the foundation of our reef restoration efforts! The Chesapeake Bay Foundation (CBF) needs your help–and your oyster shells–to restore native oysters in the Chesapeake Bay. Recycle your empty shells by dropping them off at the locations below so we can repopulate the Bay with more oysters.

Oyster shells are becoming increasingly scarce. Through the Save Oyster Shells recycling program, shells that would typically be thrown away are saved and used in a variety of oyster restoration projects.

There are several public shell recycling drop-off locations across Virginia. If you are interested in hosting a shell-recycling bin, contact CBF's oyster restoration office at 757-644-4125.

To participate or for more program information, contact Jackie Shannon at jshannon@cbf.org or 804-832-8804.

Expansion of oyster shell recycling across the state is supported by the Chesapeake Bay Restoration Fund, funded by the sale of Chesapeake Bay license plates. Shell collection in Norfolk is supported by Keep Norfolk Beautiful and Norfolk Waste Management. There are many other entities in Virginia that collect oyster shell and make restoration possible, including the Virginia Oyster Shell Recycling Program (VOSRP) at Virginia Commonwealth University's Rice Rivers Center and Lynnhaven River NOW. Learn more about their efforts and support them as they make use of this precious resource.