CBF's cutting-edge vessel will change how we bring back the Chesapeake Bay's native oyster population.

This oyster restoration center floats! The Chesapeake Bay Foundation’s innovative oyster barge travels from one river to the next, allowing CBF to restore local oyster populations more efficiently than ever before. As a result, CBF will plant millions more oysters as the Chesapeake Oyster Alliance works toward a goal of 10 billion new oysters in the Bay by 2025.

For years, CBF has done this oyster setting work at our Oyster Restoration Center on the campus of the Virginia Institute for Marine Science (VIMS), which has been a key partner in supporting restoration efforts. While CBF will continue some activities at VIMS, using the new barge for the majority of oyster setting work will increase efficiency and reduce travel time for oysters to many rivers where restoration is taking place.

The oyster barge will 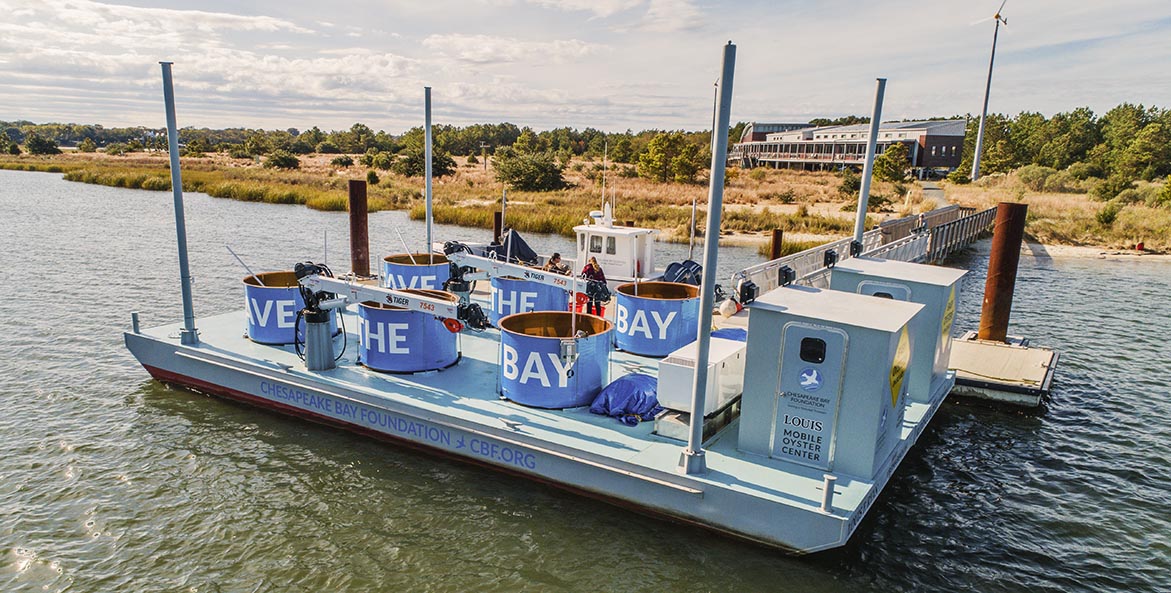 The one-of-a-kind mobile restoration center will allow CBF to produce and transplant up to 15 million oysters per year, double our current capacity in Virginia.

Q: Where can I see the oyster barge in action?

A: The oyster barge travels to Virginia rivers prioritized for oyster restoration, starting out on the Lynnhaven River. In the future it could travel to the Elizabeth River, Piankatank River, or other Virginia tributaries. On each river, CBF will work with the local community to find a location that works well both for neighbors and with the surrounding environment.

Q: When will the oyster barge's tanks be filled with baby oysters?

A: CBF began setting baby oysters in the barge's tanks during the 2020 restoration season, which runs from late spring through early fall.

A: The two 50-by-13-foot barges are pinned together to form a 50-by-26-foot floating center—large enough to support six 850-gallon setting tanks, two cranes, and room to work.

Q: What are the cranes for?

A: The cranes are used to lift pallets of recycled oyster shells and to load heavy concrete oyster reef balls, which are a great way to quickly build three-dimensional oyster habitat.

Q: Will the oyster barge be open to the public?

A: The oyster barge will be open to volunteers looking to get involved in oyster restoration, and for educational opportunities for students and members of the community.