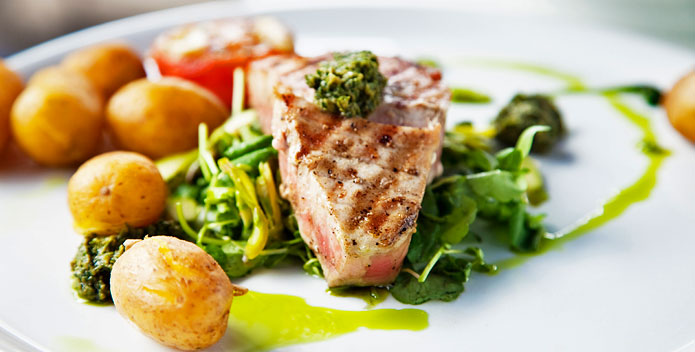 Mercury In Our Food

In the Chesapeake watershed, mercury is responsible for more waters listed with fish consumption advisories than any other pollutant. Practical, cost-effective solutions can protect both public health and the natural resources of the Chesapeake Bay.

Mercury in the Environment

Mercury is a highly toxic chemical, especially to the developing nervous system, and can cause IQ deficits in children. For this reason, fetuses, infants, children, and women of childbearing age are at greatest risk.

Mercury increases in concentration as it moves up the food chain as wildlife, fish, and people consume contaminated food. For example, the amount of mercury in fish tissue can be more than a million times higher than in surrounding water.

Though mercury is a naturally occurring element, two-thirds of the mercury moving through the environment is a product of human activities. In many cases, contaminated waters are in areas considered "pristine" with very little human activity or industry.

Although nearly all fish and shellfish contain trace amounts of mercury, they also contain high-quality protein and omega-3 fatty acids. So, make fish part of your healthy diet, but be conscious of your risk factors, avoid fish with higher mercury levels (like swordfish and shark), and check local advisories on fish you catch in local waters.

Where Is the Mercury Coming From?

One answer is: the air. According to the Environmental Protection Agency (EPA), coal-fired power plants are the largest source of mercury air emissions in the U.S., accounting for more than 40 percent of the pollution. Mercury is found in coal. And when coal is burned to make electricity, mercury flows out of the smokestacks of power plants and other coal-burning sources and is washed by rain into the Chesapeake Bay and other waterways.

In December 2011, EPA Administrator Lisa Jackson unveiled the nation's first air pollution standards for mercury and other chemicals emitted from power plants. The regulations were mandated by Congress in the 1990 Clean Air Act Amendment, but faced roadblocks from litigation and lobbying.

The Mercury and Air Toxic Standards (MATS) rule would have required power plants to cut mercury emissions by at least 90 percent. CBF and others sued EPA to get these rules in place. EPA predicted as many as 11,000 fewer premature deaths per year, along with the potential for 46,000 short-term construction jobs and 8,000 new permanent jobs in the utility industry associated with the installation and maintenance of pollution controls. This would have been good news for us, the fish we eat, and the air we breathe.

The rule was held up in court for five years as the coal industry and its allies fought to derail the regulations, claiming that EPA cannot even decide whether to address major hazards to public health and the environment without first considering the effect on the industry's bottom line. CBF and other environmental groups intervened throughout these court challenges.

In April 2016, EPA completed an economic analysis supporting the rule and submitted its Supplemental Findings. However, after more industry group challenges and a reconsideration by the Trump Administration, EPA published proposed revisions in February 2019. In April, 2020, EPA determined that it is no longer “appropriate and necessary” to limit toxic air emissions of mercury from coal- and oiled-fired power plants and reversed the legal justification of the 2012 Mercury and Air Toxics Standards (MATS) rule based on a flawed cost-benefit assessment. CBF stated our opposition to the decision in a press release, calling it "irresponsible and carries dangerous implications not only for the Chesapeake Bay, but for future regulation of all hazardous pollutants." EPA published the final rule in May, 2020.

EPA's reversal will increase mercury emissions within the Chesapeake Bay airshed, thereby increasing the amount of mercury in watershed fisheries and a health risk to individuals who consume contaminated fish. In addition, the final rule conflicts with the toxics reduction goal of the 2000 Chesapeake Bay Agreement and Section 117(g) of the Clean Water Act as there would be an increase in toxic emissions from coal-and oil fired power plants.

Mercury in fish harvested from the Chesapeake Bay and its tributaries is a real concern. An accumulation of toxic mercury in humans can cause damage to the brain, kidney, and lungs.

This infographic shows how mercury travels from power plants to the air and into waterways, only to contaminate plankton and fish which are then consumed by people. Click image to view larger. 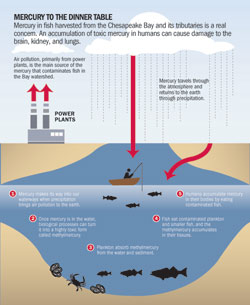