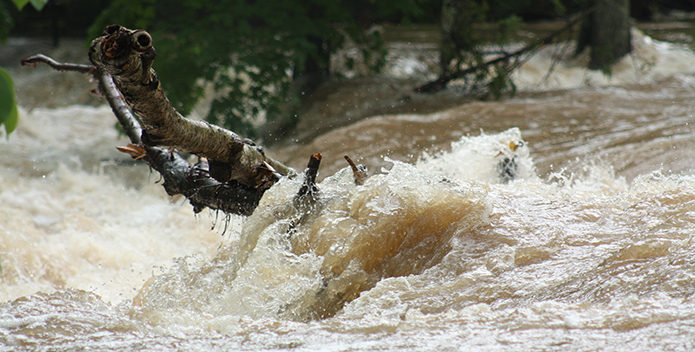 Raging waters like this from extreme weather events are more likely in the future due to climate change.

New Challenges to a System Already Under Stress

In November of 2018, a new U.S. report established that climate change is very real and that it is affecting our natural environment, human health, and welfare across the country and the globe.

Human-induced climate change must be addressed now. CBF's 2018 State of the Bay report demonstrates how extreme weather and increased pollution, due in part to climate change, can negatively affect the Bay. Multiple federal agencies in the Trump Administration recently worked together to issue a definitive report documenting the serious nationwide impacts. Left unchecked, climate change threatens Bay recovery, our economy, and our very existence. We urge Congress to demand immediate action to reduce greenhouse gas emissions.

The Chesapeake region is home to 18 million people, thousands of species, including the bald eagle and blue crab, and unique cultures—from watermen to congressmen to small farmers—who live on and around the Bay. It is a national treasure, but also seriously threatened by pollution and development. Climate change adds new challenges to an ecosystem already under stress.

According to the Intergovernmental Panel on Climate Change, warming temperatures and sea level rise—alongside unpredictable weather patterns and increased storm intensity—are a reality. The panel also confirms that human activity is to blame. And we may be seeing the effects upon the Chesapeake Bay and its rivers and streams. In November of 2018, a new federal report concluded that "climate change is affecting the natural environment, agriculture, energy production and use, land and water resources, transportation, and human health and welfare across the U.S. and its territories."

That reality is very visible to those living on the Bay. Smith Island and Tangier Island are inhabited islands in the mid-Bay. Residents of Smith and Tangier are losing their homes. They're losing their islands to sea level rise. Other previously inhabited islands, such as Holland's Island, are completely submerged. On the property of the Chesapeake Bay Foundation in Annapolis, Maryland,  several dozen acres of pine forest have been claimed by rising waters in just the last 25 years.

Here are just a few of the impacts the Bay region is already experiencing.

The good news is that there are solutions at hand. The fight to reduce the greenhouse gases that cause climate change is not unlike the challenge we face in cleaning up and restoring the Chesapeake Bay and its rivers and streams. And many of the solutions are the same.

A recent study conducted at Yale University in partnership with CBF shows that by implementing a handful of the agricultural conservation programs called for in the Chesapeake 2000 Agreement, Bay area states could safely sequester—or store away—4.8 million metric tons of carbon dioxide.

(Pounds of Carbon per Acre per Year)

This chart shows how many pounds of carbon dioxide five key agricultural conservation programs can sequester, per acre, per year.

This is equivalent to the amount of annual carbon dioxide emissions from residential electricity across Delaware, or the carbon dioxide released by over three quarters of a million (approximately 786,000) Hummers, driving 12,000 miles each, in a given year. The conclusion is clear: Protecting the Bay also helps fight climate change.

Implementing these agricultural practices will have the dual benefit of restoring water quality in the Chesapeake, its rivers, and streams and also serve as an immediately applicable tool in reducing greenhouse gases.

To avoid the more catastrophic effects of climate change, our leadership must step up to the plate and address emissions from residential energy use, transportation, and commercial building operations.

The Bay is a national treasure, and protecting it, as this report shows, will also help the global fight against climate change.