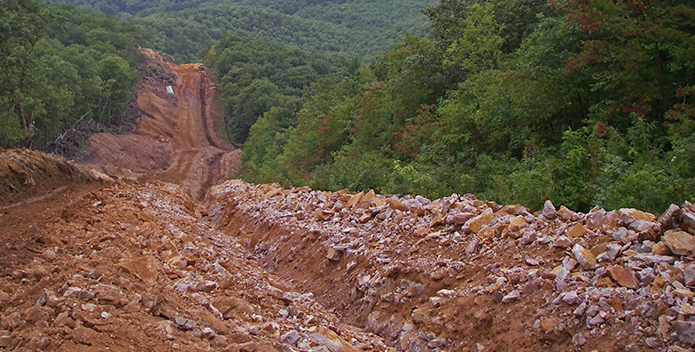 A trench for a new natural gas pipeline cuts through miles of forest.

Safeguarding Our Forests and Local Waters

As energy companies across the nation position themselves to tap into our country's natural gas reserves, many residents and environmentalists are concerned about the potential problems associated with extracting this valuable resource. No one disputes the need for local clean, efficient energy resources. But there are concerns over the land and water impacts that the infrastructure associated with natural gas drilling may cause. Natural gas infrastructure includes the construction and operation of hundreds of miles of pipeline, as well as compressor stations, well pads, and access roads.

Natural gas production requires a network of pipelines to transport the natural gas throughout the Eastern United States. In order to meet the increase in production of natural gas in the Marcellus Shale, numerous pipeline projects are planned for the Bay watershed and surrounding region. The proposed pipelines cross hundreds of miles of rivers and streams, forests, farm land, and private land throughout the watershed. Among the many pipeline projects that are partially or fully within the watershed are the following large proposals:

The Concerns About Natural Gas Pipelines and Infrastructure

Some of the potential problems associate with natural gas pipelines and infrastructure include:

These and other challenges underscore the need for comprehensive analysis of the environmental and quality of life impacts of natural gas pipeline and infrastructure development across the Chesapeake Bay watershed.

CBF does not oppose natural gas development if done safely, nor have we called for a permanent ban on gas development in the region. Instead, we have embraced the precautionary principle. Our over-arching goal is to ensure that future energy development in the Chesapeake Bay region takes place in as safe and environmentally responsible a manner as possible.

CBF has commented on individual natural gas pipeline projects asking FERC to carefully consider the cumulative impacts and to use a strategic approach in authorizing the construction of natural gas pipelines and infrastructure in the region so as to ensure the least amount of environmental harm possible. 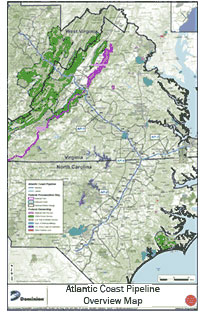 This map shows the location of the proposed 550-mile Atlantic Coast Pipeline. This is one of many pipeline projects running through the Chesapeake Bay watershed.