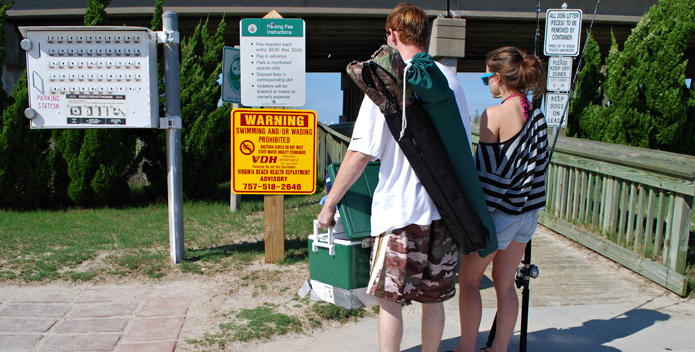 A Virginia Beach sign posted by the Virginia State Department of Health warns people against bathing or wading in the water after high bacteria levels were discovered.

Restoring the Bay Is Imperative to Human Health

There's no denying it: Our environment and our health are intrinsically linked. Clearly, dirty waters are not only unhealthy for the fish, oysters, and crabs that live in them, they are unhealthy for the people who fish, swim, boat, and drink them. The restoration of the Chesapeake Bay and its rivers and streams is vital to the protection of our human health.

Polluted runoff not only causes low oxygen "dead zones" in the Chesapeake, which suffocate marine life such as crabs, oysters, and fish, it can also contaminate private drinking wells. In fact, recent studies found that between 21 and 60 percent of wells tested in Pennsylvania's lower Susquehanna River Basin had nitrate levels exceeding public drinking water standards. Drinking water with too much nitrates can raise the risk of cancer, nervous system deformities in infants, hemorrhaging of the spleen, and other problems.

Surface waters and drinking water reservoirs also can be impacted. For example, Octoraro Creek in Pennsylvania used to supply clean drinking water to Philadelphia, but the creek has become so high in nitrates from farm runoff that authorities dilute it with water from a cleaner stream before piping it to the city.

Forest loss in the Chesapeake region also poses substantial risks to clean drinking water. The forests in the watershed protect and filter drinking water for 75 percent of watershed residents—13 million people—but we are losing our forests to development.

In the Chesapeake region, governments have issued statewide fish-consumption advisories for mercury for all lakes and rivers in Pennsylvania and Maryland, and for many rivers in Virginia. This heavy metal, often released by the burning of coal, pollutes waterways, taints fish, and can potentially damage human intelligence. Shellfish beds also can be polluted by runoff from the land. Oyster and clam beds often are closed to harvest because the meat is too high in bacteria. This problem could get worse as the water warms from climate change.

Coal-fired power plants pose substantial human health risks, such as illnesses, premature deaths, health-related costs, and so on. In the U.S., an estimated 20,000 heart attacks and 13,200 premature deaths per year are caused by fine particle pollution from coal-fired power plants. Living downwind of a power plant or industrial plant can be like living with a smoker, causing asthma and other lung conditions, according to a report commissioned by CBF. The annual cost of these illnesses and deaths has been estimated between $62 billion and $100 billion, with the toll falling heaviest on children and elderly. Air pollution, primarily from power plants, is also the main source of the mercury that contaminates fish.

Our Way of Life

The combination of warmer waters, nutrient pollution, animal waste, and sewage contribute to the growth of harmful bacteria in our waters such as Vibrio (a bacteria that can cause life-threatening skin and blood infections and intestinal illnesses), Cyanobacteria (a blue green algae that can cause liver disease, skin rashes, nausea, and vomiting), and Cryptosporidium (a protozoan that can cause gastro-intestinal illness). Nutrient pollution is caused by an excess of nitrogen and phosphorous from many sources, including stormwater runoff from streets, farm fields, barnyards, and lawns; discharges from sewage treatment plants, septic tanks, and industries; and air pollution from power plants, factories, and vehicles. This pollution affects our way of life. In Maryland, residents are cautioned not to swim in the Bay or its tributaries for 48 hours after a significant storm because the water likely will be high in bacteria from polluted runoff.

The Cost of Dirty Water

According to the Journal of Environmental Management, clearly polluted waters can lead to substantial medical costs and lost wages in addition to poor health, such as:

What We Have to Lose