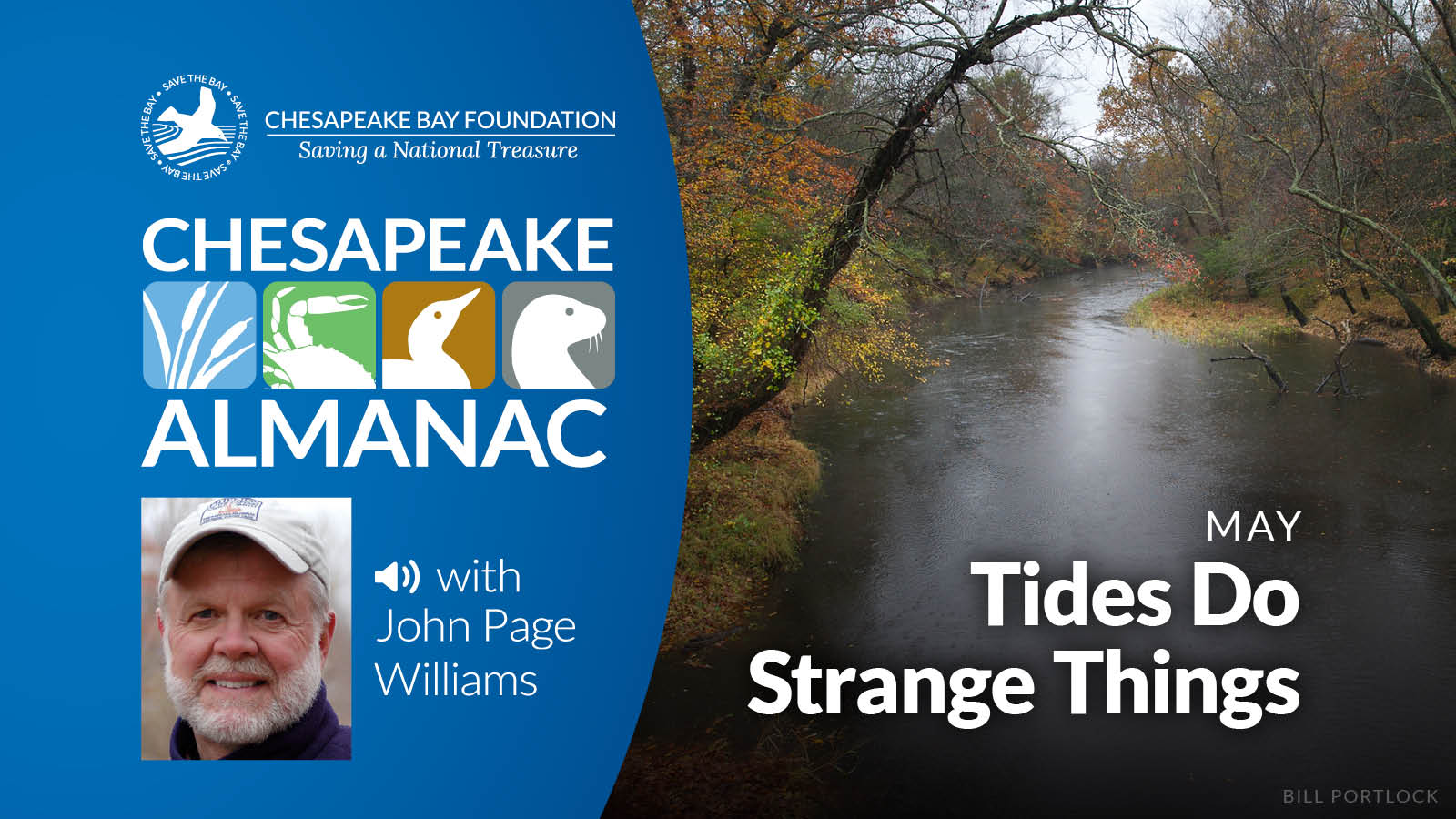 This is John Page Williams with another reading from Chesapeake Almanac. The month is May and this sketch is entitled "Tides Do Strange Things."

Walkerton is a sleepy little town on the Mattaponi River in King and Queen County Virginia. Up through the early part of the 20th century it was a river port for steamboats and lumber schooners, but the highways took over, and the boats quit calling at the town. Walkerton is 30 miles above West Point, where the Mattaponi meets the Pamunkey to form the York, and it is another 28 miles down the York to the Chesapeake. So the water at Walkerton is completely fresh, with lily pads and wild rice growing in the nearby marshes. It is easy to forget that the town has any connection with the Bay at all. But Walkerton has a major claim to fame. In the tide tables published each year by the National Oceanic and Atmospheric Administration, it has the highest average daily tide change of any location on the Chesapeake--3.9 feet--and more on a new or full moon, higher, even, than the three-foot average at the mouth of the Bay.

It's hard enough to understand how a river can be fresh and still tidal, but for a freshwater town to have a such a strong tide is startling. The river's narrow, deep channel seems to accentuate it. In summer, the boys just up river at Camp Whitehall have to plan their day's schedule around it, waterskiing and swimming on high water, exploring the marsh guts by canoe on low, and always trying not to have to paddle against the powerful current, whichever way it's flowing. Anyone around Walkerton who remembers the schooners has great admiration for the captains who could negotiate that tide and that strong current in such a narrow channel under sail.

The double phenomenon of strong tide and fresh water is the same on all the Chesapeake's other big rivers, though the tide changes are not as great as on the Mattaponi. By the way, the second highest change, which is nearly the same, is on the Nansemond River at Suffolk, Virginia. Anyone who spends any time on these waters puzzles over it. We all start thinking of tide as water flowing in from the ocean and then back out. But when a river's own freshwater flow from its watershed gets into the picture, things start to get confusing.

Tides are waves, moving bulges in the surface of the water. All boaters are familiar with the waves that come from wind and the wake that forms as a hull moves through the water. These are short-period waves. They come every few seconds, and we're usually aware of the times when one set of waves gets superimposed on another.

By contrast, tides are long-period waves, with their peaks traveling about 12 hours and 25 minutes apart on the Chesapeake. They develop primarily as the moon moves around the earth. It literally pulls a bulge of high water as it goes and trails a following trough of low water. We can visualize the bulge and its following trough moving across the ocean, but once this pair starts to move through the confined and semi-confined waters like the Bay and its rivers, the pattern gets more complicated.

In the Bay, the tide will affect any waterway whose surface is at sea level; that means that it will reach up to the heads of navigation on the rivers, where the riverbeds meet sea level.  But the rivers are carrying great quantities of fresh water downhill out of their watersheds. When the fresh water reaches sea level, it pushes the salt water in the river's lower basins downstream. The distance varies with the power of the individual river and with rainfall.

The fresh water is now at or below sea level, so it's affected by the tide's moving bulge and trough, hence the tidal fresh sections of the rivers. When it reaches the denser salt water, it flows up and over and mixes with it, at the same time continuing to move downstream and thereby creating the Bay's two-layered system. The tidal current will push it back upstream for a time, but the net movement is down, so it does flow all the way to the ocean.

Thus Walkerton has a tide, but why is it so strong? Helping to answer that question is another familiar phenomenon: short-period waves coming into shallow water become steeper before breaking on shore. Apply that concept to tides as long-period waves. As a tide wave travels up the Mattaponi it becomes more and more confined by the narrowing channel and by the riverbed, which is gradually becoming shallower, so it gets steeper and steeper. If the channel is just the right length from one wave's peak to the next, each wave will be able to develop fully without interference from the next one coming up and may even be reinforced by it. If not, the two will get into each other's way and damp themselves down. The shape and length of the Mattaponi together lend themselves well to tide wave development, giving Walkerton its place in the tide tables. Remember, though, that most of the Bays rivers have strong tidal currents.

The long-period wave concept explains another puzzling characteristic of the rivers: slack water does not necessarily correspond to the time of highest or lowest water level. As the tidal wave travels up rive, the crest produces high water at successive locations, but the wave continues moving, so the current continues upriver even as the water level starts to drop. As the trough approaches, the water from the upriver crest begins to run back downhill, assisted by the river's downstream flow from its watershed. This flow may continue after the wave's trough passes, at low water.

Thinking about tide as a twice-a-day wave answers a lot of questions. Some are casual, the kind that form in the mind while sitting on a dock, looking at the water. Others are more directly useful, whether to the river fisherman trying to decide which side of a wharf piling his or her quarry will be on, or the racing skipper playing the complex currents around the Bay Bridge, or the boys and counselors at Camp Whitehall. Most of the Bay's creatures have developed specific behaviors to take advantage of the tides. We do well to follow their examples.